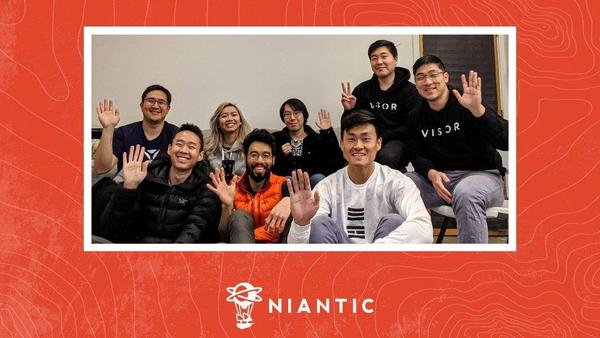 Niantic
2021/01/05(Niantic official website)
Welcoming Gaming Community Platform Leader Mayhem to Niantic
Today, I'm excited to announce the acquisition of Mayhem and welcome a group of talented creatives to Niantic. As part of Niantic, the Mayhem team's expertise in designing social gaming experiences and passion for online community building will drive the creation of new ways for our growing global community of players to connect and play.

Mayhem was founded in 2017 with the goal of bringing gamers together through live, interactive experiences. They built a successful online platform for gamers to self-organize custom game formats for their communities, and it's their innovative leadership in this space that will accelerate the work we're doing to inspire people to explore the world together. Real-world social interaction, as encouraged by fun gameplay as well as social features that build bonds between people across the globe, is critical to our mission--and alongside Mayhem, we have some exciting opportunities ahead of us.

Through our games, many Niantic explorers have found incredible meaning in playing and interacting with other explorers. They create memories, they make friends, and they end up with some amazing stories to tell. We look forward to working together with Mayhem to amplify those moments, bring our player community closer together, and make a positive impact on the world.

To learn about what this means for Mayhem, you can read the blog post from Mayhem's CEO, Ivan Zhou.

Iam excited to announce that Mayhem has been acquired by Niantic! The team will be joining Niantic to continue building new social experiences that will amplify and connect the global community of Niantic explorers. We will be bringing our proven expertise in creating community-focused products to Niantic, and look forward to unlocking brand new ways for players to create memories with their friends and families, meet new people, and connect with each other.

As part of the acquisition, we will be sunsetting Mayhem as a standalone product in February so we can focus our energy on a shared vision at Niantic and drive new innovations in social for AR real-world gaming. To all of our players, thank you for letting us build Mayhem with you. Over the years, you have always guided us towards a bigger vision of what we could accomplish, and your passion and creativity taught us so much about what it means to bring people together.

The Beginning
When my cofounder Anhang Zhu and I started the company three and a half years ago, our mission was to reimagine the way people interfaced with games and bring players together in a meaningful way. As lifelong gamers, we had front row seats to the explosion of today's online multiplayer formats. From titles like Warcraft, Quake and StarCraft launching in the 90's to the release of mods like Counter-Strike and Dota -- these games transformed the industry. But despite the accelerated evolution of content over the last two decades, the way that people played together had barely changed at all. Developers focused on elevating the gameplay experience, but the core social connections between players formed and persisted externally on platforms like Reddit, Twitter, Twitch, YouTube, Facebook, and Discord. Although games functioned well as a catalyst, the social fabric that holds people together was fragmented, and ultimately disconnected from the games.

In 2017, Anhang and I set out to solve this problem by building a product that could interface directly with a game to surface gameplay data in real-time and unlock a new category of interactive experiences.

Our first product, Visor, augmented the game experience using a combination of overlays, visual alerts, and audio cues to provide instant performance feedback during gameplay. Think J.A.R.V.I.S., but for gamers! We spent 18 months building the product with our users across numerous iterations before we found what felt like product-market fit. But as we watched tens of thousands of gamers adopt Visor in the first few weeks, something unexpected happened. We originally believed that game data was the key to unlocking new first party experiences like real-time feedback, but instead, our users were orders of magnitude more interested in leveraging that data to engage with their friends, share stats, and improve by playing together. So instead of quickly expanding Visor to support our next game, we took a step back, aligned our focus with that new insight, and started building towards what eventually became Mayhem.

Since we first started the company, it took us a little over two years and six product iterations before we succeeded in building the Mayhem that exists today. Over that time, the common thread that connected all of our products was the core understanding that games were at their most powerful when they brought people together and helped them form deep connections through meaningful interactions.

Building Mayhem, Joining Niantic
In July 2019, we launched Mayhem to a small community of several hundred people that played games together every day. Within one week of launch, we knew we were on the right path because the product was instantly co-opted by the community. Even though the first version was just a simple community leaderboard, hooked up to a game, and updated in real-time, our early adopters took that and ran away with it. Since then, we've scaled Mayhem to thousands of communities, giving millions of gamers a deeper way to connect with each other. We have been humbled time and time again by the support, feedback, and creative ways people have used Mayhem with their communities from weekly game nights to events with tens of thousands of concurrent players, and everything in between.

Our community of creators taught us the importance of designing the right environment, not just creating an ephemeral, multiplayer experience. Persistent environments become a home, a place that bridges the before, during, and after, whenever people play together. So in the beginning of 2020, we doubled down on communities to create a home for our users, while laying the foundation to go beyond.

When the pandemic hit, it became very clear that although people were spending more time on Mayhem and playing games generally, shelter in place was also creating a pervasive sense of isolation. Anxiety and depression increased globally as unprecedented physical distancing became both a partial solution to Covid-19, but also a stark reminder of what it feels like to seek connection while being apart. Although we could see how we were helping people connect and play with their communities, our whole team wanted to do more. We launched support for several more game titles, built deeper integrations with partners like Reddit, and expanded support for mobile. All the partners we worked with were in the same boat, looking for ways to help the world around them feel a little closer. We were able to collaborate with dozens of teams from game publishers to esports organizations, but the team that stood out the most was Niantic.

In every conversation with Niantic, we were surprised to find ourselves consistently using the same words to describe a similar vision of the future. One specific moment stood out to me the most. In one of my calls with Kei, Niantic's VP of product, I learned that when his home town in Japan was hit by a natural disaster, thousands of players in the Niantic community used Ingress as a way to gather people together in the city to help with local economic recovery efforts. This portrait of people empowered by a Niantic game giving back to a community was so clear, that I couldn't help but connect the common thread between our own product and Niantic's. In this new shared vision, games didn't just connect people online - they could physically move people and bring them together in real life. It became obvious to our team that Niantic would be one of the most important companies shaping how people interact with each other in the future. The opportunity to expand our vision, and connect people wherever they are, was just too exciting to let pass. So today, we're thrilled to join forces with Niantic and help create experiences that build meaningful, real-life bonds between people around the world.

I'm excited to begin working with, and learning from, so many talented people across Niantic, including Kei, Yuji, Dennis, Charu, Jeff, and Meghan, and of course under the guidance and leadership of John, Megan, and Mike.

Thank you
As we take this next step forward with Niantic, I want to acknowledge how grateful I am to have been on this journey -- only now can I connect the dots looking back. So many things needed to go right that we couldn't have controlled, and so many people had to come together for us to accomplish what we did. Over the last four years, we pioneered a whole set of new products and experiences that connect people closer to their favorite games and to each other. I'm so proud of what we've created, and even more so of the people on this journey with us. I am forever grateful for the team that helped build Mayhem from the ground up: Eugene Oh, Eric Yuan, Zenas Han, Michael Chen, Yvonne Ko, Ray Wu, Hynek Jemelik, and Nate Jones. Thank you!

Thank you to each and every single member of the Mayhem community. You turned our product into your home and helped us build an incredible experience for everyone. Your partnership and support along the way inspired us to focus on big, exciting problems and will continue to drive us forward at Niantic.

We also wouldn't be here today without our world-class team of investors and advisors, who gave us the capital, time, and wisdom when we needed it most. Thank you so much -- Amit Kumar from Accel, Anamitra Banerji and Gaurav Jain from Afore Capital, Jon Bassett, Lisa Cuesta, and Callum Booker from NextGen VP, Michael Seibel and Gustaf Alstromer from Y combinator, Kevin Lin, Ruchi Sanghvi and Aditya Agarwal (via South Park Commons), Paul Buchheit, Paul Levine, Jeffrey Rosen, John Graham, Amy Buechler, Wei Zheng, and Pek Pongpaet. It was an honor to have each of you as partners on the journey with us.

And finally, thank you to our better halves Lydia and Sophia. You made the road we traveled a lot less bumpy, and the destination even more worthwhile.

Niantic
2021/01/05 23:00(Twitter)
We are delighted to welcome the team from Mayhem to Niantic! Community is essential to us, and we are excited to continue to pioneer real world social experiences with them. Learn more here: https://nianticlabs.com/blog/mayhemgg