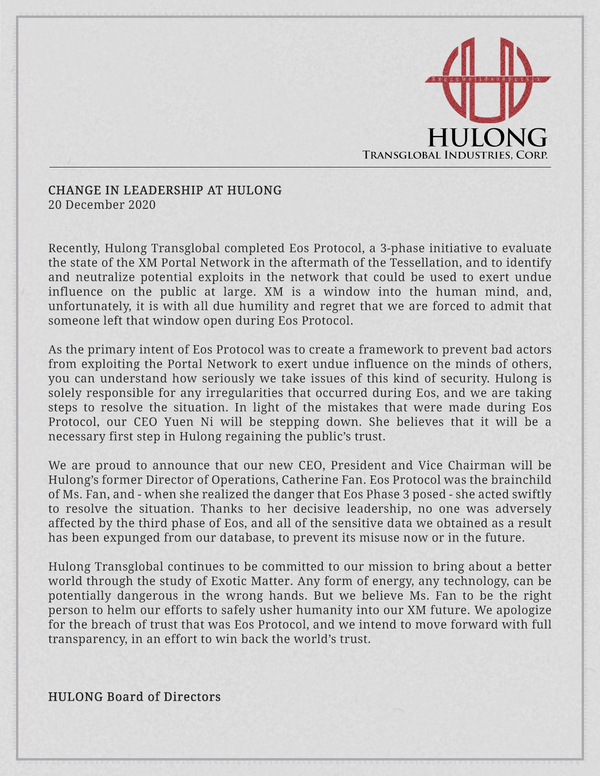 Truthseeker
2020/12/21 13:27(Forum)
Changes in Leadership at Hulong
Truthseekers: This was not what I expected, especially since the last Hulong transcript between Ni and Smith suggested the entire opposite. If Ni was blind sighted by Fan as she claims to be in her conversation with Smith, this would be at least the second time that she took the fall for her employee. What could be the factors behind the Board's decision in choosing Fan over Ni?

CHANGE IN LEADERSHIP AT HULONG
20 December 2020

Recently, Hulong Transglobal completed Eos Protocol, a 3-phase initiative to evaluate the state of the XM Portal Network in the aftermath of the Tessellation, and to identify and neutralize potential exploits in the network that could be used to exert undue influence on the public at large. XM is a window into the human mind, and, unfortunately, it is with all due humility and regret that we are forced to admit that someone left that window open during Eos Protocol. As the primary intent of Eos Protocol was to create a framework to prevent bad actors from exploiting the Portal Network to exert undue influence on the minds of others, you can understand how seriously we take issues of this kind of security.

Hulong is solely responsible for any irregularities that occurred during Eos, and we are taking steps to resolve the situation. In light of the mistakes that were made during Eos Protocol, our CEO Yuen Ni will be stepping down. She believes that it will be a necessary first step in Hulong regaining the public's trust.

We are proud to announce that our new CEO, President and Vice Chairman will be Hulong's former Director of Operations, Catherine Fan. Eos Protocol was the brainchild of Ms. Fan, and-when she realized the danger that Eos Phase 3 posed -she acted swiftly to resolve the situation. Thanks to her decisive leadership, no one was adversely affected by the third phase of Eos, and all of the sensitive data we obtained as a result has been expunged from our database, to prevent its misuse now or in the future.

Hulong Transglobal continues to be committed to our mission to bring about a better world through the study of Exotic Matter. Any form of energy, any technology, can be potentially dangerous in the wrong hands. But we believe Ms. Fan to be the right person to helm our efforts to safely usher humanity into our XM future. We apologize for the breach of trust that was Eos Protocol, and we intend to move forward with full transparency, in an effort to win back the world's trust.