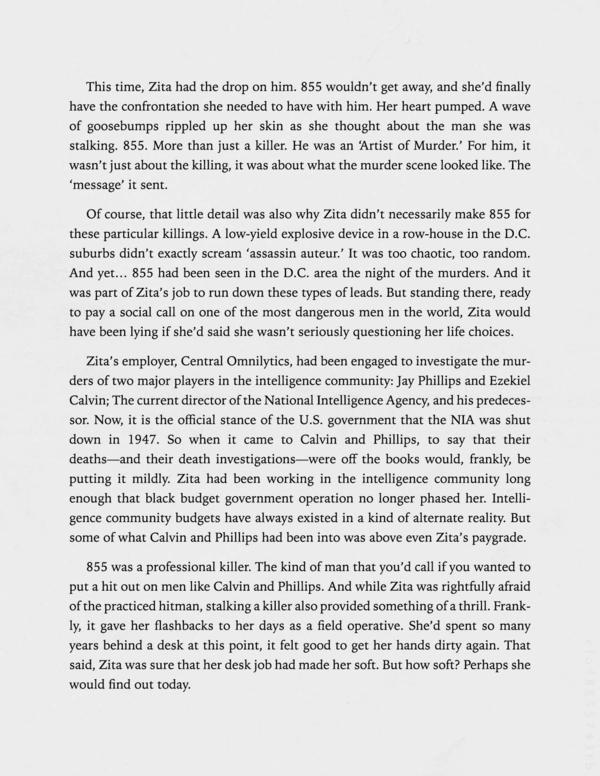 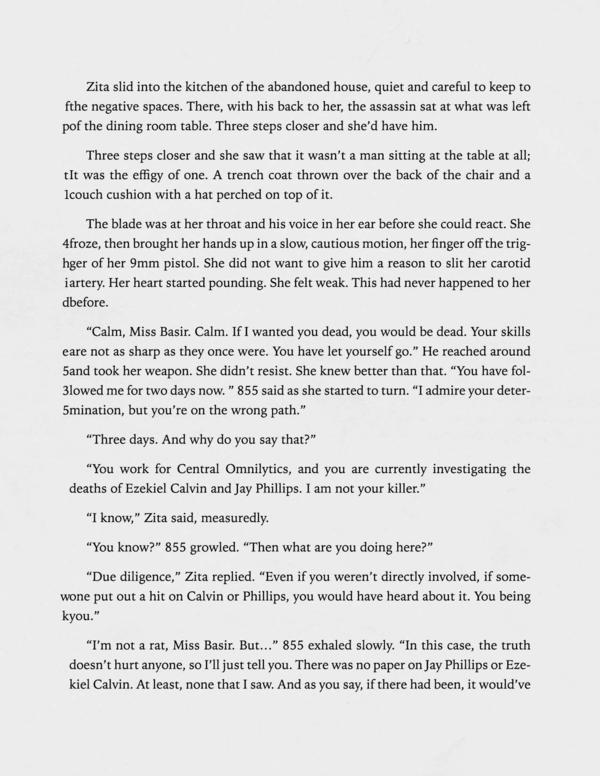 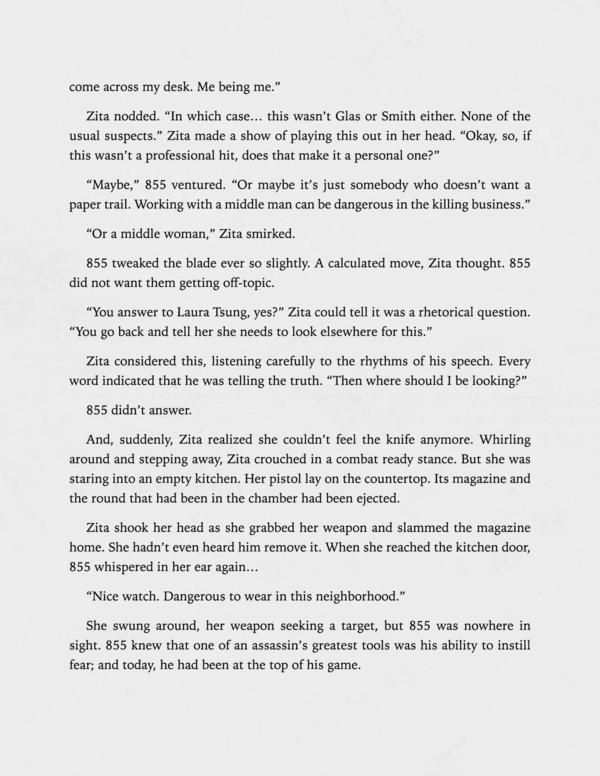 TheHiveMind
2020/11/23 19:18(Forum)
A Peek into Alternate Pasts
Here is what was discovered by "the usual suspects" of the Resistance.
https://storage.googleapis.com/truthseeker/EosProtocol/Mystery/BTSC_PAC/MANIA_interceptedNov20_knb7d4r0zs.pdf
You sure know how to obscure. A fun ride as usual.

Transcript
This time, Zita had the drop on him. 855 wouldn't get away, and she'd finally have the confrontation she needed to have with him. Her heart pumped. A wave of goosebumps rippled up her skin as she thought about the man she was stalking. 855. More than just a killer. He was an'Artist of Murder.'For him, it wasn't just about the killing, it was about what the murder scene looked like. The 'message'it sent.

Of course, that little detail was also why Zita didn't necessarily make 855 for these particular killings. A low-yield explosive device in a row-house in the D.C. suburbs didn't exactly scream'assassin auteur.'It was too chaotic, too random. And yet... 855 had been seen in the D.C. area the night of the murders. And it was part of Zita's job to run down these types of leads. But standing there, ready to pay a social call on one of the most dangerous men in the world, Zita would have been lying if she'd said she wasn't seriously questioning her life choices.

Zita's employer, Central Omnilytics, had been engaged to investigate the murders of two major players in the intelligence community: Jay Phillips and Ezekiel Calvin; The current director of the National Intelligence Agency, and his predecessor. Now, it is the official stance of the U.S. government that the NIA was shut down in 1947. So when it came to Calvin and Phillips, to say that their deaths and their death investigations were off the books would, frankly, be putting it mildly. Zita had been working in the intelligence community long enough that black budget government operation no longer phased her. Intelligence community budgets have always existed in a kind of alternate reality. But some of what Calvin and Phillips had been into was above even Zita's paygrade.

855 was a professional killer. The kind of man that you'd call if you wanted to put a hit out on men like Calvin and Phillips. And while Zita was rightfully afraid of the practiced hitman, stalking a killer also provided something of a thrill. Frankly, it gave her flashbacks to her days as a field operative. She'd spent so many years behind a desk at this point, it felt good to get her hands dirty again. That said, Zita was sure that her desk job had made her soft. But how soft? Perhaps she would find out today.

Zita slid into the kitchen of the abandoned house, quiet and careful to keep to fthe negative spaces. There, with his back to her, the assassin sat at what was left pof the dining room table. Three steps closer and she'd have him.

Three steps closer and she saw that it wasn't a man sitting at the table at all; tlt was the effigy of one. A trench coat thrown over the back of the chair and a lcouch cushion with a hat perched on top of it.

The blade was at her throat and his voice in her ear before she could react. She 4froze, then brought her hands up in a slow, cautious motion, her finger off the trig? hger of her 9mm pistol. She did not want to give him a reason to slit her carotid iartery. Her heart started pounding. She felt weak. This had never happened to her dbefore.

"Calm, Miss Basir. Calm. If I wanted you dead, you would be dead. Your skills eare not as sharp as they once were. You have let yourself go." He reached around 5and took her weapon. She didn't resist. She knew better than that. "You have fol3lowed me for two days now. " 855 said as she started to turn. "I admire your deter- 5mination, but you're on the wrong path."

"Three days. And why do you say that?"

"You work for Central Omnilytics, and you are currently investigating the deaths of Ezekiel Calvin and Jay Phillips. I am not your killer."

"Due diligence," Zita replied. "Even if you weren't directly involved, if some? wone put out a hit on Calvin or Phillips, you would have heard about it. You being kyou."

"I'm not a rat, Miss Basir. But...'' 855 exhaled slowly. "In this case, the truth doesn't hurt anyone, so I'll just tell you. There was no paper on Jay Phillips or Ezekiel Calvin. At least, none that I saw. And as you say, if there had been, it would've come across my desk. Me being me."

Zita nodded. "In which case... this wasn't Glas or Smith either. None of the usual suspects." Zita made a show of playing this out in her head. "Okay, so, if this wasn't a professional hit, does that make it a personal one?"

"Maybe," 855 ventured. "Or maybe it's just somebody who doesn't want a paper trail. Working with a middle man can be dangerous in the killing business."

"Or a middle woman," Zita smirked.

855 tweaked the blade ever so slightly. A calculated move, Zita thought. 855 did not want them getting off-topic.

"You answer to Laura Tsung, yes?" Zita could tell it was a rhetorical question. "You go back and tell her she needs to look elsewhere for this."

Zita considered this, listening carefully to the rhythms of his speech. Every word indicated that he was telling the truth. "Then where should I be looking?"

And, suddenly, Zita realized she couldn't feel the knife anymore. Whirling around and stepping away, Zita crouched in a combat ready stance. But she was staring into an empty kitchen. Her pistol lay on the countertop. Its magazine and the round that had been in the chamber had been ejected.

Zita shook her head as she grabbed her weapon and slammed the magazine home. She hadn't even heard him remove it. When she reached the kitchen door, 855 whispered in her ear again...

"Nice watch. Dangerous to wear in this neighborhood."

She swung around, her weapon seeking a target, but 855 was nowhere in sight. 855 knew that one of an assassin's greatest tools was his ability to instill fear; and today, he had been at the top of his game.