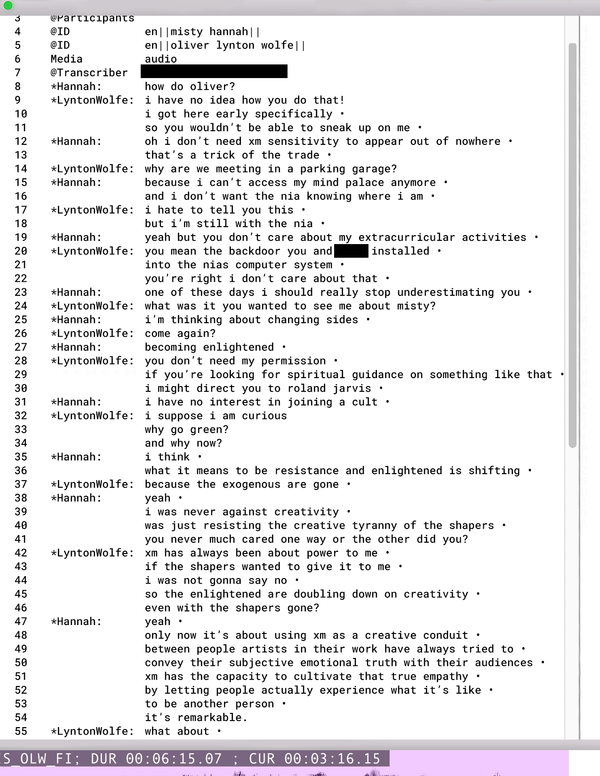 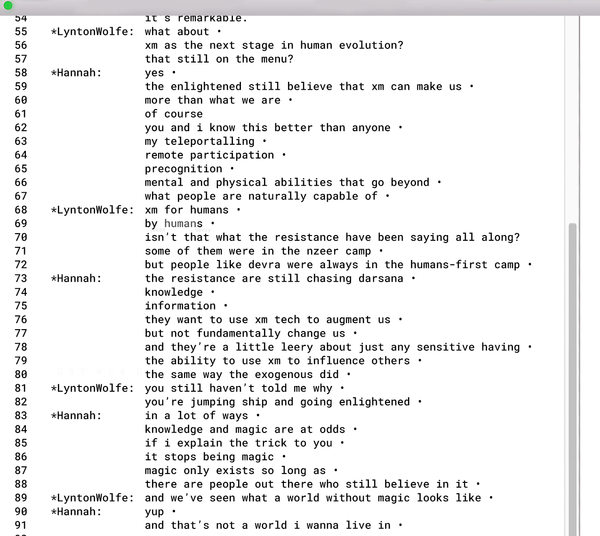 Incoming tips regarding a shift in alignments.

Would she be the first of a series to come?

Transcript
mistymeetsolw-p1
@Participants
@ID en||misty hannah||
@ID en||oliver lynton wolfe||
Media audio
@Transcriber *****(redacted)*****
*Hannah: how do oliver?
*LyntonWolfe: i have no idea how you do that!
i got here early specifically .
so you wouldn't be able to sneak up on me .
*Hannah: oh i don't need xm sensitivity to appear out of nowhere .
that's a trick of the trade .
*LyntonWolfe: why are we meeting in a parking garage?
*Hannah: because i can't access my mind palace anymore .
and i don't want the nia knowing where i am .
*LyntonWolfe: i hate to tell you this .
but i'm still with the nia .
*Hannah: yeah but you don't care about my extracurricular activities .
*LyntonWolfe: you mean the backdoor you and ***** installed .
into the nias computer system .
you're right i don't care about that .
*Hannah: one of these days i should really stop underestimating you .
*LyntonWolfe: what was it you wanted to see me about misty?
*Hannah: i'm thinking about changing sides .
*LyntonWolfe: come again?
*Hannah: becoming enlightened .
*LyntonWolfe: you don't need my permission .
if you're looking for spiritual guidance on something like that .
i might direct you to roland jarvis .
*Hannah: i have no interest in joining a cult .
*LyntonWolfe: i suppose i am curious
why go green?
and why now?
*Hannah: i think .
what it means to be resistance and enlightened is shifting .
*LyntonWolfe: because the exogenous are gone .
*Hannah: yeah .
i was never against creativity .
was just resisting the creative tyranny of the shapers .
you never much cared one way or the other did you?
*LyntonWolfe: xm has always been about power to me .
if the shapers wanted to give it to me .
i was not gonna say no .
so the enlightened are doubling down on creativity .
even with the shapers gone?
*Hannah: yeah .
only now it's about using xm as a creative conduit .
between people artists in their work have always tried to .
convey their subjective emotional truth with their audiences .
xm has the capacity to cultivate that true empathy .
by letting people actually experience what it's like .
to be another person .
it's remarkable.
*LyntonWolfe: what about .

mistymeetsolw-p2
it's remarkable.
*LyntonWolfe: what about .
xm as the next stage in human evolution?
that still on the menu?
*Hannah: yes .
the enlightened still believe that xm can make us .
more than what we are .
of course
you and i know this better than anyone .
my teleportalling .
remote participation .
precognition .
mental and physical abilities that go beyond .
what people are naturally capable of .
*LyntonWolfe: xm for humans .
by humans .
isn't that what the resistance have been saying all along?
some of them were in the nzeer camp .
but people like devra were always in the humans-first camp .
*Hannah: the resistance are still chasing darsana .
knowledge .
information .
they want to use xm tech to augment us .
but not fundamentally change us .
and they're little leery about just any sensitive having .
the ability to use xm to influence others .
the same way the exogenous did .
*LyntonWolfe: you still haven't told me why .
you're jumping ship and going enlightened .
*Hannah: in a lot of ways .
knowledge and magic are at odds .
if i explain the trick to you .
it stops being magic .
magic only exists so long as .
there are people out there who still believe in it .
*LyntonWolfe: and we've seen what a world without magic looks like .
*Hannah: yup .
and that's not a world i wanna live in .