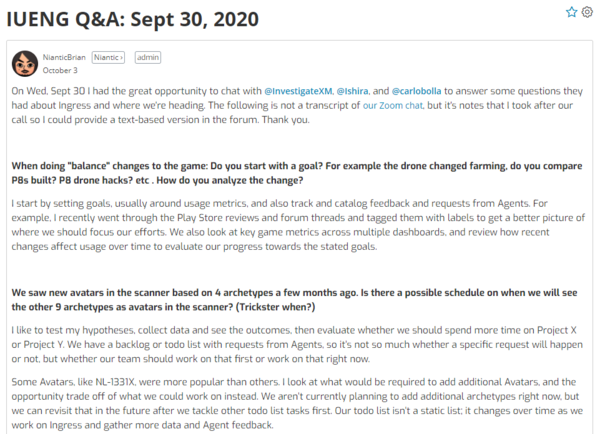 NianticBrian
2020/10/03 12:40(Forum)
IUENG Q&A: Sept 30, 2020
On Wed, Sept 30 I had the great opportunity to chat with @InvestigateXM, @Ishira, and @carlobolla to answer some questions they had about Ingress and where we're heading. The following is not a transcript of our Zoom chat, but it's notes that I took after our call so I could provide a text-based version in the forum. Thank you.

When doing "balance" changes to the game: Do you start with a goal? For example the drone changed farming, do you compare P8s built? P8 drone hacks? etc . How do you analyze the change?

I start by setting goals, usually around usage metrics, and also track and catalog feedback and requests from Agents. For example, I recently went through the Play Store reviews and forum threads and tagged them with labels to get a better picture of where we should focus our efforts. We also look at key game metrics across multiple dashboards, and review how recent changes affect usage over time to evaluate our progress towards the stated goals.

I like to test my hypotheses, collect data and see the outcomes, then evaluate whether we should spend more time on Project X or Project Y. We have a backlog or todo list with requests from Agents, so it's not so much whether a specific request will happen or not, but whether our team should work on that first or work on that right now.

Some Avatars, like NL-1331X, were more popular than others. I look at what would be required to add additional Avatars, and the opportunity trade off of what we could work on instead. We aren't currently planning to add additional archetypes right now, but we can revisit that in the future after we tackle other todo list tasks first. Our todo list isn't a static list; it changes over time as we work on Ingress and gather more data and Agent feedback.

Any way of getting passcodes in the future again? To give away to fellow faction agents etc or to attach to selfmade puzzles

I wanted our team to move from Mod Cards to the item Store so that we continue to follow guidelines set by the app stores. There are ways we could enable First Saturday hosts to award Ingress prizes or Agents to gift items to other Agents that don't circumvent app store platform fees that I'd like to explore further.

Will there be an official global leader board for all, the most or at least the medal stat entries? (Andrew said there was something unofficial and internal apparently)

I don't typically discuss features before they ship unless we're certain that a feature is coming soon, or we're looking for Agent feedback earlier in the development cycle. A leaderboard could drive a lot of Agent activity towards specific Agent Stats, but I don't have anything to share right now.

At the moment there is a big backlog with missions. Are there any problems at the moment?

Missions are being reviewed but there is an issue where they aren't being reviewed in the order received, as they should be. Our team is investigating and working on process improvements.

When recursion was introduced. We were told that there would be added benefits. For players who made the choice to recurse. Will recursed players ever see added benefit for recursion? PS. I love the recursion option. It keeps the game interesting.

We still need to address this. In the last year, I set some big goals around sustainability so that we can continue to grow the game. I also wanted to balance that with adding new features to Ingress, like Avatars, Portal Scanning, Apex, Dronenet, and Battle Beacons, to show Agents that we're committed to improving Ingress. I realize how important the Agent community is, especially veteran and Recursed Agents, and we'll make good on that promise to Recursed Agents.

Are you finding the Vanguard program to be useful?

Yes, they're champions of the user voice and fierce player advocates. They promptly escalate issues and feedback to our team, who also share updates with me.

Currently, Vanguards and Niantic teammates are the only Agents with access to pre-release or Beta versions. It would be helpful to invite more Agents to help us test the Beta versions of Ingress, which could help us identify issues earlier than we are today. For example, maybe this would be something Recursed Agents might be interested in.

Until before you went back to Niantic, what is your best memory of Ingress?

I have too many, and that's why I'm back working on Ingress. When I originally joined Niantic more than 8 years ago, it was to help connect people who share common interests, like geocaching or orienteering or ARGs, and then to help them connect locally. Finding someone who likes what I like isn't too hard, but finding someone who likes what I like and also lives in my neighborhood can be much harder. All of those stories from Agents about meeting their best friends, significant others, or finding their tribes -- that's why I came back.

I think we'll agree that Ingress has a very dedicated player base to last for what will soon be 8 years, but the number of players has definitely changed. As the original agents aged with the game, some have stated in my area (Connecticut) that their decision to no longer play is due to the introduction of Prime, Niantic giving more focus to Pokemon Go and other brand-famous AR games, and of course, life situations changing as we all age. What would your marketing strategy be to see the game stand out among other AR games, and maintain or increase its player base beyond Year 10?

Our Marketing Lead answered this one with her 2-prong approach:

Has the lockdown proved to be productive or just delayed things?

I don't want to understate the impact of COVID on Agents, on my team, or the game. We've had to make big pivots and postpone live events in 2020, but we're still working to add gameplay for Agents who can play outside safely, wearing masks and maintaining physical distance.

The drone has been a fun feature during the ongoing pandemic, thank you. Are there any plans to add to it, add medals or use it in virtual events?

We've discussed different ways to enable Agents to play from anywhere with Dronenet. I think it's important that Agents who physically travel to a Portal are able to do above and beyond what an Agent using a Drone is able to, which is why Drone Mark I is limited to hacking and Glyph hacks. We've been discussing what a Mark II or Mark III could potentially become, and if you have ideas please let us know in the forum.

What are the expectations for the game to return when the global pandemic ends? it would be interesting to launch a global event for all agents to participate together when things get back to normal.

I would very much like to host Anomalies when it's safe for us to do so. In the meantime, I do think there's a middle ground to bring back some types of events, for example something like the Nemesis Global Challenges, to encourage more Faction versus Faction competition in the nearer future.

It's two-fold where we should be more proactive and prompt with talking with Agents, and also we need to fix the issues Agents have highlighted so they know we're listening and acting on their feedback. I don't reply to each message I receive, but I read the forum, the subreddit, and have every Play Store review piped directly into my Inbox. Jumping in to First Saturday Zoom calls or hopping into an interview like this helps me with a 1:many approach, as opposed to a 1:1, as in I can answer a question once and hopefully a few Agents find it helpful.

What is your long term vision for ingress, year 3 to 5 down the road? Not asking about what features there will or will not be, but general state and vision.

Competitive, Faction versus Faction warfare held at a planetary scale. I want as many players as we can get to join the fold, which is why I also want the game to be approachable and accessible, but there's a specific kind of player that I think will really grok and love what Ingress will become. There are a lot of different ways to play Ingress and be a part of the Ingress community, but at its heart, I do want to amplify the exploration, exercise, and social components.

In the short term, after cataloging Agent bug reports from Play Store and the forum, I'm eager to get to work crossing them off the list. For example, COMM; animation feedback; Linking issues. I'd also like to return to something like the Global Challenges, but change them up so that there's a Faction winner declared at its conclusion.