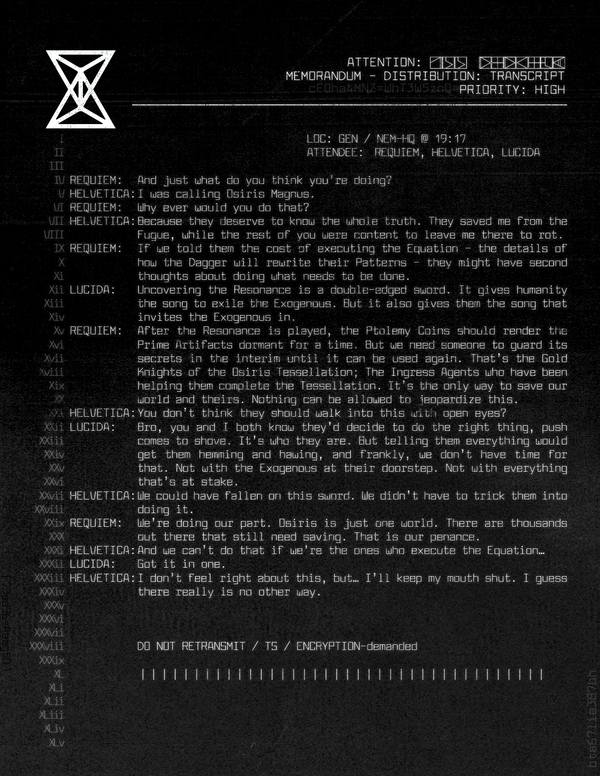 REQUIEM: And just what do you think you're doing?

HELVETICA: I was calling Osiris Magnus.

REQUIEM: Why ever would you do that?

HELVETICA: Because they deserve to know the whole truth. They saved me from the Fugue, while the rest of you were content to leave me there to rot.

REQUIEM: If we told them the cost of executing the Equation - the details of how the Dagger will rewrite their Patterns - they might have second thoughts about doing what needs to be done.

LUCIDA: Uncovering the Resonance is a double-edged sword. It gives humanity the song to exile the Exogenous. But it also gives them the song that invites the Exogenous in.

REQUIEM: After the Resonance is played, the Ptolemy Coins should render the Prime Artifacts dormant for a time. But we need someone to guard its secrets in the interim until it can be used again. That's the Gold Knights of the Osiris Tesselllation; The Ingress Agents who have been helping them complete the Tessellation. It's the only way to save our world and theirs. Nothing can be allowed to jeopardize this.

HELVETICA: You don't think they should walk into this with open eyes?

LUCIDA: Bro, you and I both know they'd decide to do the right thing, push comes to shove. It's who they are. But telling them everything would get them hemming and hawing, and frankly, we don't have time for that, Not with the Exogenous at their doorstep. Not with everything that's at stake.

HELVETICA: We could have fallen on this sword. We didn't have to trick them into doing it.

REQUIEM: We're doing our part. Osiris is just one world. There are thousands out there that still need saving. That is our penance.

HELVETICA: And we can't do that if we're the ones who execute the Equation...

LUCIDA: Got it in one.

HELVETICA: I don't feel right about this, but... I'll keep my mouth shut. I guess there really is no other way.