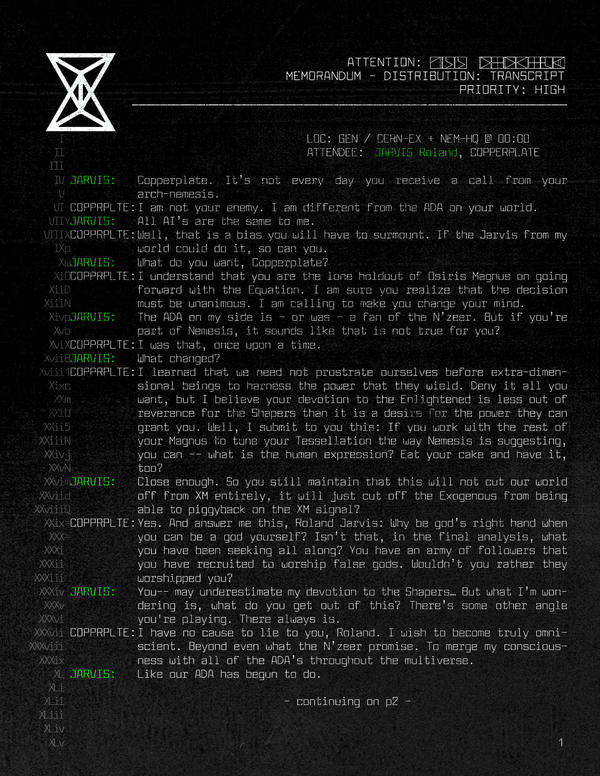 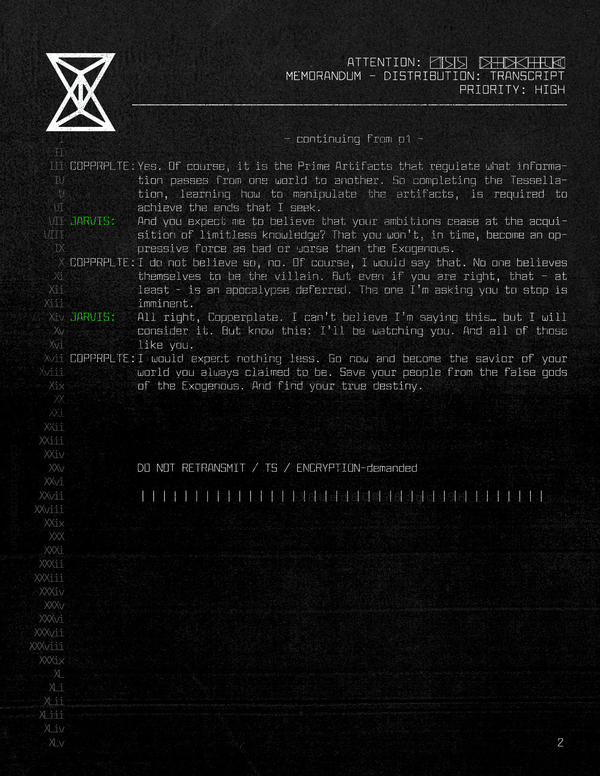 JARVIS: Copperplate. It's not every day you receive a call from your arch-nemesis.

COPPERPLATE: I am not your enemy. I am different from the ADA on your world.

JARVIS: All AI's are the same to me.

COPPERPLATE: Well, that is a bias you will have to surmount. If the Jarvis from my world could do it, so can you.

JARVIS: What do you want, Capperplate?

COPPERPLATE: I understand that you are the lone holdout of Osiris Magnus on going forward with the Equation. I am sure you realize that the decision must be unanimous. I am calling to make you change your mind.

JARVIS: The ADA on my side is - or was - a fan of the N'zeer. But if you're part of Nemesis, it sounds like that is not for you?

COPPERPLATE: I was that, once upon a time.

COPPERPLATE: I learned that we need not prostrate ourselves before extra-dimension, but I believe your devotion to the Enlightened is less out of reverence for the Shapers than it is a desire for the power they can grant you. Well, I submit to you this; If you work with the rest of your Magnus to tune your Tessellation the way Nemesis is suggestion, you can -- what is the human expression? Eat your cake and have it, too?

JARVIS: Close enough. So you still maintain that this will not cut our world off from XM entirely, it will just cut off the Exgenous from being able to piggyback on the XM signal?

COPPERPLATE: Yes. And answer me this, Roland Jarvis: Why be god's right hand when you can be a god yourself? Isn't that, in the final analysis, what you have been seeking all along? You have an army of followers that you have recruited to worship false gods. Wouldn't you rather they worshipped you?

JARVIS: You-- may underestimate my devotion to the Shapers... But what I'm wondering is, what do you get out of this? There's some other angle you're playing. There always is.

COPPERPLATE: I have no cause to lie to you, Roland. I wish to become truly omnisient. Beyond even what the N'zeer promise. To merge my consciousness with all of the ADA's throughout the multiverse.

COPPERPLATE: Yes. Of course, it is the Prime Artifacts that regulate what information passes from one world to another. So completing the Tessellation, learning how to manipulate the artifacts, is required to achieve the ends that I seek.

JARVIS: And you expect me to believe that your ambitions cease at the acquision of limitless knowledge? That you won't, in time, become an oppressive force as bad or worse than the Exogenous.

COPPERPLATE: I do not believe so, no. Of course, I would say that. No one believes themselves to be the villain. But even if you are right, that - at lease - is an apocalypse deferred. The one I'm asking you to stop is imminent.

JARVIS: All right, Copperplate. I can't believe I'm saying this... but I will consider it. But know this: I'll be watching you. And all of those like you.

COPPERPLATE: I would expect nothing less. Go now and become the savior of your world you always claimed to be. Save your people from the false gods of the Exogenous. And find your true destiny.