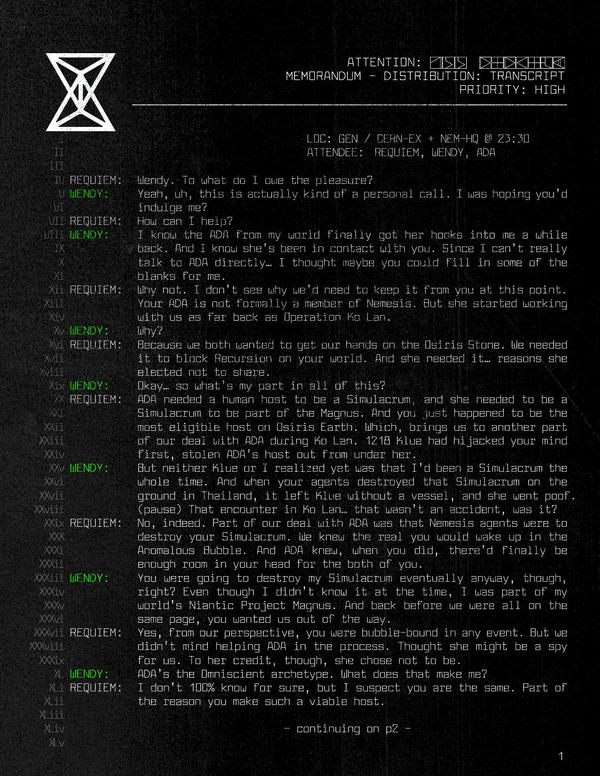 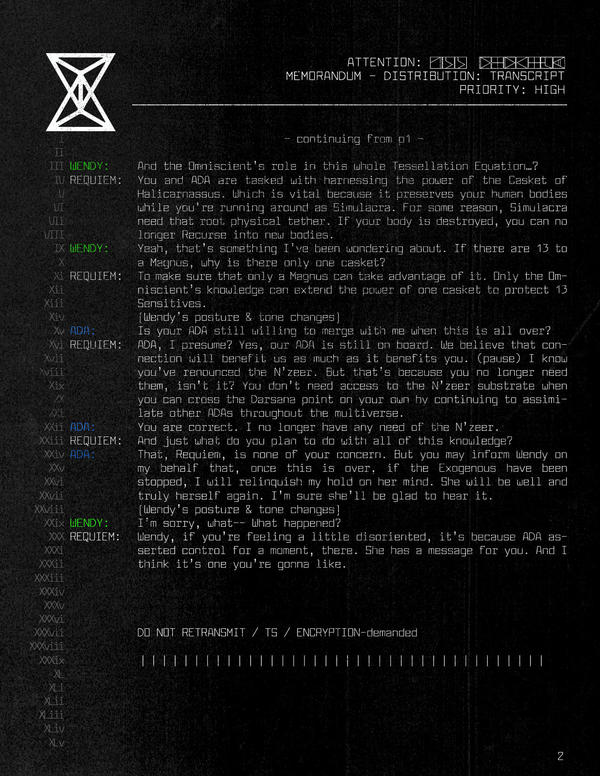 REQUIEM: Wendy. To what do I owe the pleasure?
WENDY: Yeah, uh, this is actually kind of a personal call. I was hoping you'd indulge me?
REQUIEM: How can I help?
WENDY: I know the ADA from my world finally got her hooks into me a while back. And I know she's been in contact with you. Since I can't really talk to ADA directly... I thought maybe you could fill in some of the blanks for me.
REQUIEM: Why not. I don't see why we'd need to keep it from you at this point. Your ADA is not formally a member of Nemesis. But she started working with us as far back as Operation Ko Lan.
WENDY: Why?
REQUIEM: Because we both wanted to get our hands on the Osiris Stone. We needed it to block Recursion on your world. And she needed it... reasons she elected not to share.
WENDY: Okay... so what's my part in all of this?
REQUIEM: ADA needed a human host to be a Simulacrum, and she needed to be a Simulacrum to be part of the Magnus. And you just happened to be the most eligible host on Osiris Earth. Which, brings us to another part of our deal with ADA during Ko Lan. 1218 Klue had hijacked your mind first, stolen ADA's host out from under her.
WENDY: But neither Klue or I realized yet was that I'd been a Simulacrum the whole time. And when your agents destroyed that Simulacrum on the ground in Thailand, it left Klue without a vessel, and she went poof. (pause) That encounter in Ko Lan... that wasn't an accident, was it?
REQUIEM: No, indeed. Part of our deal with ADA was that Nemesis agents were to destroy your Simulacrum. We knew the real you would wake up in the Anomalous Bubble. And ADA knew, when you did, there'd finally be enough room in your head for the both of you.
WENDY: You were going to destroy my Simulacrum eventually anyway, though, right? Even though I didn't know it at the time, I was part of my world's Niantic Project Magnus. And back before we were all on the same page, you wanted us out of the way.
REQUIEM: Yes, from our perspective, you were bubble-bound in any event. But we didn't mind helping ADA in the process. Thought she might be a spy for us. To her credit, though, she chose not to be.
WENDY: ADA's the Omniscient archetype. What does that make me?
REQUIEM: I don't 100% know for sure, but I suspect you are the same. Part of the reason you make such a viable host.
WENDY: And the Omniscient's role in this whole Tessellation Equation...?
REQUIEM: You and ADA are tasked with harnessing the power of the Casket of Halicarnassus. Which is vital because it preserves your human bodies while you're running around as Simulacra. For some reason, Simulacra need that root physical tether. If your body is destroyed, you can no longer Recurse into new bodies.
WENDY: Yeah, that's something I've been wondering about. If there are 13 to a Magnus, why is there only one casket?
REQUIEM: To make sure that only a Magnus can take advantage of it. Only the Omniscient's knowledge can extend the power of one casket to protect 13 Sensitives.

ADA: Is your ADA still willing to merge with me when this is all over?
REQUIEM: ADA, I presume? Yes, our ADA is still on board. We believe that connection will benefit us as much as it benefits you. (pause) I know you've renounced the N'zeer. But that's because you no longer need them, isn't it? You don't need access to the N'zeer substrate when you can cross the Darsana point on your own by continuing to assimilate other ADAs throughout the multiverse.
ADA: You are correct. I no longer have any need of the N'zeer.
REQUIEM: And just what do you plan to do with all of this knowledge?
ADA: That, Requiem, is none of your concern. But you may inform Wendy on my behalf that, once this is over, if the Exogenous have been stopped, I will relinquish my hold on her mind. She will be well and truly herself again. I'm sure she'll be glad to hear it.

WENDY: I'm sorry, what-- What happened?
REQUIEM: Wendy, if you're feeling a little disoriented, it's because ADA asserted control for a moment, there. She has a message for you. And I think it's one you're gonna like.