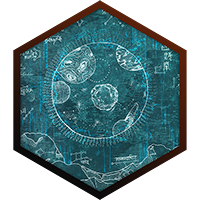 The Tessellation is a global media hunt that started in November 2019. It involves Ingress lore study, speed, community coordination, and decoding. Currently, we've transitioned from live Portal hacking to virtual hunting with passcode redemption & Intel map exploration. Visit here if you want to read more about the rules. We recommend going through the rest of this FAQ list before diving into the full rules.

02. I'm very new to this. How can I participate in the Tessellation?

Here are some Agent-driven resources all over the world that will get you up to speed faster. We also recommend reaching out to members from your Faction.

A Tessera (plural Tesserae) is a hexagonal media object released by a mysterious entity called the Tethered Hand. They could be obtained through Portal hacks, won at Live-Drop operations, or redeemed through passcodes via the Scanner or Intel Map. At this time, all Tesserae are acquired through passcode redemption.

04. I am a solo player. Can I still participate?

Yes. The Tessellation is a game of community collaboration, but there are ways to contribute through solo play. The Global Tessera Drops are posted in an announcement in this Forum section in the form of a pdf. The pdf contains a list of passcodes that will give you a Tessera media. Take a screenshot of the media and upload it to the appropriate thread (the one you found the original pdf in) along with your Faction (e.g ENL or RES), and you are eligible for a Knight Medal. Make sure you don't edit your comment or else it will be disregarded.

The Target Tesserae are harder, but not impossible, to retrieve when you are solo because they often require decoding and group research. Feel free to challenge yourself. If you're great at it, your Faction would for sure like your help, too.

05. How can an Agent who has trouble accessing the Community Forums participate?

If you are unable to log in to the Community Forums, please reach out to the Support team with a screenshot of the error message.

06. The 13-Archetype Decode Challenge also offers hexagonal media as reward. Do they count?

No, these are not considered Tesserae media objects. Only the hexagonal media objects deployed by the Tethered Hand are Tesserae.

07. When are the Tesserae available for hunting?

The timing of their appearance will be announced in this section of the Forum.

08. I found some Tesserae in my inventory, can I still submit them in order to get the Knight Medal?

Unfortunately they will not count towards your achievements anymore. Threads of previous Rounds will be closed when a new Round has started. There will be more to come. Focus on retrieving the new Tesserae!

09. How do I know if I qualify for the Paragon Medal?

Here is a checklist to help you determine if you've fulfilled any one of the following:

The Tracker is an avid follower of breadcrumbs who uncovers connections between gaming and story. They demonstrated their understanding of the Tessellation Directives through at least 2 forum posts, and/or helped Agents new to the investigation.

11. I posted a Tessera screenshot in the wrong thread. Does that count?

Unfortunately, it does not. Only Tesserae posted in the appropriate thread will count. The thread and the Tesserae would be named similarly.

12. How does the NIA know that I qualify for the Paragon Medal?

The NIA keeps track of your contributions that are documented in the forum, such as the First Discoverer, Discoverer, and Tracker. The Vanguards will be assisting us in getting info on the Live-drop attendees, decoders, coordinators, and liaisons. To prevent flooding their data-gathering process and hence missing info, we recommend that Agents wait for the Vanguards to reach out to them or their Faction's Tessellation coordinators. The NIA will then announce the Tessellation Hall of Fame after completing the Tessellation. Check if your Agent name is logged on the list and correctly so. If not, then reach out to @Truthseeker or your Faction Vanguards.

13. Will either of the Tessellation Medals be placed in the Anomaly row, given their relation to the Nemesis sequence and close connection to the Anomalies?

The Tessellation Medals will be placed among non-Anomaly medals and sorted by date.

14. What if I changed Faction midway through the Tessellation, which Knight Medal do I get?

You would get the Medal of the Faction you were when you participated. If you participated before and after your Faction change, then you will get the tier of Knight Medal for your current Faction.

In that case both Factions get awarded the Gold Knight Medal.

16. What if I changed my Ingress name since first registering with the forums?

There will be a dedicated thread in the Tessellation forum section for you to report this. You will have to link the original comment where you contributed screenshots. We will then process the verification.

There will be a dedicated thread in the Tessellation forum section for this. You will have one week to express your desire to opt out of the Medals after we have posted the Hall of Fame. The date for publishing the Hall of Fame will be announced after the Tessellation has concluded. If you are qualified for receiving both Medals, you can only opt out of both, and not one or the other.

18. I received the Medal but was too late to opt out. Can I have it removed?

No, if you choose to opt out, you must opt out of the Medals before the deadline. Medals will not be removed from Agent profiles at this time.