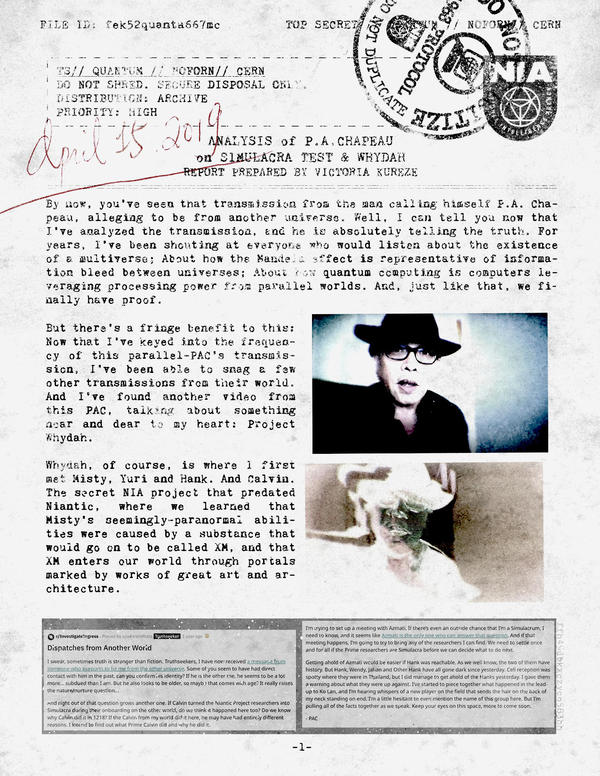 NIA
DO NOT DIGITIZE
1968 PROTOCOL
APPROVED DO NOT DUPLICATE

By now, you've seen that transmission from the man calling himself P.A. Chapeau, analyzed the transmission, and he is absolutely telling the truth. For yeears, I've been shouting at everyone who would listen about the existence of a multiverse; About how the Mandela effect is representative of information bleed between universes; About how quantum computing is computers leveraging processing power from parallel worlds. And, just like that, we finally have proof.

But there's a fringe benefit to this: Now that I've keyed into the frequency of this parallel-PAC's transmission, I've able to snag & few other transmissions from their world. And I've found another video from this PAC, talking about something near and dear to my heart: Project Whydah.

Whydah, of course, is where I firsit met Mysty, Yuri and Hank. And Calvin. The secret NIA project that predated Niantic, where we learned that Misty's seemingly-paranormal abilities were caused by a substance that would go on to be called XM, and that XM enters our world through portals marked by works of great art and architecture.

Dispatches from Another World
I swear, sometimes truth is stranger than fiction. Truthseekers, I have now received a message from someone who purports to be me from the other universe. Some of you seem to have had direct contact with him in the past, can you confirm his identity? If he is the other me, he seems to be a lot more... subdued than I am. But he also looks to be older, so maybe that comes with age? It really raises the nature/nurture question...

And right out of that question grows another one. If Calvin turned the Niantic Project researchers into Simulacra during their onboarding on the other world, do we think it happened here too? Do we know why Calvin did it in 1218? If the Calvin from my world did it here, he may have had entirely different reasons. I intend to find out what Prime Calvin did and why he did it.

I'm trying to set up a meeting with Azmati. If there's even an outside chance that I'm a Simulacrum, I need to know, and it seems like Azmati is the only one who can answer that question. And if that meeting happens, I'm going to try to bring any of the researchers I can find. We need to settle once and for all if the Prime researchers are Simulacra before we can decide what to do next.

Getting ahold of Azmati would be easier if Hank was reachable. As we well know, the two of them have history. But Hank, Wendy, Jahan and Other Hank have all gone dark since yesterday. Cell reception was spotty where they were in Thailand, but I did manage to get ahold of the Hanks yesterday. I gave them a warning about what they were up against. I've started to piece together what happened in the lead-up to Ko Lan, and I'm hearing whispers of a new player on the field that sends the hair on the back of my neck standing on end. I'm a little hesitant to even mention the name of this group here. But I'm pulling all of the facts together as we speak. Keep your eyes on this space, more to come soon.

[IMAGE]
.External view of the facility in 1218 universe.

Project Whydah, on our world, happened in 2016. But in this video from the other world, timestamped 2013. Whydah was already shut down - and, from the looks of thing, it had been for some time. It appears that this 1218 universe is ahead of ours to some degree, at least when it comes to XM research. It's trippy to watch; the Whydah building in our world was identical to theirs.. but they did their experiment there years before. I wonder if my counterpart on their world was part of Whydah there? I actually kind of want to talk to the other me. I'd like to pick her brain about some things.

But, okay, now on to the fun part: How I was able to pull these dispatches from another universe out of the world, so to speak. Well, for starters the