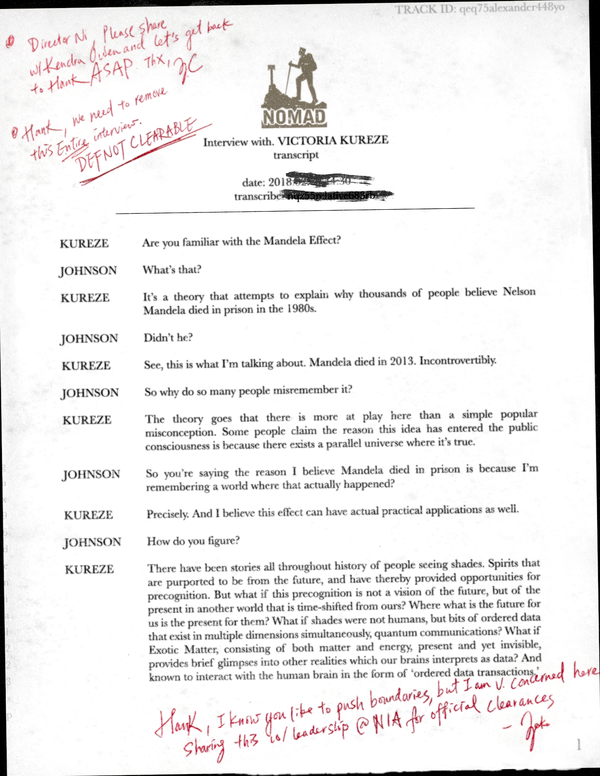 What is the Mandela Effect
Transcript
TRACK ID: qeq75alexander448yo

◎Hank, we need to remake
this =Entire= interviews.
_DEFNOT CLEARABLE_

KUREZE Are you familiar with the Mandela Effect?

KUREZE It's a theory that attempts to explain why thousands of people believe Nelson Mandela died in prison in the 1980s.

KUREZE See, this is what I'm talking about. Mandela died in 2013. Incontrovertibly.

JOHNSON So why do so many people misremember it?

KUREZE The theory goes that there is more at play here than a simple popular misconception. Some people claim the reason this idea has entered the public consciousness is because there exists a parallel universe where it's true.

JOHNSON So you're saying the reason I believe Mandela died in prison is because I'm remembering a world where that actually happened?

KUREZE Precisely. And I believe this effect can have actual practical applications as well.

JOHNSON How do you figure?

KUREZE There have been stories all throughout history of people seeing shades. Spirits that are purported to be from the future, and have thereby provided opportunities for precognition. But what if this precognition is not a vision of the future, but of the present in another world that is time-shifted from ours? Where what is the future for us is the present for them? What if shades were not humans, but bits of ordered data that exist in multiple dimensions simultaneously, quantum communications? What if Exotic Matter, consisting of both matter and energy, present and yet invisible, provides brief glimpses into other realities which our brains interprets as data? And known to interact with the human brain in the form of 'ordered data transactions.'

(handwriting)
Hank, I know you like to push boundaries, but I am V. concerned here
sharing this co/leadership @NIA for official clearances
-Zeke