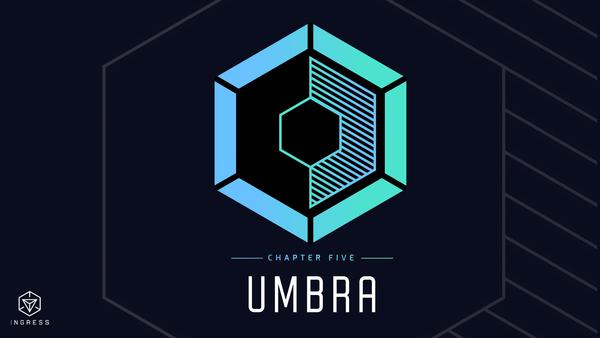 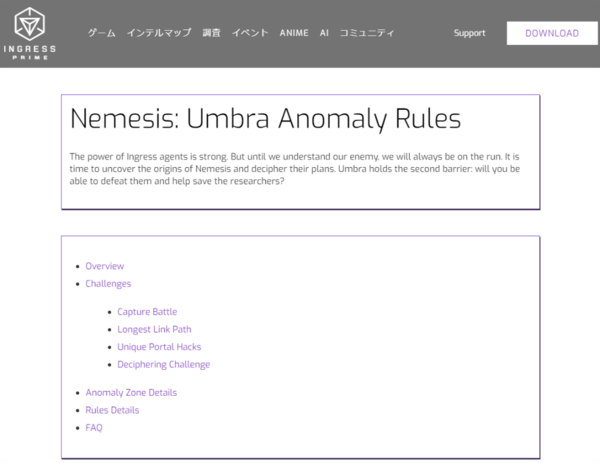 Ingress
2019/09/28 04:21(Twitter)
Agents, the Umbra Anomaly rules and Anomaly Zone maps have been released. To view all the details, click here:

Nemesis: Umbra Anomaly Rules
The power of Ingress agents is strong. But until we understand our enemy, we will always be on the run. It is time to uncover the origins of Nemesis and decipher their plans. Umbra holds the second barrier: will you be able to defeat them and help save the researchers?

Overview
In the Nemesis: Umbra Ingress Anomalies, Agents will be striving to defeat the Nemesis villain named Umbra. Umbra holds one of the key pieces that is keeping the Niantic researchers trapped, and is attempting to take permanent hold in our dimension. In the fight against Umbra, both Factions are trying to gain crucial information that could give them a Key Advantage in the final battle against Nemesis. The strongest Faction will reap the greatest rewards and be given first selection of advantages from the NIA.

During a three-hour period in each city (2:30PM to 5:30PM local time), an Anomaly Zone will form around certain XM Portals. These Portals will be visibly ornamented in the scanner. Ingress Agents will be competing in four challenges:

Challenges
Capture Battle
Umbra is trying to gain hold via neutral portals in the Anomaly Zone; agents must capture and keep them. Capturing and holding these portals for your Faction will keep Umbra's barrier vulnerable.

Longest Link Path
Agents must make a long path of links starting from one of their Faction's Base Portals. Long link paths can destabilize Umbra's barrier, and get us one step closer to re-establishing the connection between the Niantic Project Researchers and our world.

Unique Portal Hacks
Agents must hack as many different portals in the Anomaly Zone as they can. Hacking the portals casts the net to capture Umbra.

Deciphering Challenge
Umbra's true name is hidden behind layers of shadow and mystery. While the anomaly battle will prevent her plans from coming to fruition, in order to truly defeat her, the agents must uncover her true identity. Agents must decode enciphered passcodes and enter them into the scanner in order to identify information about Umbra.

Anomaly Zone Details
During the Anomaly Period, Anomaly Zone Portals will be ornamented in the scanner as follows:

The point total for each site is 100 scoring points. It will be split as follows:

The Faction which claims the most scoring points is the victor for that site.

Benefits of Victory
The Faction winning more cities in the Umbra series of Ingress Anomalies will gain first choice of an Umbra Key Advantage, usable in the Nemesis Sequence Finale in 2020 (the other faction will get second choice).


The final raw score for each Faction will be its maximum score from any of the Capture Battle measurements during the Anomaly Period. 35 scoring points will be distributed proportionally between the Factions, depending on their final raw score.

In other words, the link originating from the Base Portal will have its link distance measured in kilometers. Each additional link will have a higher multiplier applied to its length. If a Link Path is comprised of three links with the distances of 100km, 25km, and 50km, the score for the Link Path would be (100x1)+(25x2)+(50x3) = 300 points.

The final raw score for each Faction will be its maximum score from any of the Longest Link Path measurements during the Anomaly Period. 40 scoring points will be distributed proportionally between the Factions, depending on their final raw score.

Details: During the three-hour Anomaly Period, each registered Onsite Agent will have the number of unique Anomaly Zone Portals they hacked counted. Any Portal with an Ornament is valid for the Unique Portal Hacks competition. Only hacks during the Anomaly Period will be counted. A Portal hack does not need to count towards an Agent's Explorer Badge in order to count for the Unique Portal Hacks competition.Measurements: There will be one measurement, at the end of the Anomaly Period. This measurement has a measurement window of 2 minutes (records may be taken up to 1 minute before or after the measurement time). Each Agent's hacks over the Anomaly Period will then be counted and the Faction's score computed. Only registered Onsite Agents will be counted towards the final score.Site Scoring: The final raw score for each Faction will be the average from all of its Agents, after removing any with fewer than thirteen Portal hacks and then removing the highest and lowest 15% of Agent scores. The Faction with the higher final raw score will win the entire competition, gaining the full 15 scoring points.

Details: At the beginning of the three-hour Anomaly Period, each registered Onsite and Offsite Agent for that city will be sent an email with links to a number of miniciphers specific to their city. Each of these miniciphers is an encoded message which can be deciphered to a passcode (one use per agent, resulting in a media object). When a registered Agent for that city (either Onsite or Offsite) enters one of these passcodes, it will be counted for their Faction. Once a Faction has entered enough minicipher passcodes to reach the Critical Level for their city (at least 75% of the miniciphers for their city), their Faction members will receive an email with the Master Code for their site. When deciphered, this will also result in a passcode. Emails will be sent from "Niantic <niantic@info.ingress.com>".Measurements: Faction progress on the minicodes will be checked every five minutes during the Anomaly Period (with a two minute measurement window, up to one minute before or after). If a Faction has reached the Critical Level, they will be emailed the Master Code at that time.Site Scoring: The Faction which first reaches the Critical Level and enters the Master Code solution will win the entire competition, gaining the full 10 scoring points.

During the two hours before the start of the Anomaly Period (12:30PM to 2:30PM local time), Anomaly Zone Portals may be spontaneously neutralized. This is likely to happen multiple times leading up to the start of the Anomaly Period. This will not affect inoculation times.During the Anomaly Period, fields and links using Portals outside the Anomaly Zone and crossing into the Anomaly Zone may spontaneously de-materialize when detected. This includes fields which cover a large part of the Anomaly Zone, even if they do not cover the entire Anomaly Zone.
FAQ
Capture Battle
Q: Will agents with an Onsite ticket need to make 13 hacks before their captures will be counted for score?
A: No.
Q: How will portals affected by a Jarvis Virus or ADA Refactor be counted?
A: Portals owned by Jarvis or ADA will not be counted.
Longest Link Path
Q: Will agents with an Onsite ticket need to make 13 hacks before their links will be counted for score?
A: No.
Q: If we control a base portal from the other faction and link from it, will it count for our Faction or the other Faction?
A: It will not count for either Faction. Note that this is unlike Shard Battle, where Faction control is ignored.
Q: Can an opposite Faction's Base Portal be part of a longest link path?
A: Yes -- all Base Portals are ornamented anomaly zone portals, so an opposite Faction's Base Portal may be part of a Link Path if your Faction controls it. However, the Link Path must start from one of your Faction's Base Portals.
Q: Does the direction of the links make any difference?
A: No.
Q: In the situation on this image, what would be considered as longest link path? 0 links, because it has a loop, 4 links starting at yellow pin and ending at red circle, or all 7 links?A: 6 links: the final link back to the red circled portal would create a loop, so would not be counted. The higher-scoring path of 6 links (i.e., the longer one) will be used.
Q: In the following situation (with links in red), are the following green paths of links all valid for consideration?
A: Yes, those are all valid link paths.

Deciphering Challenge
Q: What happens if neither Faction deciphers the Master Code during the Anomaly Period?
A: In this case, neither Faction will receive any scoring points for the Deciphering Challenge.
Q: What happens if a Faction enters the Master Code solution before reaching the Critical Level?
A: A Faction must have reached the Critical Level (by entering minicipher solutions) in order for the Master Code solution to be scored.
Q: Is there any benefit to multiple members of a Faction inputting a minicipher solution?
A: No. The Critical Level counts whether each minicipher has been solved, and does not care how many members of a Faction have solved it.
Q: Can a single Agent solve and enter multiple passcodes?
A: Yes.
Q: Can a single minicode be solved by both Factions?
A: Yes.
Q: What happens if an Agent who is not registered for the site enters a minicode solution?
A: It will not be counted, and it will not prevent another registered Agent from entering the solution.