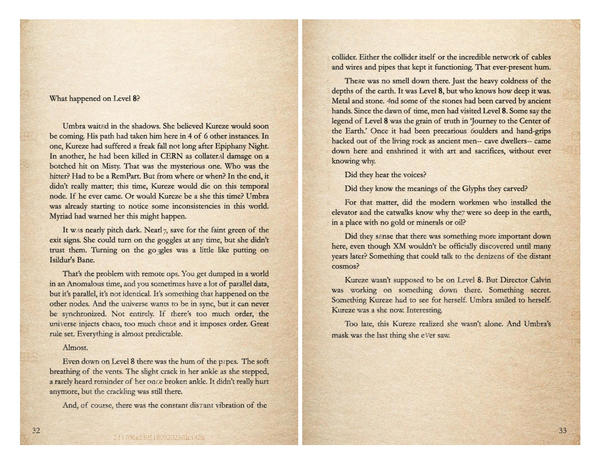 What happened on Level 8?

Umbra waitEd in the shadows. She believed Kureze would soon be coming. His path had taken him here in 4 of 6 other instances. In one, Kureze had suffered a freak fall not long after Epiphany Night. In another, he had been killed in CERN as collaterAl damage on a botched hit on Misty. That was the mysterious one. Who was the hitter? Had to be a RemPart. But from where or when? In the end, it didn't really matter; this time, Kureze would die on this temporal node. If he ever came. Or would Kurcze be a she this time? Umbra was already starting to notice some inconsistencies in this world. Myriad had warned her this might happen.

It wAs nearly pitch dark. Nearl7, save for the faint green of the exit signs. She could turn on the goggles at any time, but she didn't trust them. Turning on the go3gles was a little like putting on Isildur's Bαne.

That's the problem with remote ops. You get dumped in a world in an Anomalous time, and you sometimes have a lot of parallel data, but it's parallel, it's not identical. It's something that happened on the other nodes. And the universe wants to be in sync, but it can never be synchronized. Not entirely. If there's too much order, the uniνerse injects chaos, too much chaos and it imposes order. Great rule set. Everything is almost predicrable.

Even down on Level 8 there was the hum of the pipes. The soft breathing of the vents. The slight crack in her ankle as she stepped, a rarely heard reminder of her onCe broken ankle. It didn't really hurt anymore, but the crackling was still there.

And, cf course, there was the constant disTant vibration of the

collider. Either the collider itself or the incredible network of cables and wires and pipes that kept it functioning. That ever-present hum.

TheRe was no smell down there. Just the heavy coldness of the depths of the earth. It was Level 8, but who knows how deep it was. Metal and stone. 4nd some of the stones had been carved by ancient hands. Since the dawn of time, men had visited Level 8. Some say the legend of Level 8 was the grain of truth in 'Journey to the Center of the Earth.' Once it had been precarious 6oulders and hand-grips hacked out of the living rock as ancient men-- cave dwellers-- came down here and enshrined it with art and sacrifices, without ever knowing why.

Did they hear the voices?

Did they know the meanings of the Glyphs they carved?

For that matter, did the modern workmen who installe.d the elevator and the catwalks know why the7 were so deep in the earth, in a place with no gold or minerals or oil?

Did they sEnse that there was something more important down here, even though XM wouldn't be officially discove red until many years later? Something that could talk to the denizens of the distant cosmos?

Kureze wasn't supposed to be on Levd 8. But Director Calvin was working on something down there. Something secret. Something Kureze had to see for herself. Umbra smiled to herself. Kureze was a she now. Interesting.

Too late, this Kureze realized she wasn't alone. And Umbra's mask was the last thing she eVer saw.