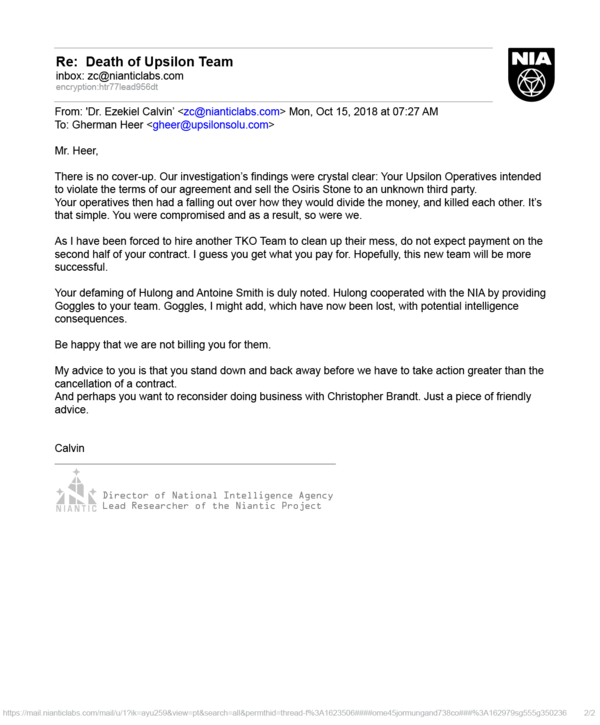 wearerofhats
2019/05/06 15:56:19(Reddit)
Calvin Fires Back
2019/05/06 17:00:11(Reddit)
I think the original team killed each other six months ago before they could retrieve the stone, but the agents that were just sent in for Operation Ko Lan may have succeeded where the Upsilon team failed. I think the issue is, the agents are Sensitives, and the Upsilon team were not. But everyone's been dark since Ko Lan, so I don't actually know how it turned out yet...

There is no cover-up. Our investigation's findings were crystal clear: Your Upsilon Operatives intended to violate the terms of our agreement and sell the Osiris Stone to an unknown third party.
Your operatives then had a falling out over how they would divide the money, and killed each other. It's that simple. You were compromised and as a result, so were we.

As I have been forced to hire another TKO Team to clean up their mess, do not expect payment on the second half of your contract. I guess you get what you pay for. Hopefully, this new team will be more successful.

Your defaming of Hulong and Antoine Smith is duly noted. Hulong cooperated with the NIA by providing Goggles to your team. Goggles, I might add, which have now been lost, with potential intelligence consequences.

Be happy that we are not billing you for them.
My advice to you is that you stand down and back away before we have to take action greater than the cancellation of a contract.

And perhaps you want to reconsider doing business with Christopher Brandt. Just a piece of friendly advice.