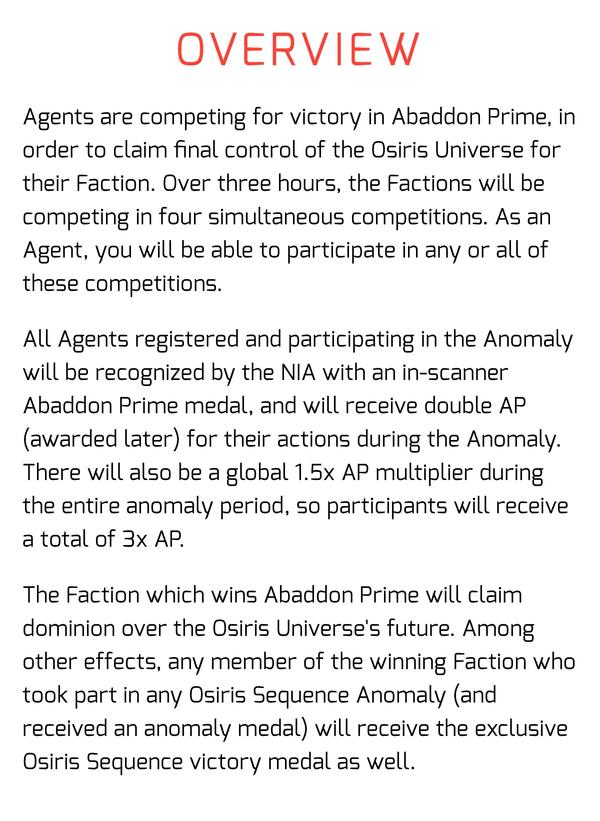 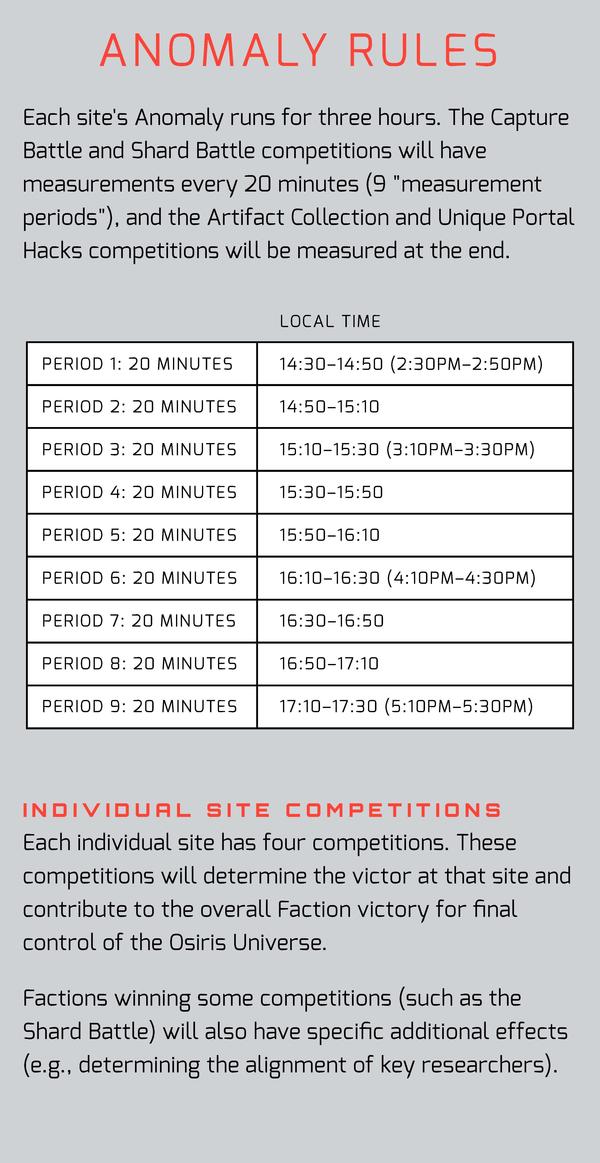 OVERVIEW
Agents are competing for victory in Abaddon Prime, in order to claim ﬁnal control of the Osiris Universe for their Faction. Over three hours, the Factions will be competing in four simultaneous competitions. As an Agent, you will be able to participate in any or all of these ompetitions.

All Agents registered and participating in the Anomaly will be ecognized by the NIA with an in-scanner Abaddon Prime medal, and will receive double AP (awarded later) for their actions during the Anomaly. There will also be a global 1.5x AP multiplier during the entire anomaly period, so participants will receive a total of 3x AP.

The Faction which wins Abaddon Prime will claim dominion over the Osiris Universe's future. Among other effects, any member of the winning Faction who took part in any Osiris Sequence Anomaly (and
received an anomaly medal) will receive the exclusive Osiris Sequence victory medal as well.

OSIRIS UNIVERSE KEY ADVANTAGES
Over the course of the year, Agents have been competing in XM Anomalies to gain key advantages for this ﬁnal battle.

CARRIE CAMPBELL'S JOURNAL (ENLIGHTENED):
Carrie's Journal is ﬁlled with glyphs and intelligence for the future. Carrie will help interpret these glyphs for one chosen anomaly site, resulting in foreknowledge of one measurement period at that
site, identifying all of one type of ornamented portals (shard research portals, volatile portals, or artifact portals) for that measurement period at that site.

HANK JOHNSON (RESISTANCE):
Hank Johnson embodies the Explorer. Agents will be able to choose one anomaly site for Hank to come to, and guide his travel through the city. At that site, Hank will help uncover otherwise-unknown Artifacts: wherever he goes, around him, portals that would not otherwise release Artifacts will temporarily drop Artifacts (despite not being ornamented as Artifact Portals).

DARSANA LENSES (ONE ENLIGHTENED, ONE RESISTANCE):
The Darsana Lenses are each one-time use visions of future neutralized portals: they can be activated once (over the course of the entire anomaly series) in order to neutralize (in a cascading basis) all the enemy faction portals at one Anomaly site. This may take several minutes until its effects subside. It should be noted, some researchers believe that XM concentration at extremely contested portals may be sufﬁcient to deﬂect the effect of the lens.

OSIRIS STONE (IN COMPETI TION):
Unknown. It may actually be the key to opening a path to a new universe, rather than affecting control of this one...

As Faction leaders choose how to use these advantages, their choices will be recorded in the Abaddon Prime Rules FAQ.

ANOMALY RULES
Each site's Anomaly runs for three hours. The Capture Battle and Shard Battle competitions will have measurements every 20 minutes (9 "measurement periods"), and the Artifact Collection and Unique Portal Hacks competitions will be measured at the end.

INDIVIDUAL SITE COMPETITONS
Each individual site has four competitions. These competitions will determine the victor at that site and contribute to the overall Faction victory for ﬁnal control of the Osiris Universe.

Factions winning some competitions (such as the Shard Battle) will also have speciﬁc additional effects (e.g., determining the alignment of key researchers).

CAPTURE BATTLE
Agents are trying to capture Anomaly Zone portals and control them. The more portals, the higher the Faction score.

SITE SCORING: At each Capture Battle measurement, a Faction's score will be 3 points for each Volatile Portal they control, plus 1 point for each other Anomaly Zone Portal they control. The ﬁnal raw score for each Faction will be its maximum score from any of the Capture Battle measurements during the Anomaly Period. 100 scoring points will be distributed between the Factions, proportional to their ﬁnal raw score.

ORNAMENTS: Portals for the Capture Battle competition will be ornamented as follows:

SHARD BATTLE
Agents are trying to make links to bring Shards to their Faction's Research Portals. The more Shards claimed, the higher the Faction score.

Shards will jump along existing Portal Links from their current Portal, if the linked portals are Portals L4 or higher (both the current portal and linked portal must be L4 or higher). At the end of each measurement period, Shards are expected to dematerialize (and may immediately rematerialize at another Anomaly Zone Portal). Research Portals are expected to change at the start of each measurement period.

The ﬁnal raw score for each Faction will be its maximum score from any of the Shard Battle measurements during the Anomaly Period. 100 scoring points will be distributed between the Factions, proportional to their ﬁnal raw score.

ORNAMENTS: Portals for the Shard Battle competition will be ornamented as follows:

ADDITIONAL OUTCOMES: The Faction which wins the Shard Battle competition at each city will have reassembled the essence of one of the key Niantic researchers, and will align their loyalty to their Faction. The predicted associated researchers are:

ARTIFACT COLLECTION
Agents are trying to collect Artifact media items, hacking them out of ornamented Artifact Portals and trading them to collect full Sets.
The more Artifacts and Sets, the higher the Faction score.

DETAILS: Various portals in the anomaly zone will brieﬂy become active Artifact Portals and drop Artifact media items; while active, they will be ornamented as below. This period may be as short as a few minutes. Each Artifact belongs to a Set of Artifacts. There will be multiple Sets and multiple copies of each Set. For example, one Set might include Alpha, Beta, Gamma, Delta, and Omega Artifacts; and another might include Orange Triangle, Orange Square, Orange Pentagon, and Orange Hexagon Artifacts. Which Portals drop artifacts will change, and what Artifacts they drop will also change.

MEASUREMENTS: There will be one measurement, at the end of the Anomaly Period. At this time, Artifacts will begin being tracked for Agents. This can take up to an hour for any individual Agent, so Agents should make sure to keep their Artifacts in inventory for up to an hour after the Anomaly Period. Only Artifacts directly in Agents' inventories will be counted (Artifacts in capsules will not be counted). Only registered and checked-in Agents will be counted.

SITE SCORING: Only registered and checked-in Agents will be counted. Each Agent's score will be 1 point for each different Artifact they hold, plus 10 points for each different complete Artifact Set. If an Agent has multiple copies of an Artifact, or multiple copies of an Artifact Set, it will only count once. The Faction's ﬁnal raw score will be the average of all their Agents' scores. 100 scoring points will be distributed between the Factions, proportional to their ﬁnal raw score.

ORNAMENTS: Portals for the Artifact Collection competition will be ornamented as follows:

UNIQUE PORTAL HACKS
Agents are trying to hack many different Portals in the Anomaly Zone. The more portals hacked, the higher the Faction score.

DETAILS: During the Anomaly Period, each registered and checked-in Agent will have the number of unique Anomaly Zone Portals they hacked counted. A Portal will be counted even if the Agent had already hacked that Portal before the Anomaly Period.

SITE SCORING: The ﬁnal raw score for each Faction will be the average from all of its Agents, after the highest and lowest 15% of Agent scores have been removed. The Faction with the higher ﬁnal raw score will win the entire competition, gaining the full 65 scoring points.

ORNAMENTS: Any ornamented portal is valid for the Unique Portal Hacks competition.

The Faction which claims more scoring points is the victor for that site.

GLOBAL COMPETITION
There is no global competition element for this anomaly series.