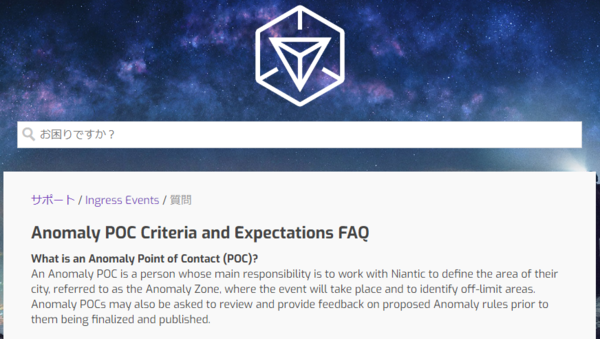 What is an Anomaly Point of Contact (POC)?
An Anomaly POC is a person whose main responsibility is to work with Niantic to define the area of their city, referred to as the Anomaly Zone, where the event will take place and to identify off-limit areas. Anomaly POCs may also be asked to review and provide feedback on proposed Anomaly rules prior to them being finalized and published.
Who is eligible to be an Anomaly POC?
Any player whose account is in good standing is eligible to be nominated as an Anomaly POC.
What does "good standing" mean?
All nominated POCs have to pass an Ingress player background check by NIA OPS. If a POC is rejected by NIA OPS, communities can provide a replacement candidate within one (1) week after being informed about this decision. Players who have received a warning or a ban in the twelve (12) months prior to being nominated are not eligible to be a POC. Note that Niantic reserves the right to deny any nominated POC for any reason.
Who selects the POCs?
In short, the local community. Our Ingress Vanguards will contact local communities to obtain the names of the players the local community has nominated to serve as POCs. The Ingress Vanguards will pass this information along to the Ingress Global Community Manager (GCM) who will initiate the Ingress player background check with NIA OPS. The GCM or Regional Community Managers (RCM) will provide the result of the background check to the Ingress Vanguards and the nominated player.
Do the Ingress Vanguards select the POCs?
No. The Ingress Vanguards merely gather information for Niantic to assess. Niantic believes that the Ingress Vanguards have a more direct connection to communities and are able to facilitate gathering the information more efficiently. In some cases, an Ingress Vanguard may belong to a local community hosting an event and have an opinion on who should be nominated from that community. However, they are expressing their opinion as a player member of that community and not as an Ingress Vanguard.
How many Anomaly POCs will be selected for a city?
Niantic will select no more than two (2) POCs per Faction, a total of four (4) POCs for both. It is advisable to identify backup POCs should any POC have to step down from his or her role for any reason.
Can a player be an Anomaly POC multiple times in a row for their city?
Yes but with limits. Niantic understands that each faction has a vast support network in place to help players plan and organize an Anomaly in their city. In order to facilitate diversity, establish new relationships and include new players in the Anomaly POC process, we are requiring one of the two POCs to have not been an Anomaly POC for any location in at least the last five years.
What is expected from an Anomaly POC?
Pre-Anomaly
Post-Anomaly
What is NOT expected from an Anomaly POC?
What is expected from Niantic?
What is not expected from Niantic?