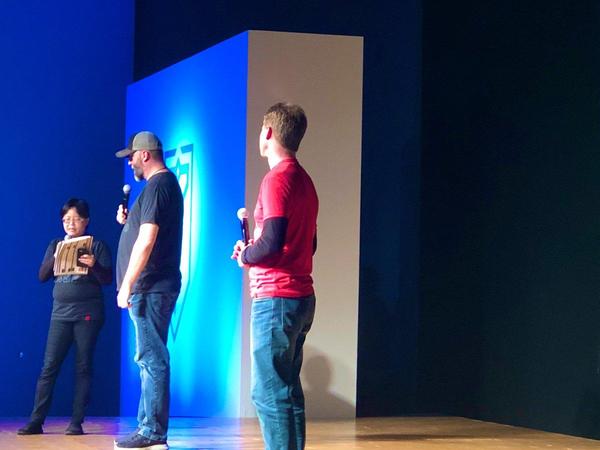 Question:
Where we should the community go after Google+ ends at the beginning of April?

Answered by Andrew Krug:
The good news is we're working on a solution. We are going to talk about it, publish it by next week before Google+ end to let you know what the plan is.
The good news is that when we released Ingress Prime wanted to create a home for Ingress. So we started doing a lot of research on what that could be. And I think we found a solution. So we're in the process of rolling now.
Yeah, everything would have been good. If October was the deadline. But it's changed to April.
So we will have more on that comparison.
It may not be ready by the time Google+ shuts down on April 2nd, you might be able to little bit after that.

Question:
With user authentication, when a phone number or something else return?

Answered by Scot Frank:
So I talked to our security and anti cheat team to ask them their thoughts on this, and also how this feature worked previously, and they said that actually didn't work as well as planned.
Because with recent technology, it's actually fairly inexpensive to rent a phone number. So almost anyone in the world anywhere could rent a phone number, in order to bypass verification.
However, we know that cheating is one of the top one, two features, and one of the most important aspects to our player community. And so that's why we really focused on improving and building up a great security system in Ingress Prime. However, we're not able to turn it on until we retire "[REDACTED]". So this is one of the reasons that we're really excited to move towards that point, so that we can improve the security and anti cheat system for all of our Ingress agents.
So once we retire "[REDACTED]", then we'll be turning on the security system.

Question:
When are you going to announce the next set of anomalies after this series ends with Abaddon Prime in May?

Answered by Andrew Krug:
So the good news is, I was told a few days ago that I can tell you when we're going to publish the next series of anomaly days.
We're going to publish the next anomaly dates on April 5th.
However, we will probably only release about six months worth of anomaly information. We will have events planned through 2020. But we learned some lessons announcing too much information too far in advance. And we want to avoid some of that negative impact on the community or you have to keep people engaged for such a long time.

Question:
Is there target date for discontinuing Scanner[REDACTED] in the near future?

Answered by Scot Frank:
So I have two questions for the audience.
How many of you love the original Ingress scanner or Scanner[REDACTED]?
So just a few of you.
My next question, how many of you want to see new features, better security, better performance, new types of gameplay?
Okay, so this is where we are at the intersection of the original Ingress scanner, which is had over six years of time to be perfected and developed and tested and iterated on.
And then we're also in the place where we want to be building the new features and designing new types of gameplay. Actually, the development team has so many things that are excited to build a we need the new infrastructure in order to release those features and provide better security. So we're at the cross section between those two.
So development team is all made of Ingress agents as well. And what we're trying to do is figure out how can we get closer to all of the performance and the features and the great experience that we have with the original Ingress.
And the team is working very hard. We're releasing new versions of Ingress Prime about every two weeks.
But we know that it's not quite perfect yet.
However, we're planning to retire "[REDACTED]", or the original Ingress scanner at the end of September. So that'll give us...
So please be patient with us, give us your feedback, we know that there's still more things to build on and improve with Ingress Prime, but the whole team as well as the whole company's committed to making a Ingress Prime, the best scanner ever and we're really excited to reach that phase where we're able to now introduce new features and new types of gameplay. So thank you very much for your patience and all of your feedback that you've given us on Ingress Prime. We're working really hard to make all of us happier.