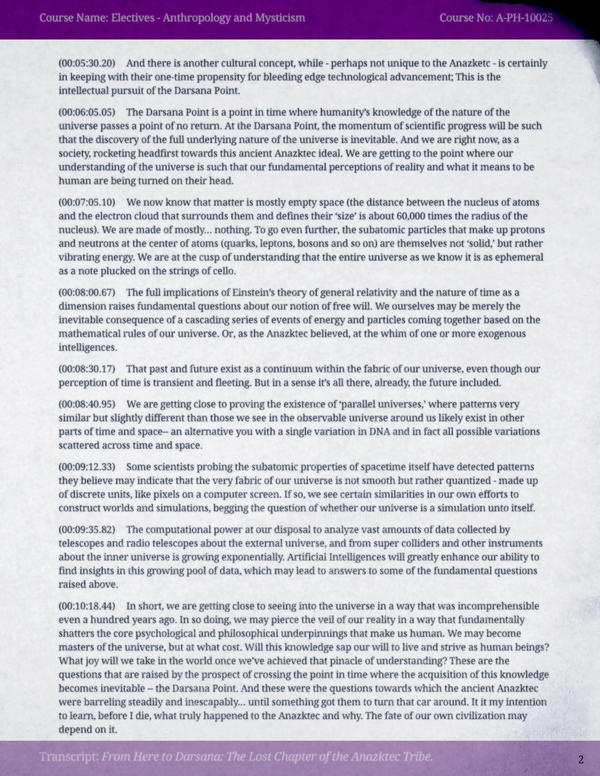 (00:05:30.20) And there is another cultural concept, while - perhaps not unique to the Anazketc - is certainly in keeping with their one-time propensity for bleeding edge technological advancement; This is the intellectual pursuit of the Darsana Point.

(00:06:05.05) The Darsana Point is a point in time where humanity's knowledge of the nature of the universe passes a point of no return. At the Darsana Point, the momentum of scientific progress will be such that the discovery of the full underlying nature of the universe is inevitable. And we are right now, as a society, rocketing headfirst towards this ancient Anazktec ideal. We are getting to the point where our understanding of universe is such that our fundamental perceptions of reality and what it means to be human are being turned on their head.

(00:07:05.10) We now know that matter is mostly empty space (the distance between the nucleus of atoms and the electron cloud that surrounds them and defines their 'size' is about 60,000 times the radius of the nucleus). We are made of mostly... nothing. To go even further, the subatomic particles that make up protons and neutrons at the center of atoms (quarks, leptons, bosons and so on) are themselves not 'solid,' but rather vibrating energy. We are at the cusp of understanding that the entire universe as we know it is as ephemeral as a note plucked on the strings of cello.

(00:08:00.67) The full implications of Einstein's theory of general relativity and the nature of time as a dimension raises fundamental questions about our notion of free will. We ourselves may be merely the inevitable consequence of a cascading series of events of energy and particles coming together based on the mathematical rules of our universe. Or, as the Anazktec believed, at the whim of one or more exogenous intelligences.

(00:08:30.17) That past and future exist as a continuum within the fabric of our universe, even though our perception of time is transient and fleeting. But in a sense it's all there, already, the future included.

(00:08:40.95) We are getting close to proving the existence of 'parallel universes,' where patterns very similar but slightly different than those we see in the observable universe around us likely exist in other parts of time and space - an alternative you with a single variation in DNA and in fact all possible variations scattered across time and space.

(00:09:12.33) Some scientists probing the subatomic properties of spacetime itself have detected patterns they believe may indicate that the very fabric of our universe is not smooth but rather quantized - made up of discrete units, like pixels on a computer screen. If so, we see certain similarities in our own efforts to construct worlds and simulations, begging the question of whether our universe is a simulation unto itself.

(00:09:35.82) The computational power at our disposal to analyze vast amounts of data collected by telescopes and radio telescopes about the external universe, and from super colliders and other instruments about the inner universe is growing exponentially. Artificial Intelligences will greatly enhance our ability to find insights in this growing pool of data, which may lead to answers to some of the fundamental questions raised above.

(00:10:18.44) In short, we are getting close to seeing into the universe in a way that was incomprehensible even a hundred years ago. In so doing, we may pierce the veil of our reality in a way that fundamentally shatters the core psychological and philosophical underpinnings that make us human. We may become masters of the universe, but at what cost. Will this knowledge sap our will to live and strive as human beings? What joy will we take in the world once we've achieved that pinacle of understanding? These are the questions that are raised by the prospect of crossing the point in time where the acquisition of this knowledge becomes inevitable - the Darsana Point. And these were the questions towards which the ancient Anazktec were barreling steadily and inescapably... until something got them to turn that car around. It it my intention to learn, before I die, what truly happened to the Anazktec and why. The fate of our own civilization may depend on it.

Transcript: From Here to Darsana: The Lost Chapter of the Anazktec Tribe.
2