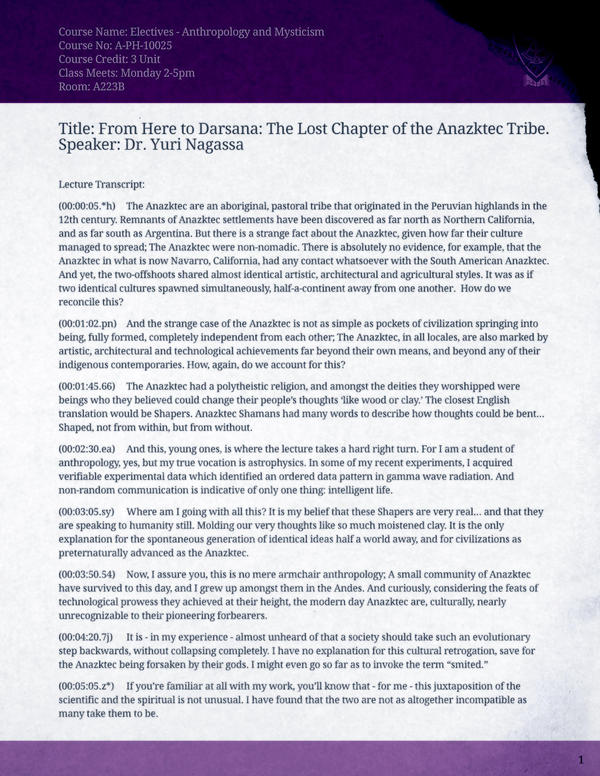 Title: From Here to Darsana: The Lost Chapter of the Anazktec Tribe.
Speaker: Dr. Yuri Nagassa

(00:00:05.*h) The Anazktec are an aboriginal, pastoral tribe that originated in the Peruvian highlands in the 12th century. Remnants of Anazktec settlements have been discovered as far north as Northern California, and as far south as Argentina. But there is a strange fact about the Anazktec, given how far their culture managed to spread; The Anazktec were non-nomadic. There is absolutely no evidence, for example, that the Anazktec in what is now Navarro, California, had any contact whatsoever with the South American Anazktec. And yet, the two-offshoots shared almost identical artistic, architectural and agricultural styles. It was as if two identical cultures spawned simultaneously, half-a-continent away from one another. How do we reconcile this?

(00:01:02.pn) And the strange case of the Anazktec is not as simple as pockets of civilization springing into being, fully formed, completely independent from other; The Anazktec, in all locales, are also marked by artistic, architectural and technological achievements far beyond their own means, and beyond any of their indigenous contemporaries. How, again, do we account for this?

(00:01:45.66) The Anazktec had a polytheistic religion, and amongst the deities they worshipped were beings who they believed could change their people's 'like wood or clay.' The closest English translation would be Shapers. Anazktec Shamans had many words to describe how thoughts could be bent... Shaped, not from within, but from without.

(00:02:30.ea) And this, young ones, is where the lecture takes a hard right turn. For I am a student of anthropology, yes, my true vocation is astrophysics. In some of my recent experiments, I acquired verifiable experimental data which identified an ordered data pattern in gamma wave radiation. And non-random communication is indicative of only one thing: intelligent life.

(00:03:05.sy) Where am I going with all this? It is my belief that these Shapers are very real... and that they are speaking to humanity still. Molding our very thoughts like so much moistened clay. It is the only explanation for the spontaneous generation of identical ideas half a world away, and for civilizations as preternaturally advanced as the Anazktec.

(00:03:50.54) Now, I assure you, this is no mere armchair anthropology; A small community of Anazktec have survived to this day, and I grew up amongst them in the Andes. And curiously, considering the feats of technological prowess they achieved at their height, the modern day Anazktec are, culturally, nearly unrecognizable to their pioneering forbearers.

(00:04:20.7j) It is - in my experience - almost unheard of that a society should take such an evolutionary step backwards, without collapsing completely. I have no explanation for this cultural retrogation, save for the Anazktec being forsaken by their gods. I might even go so far as to invoke the term "smited."

(00:05:05.z*) If you're familiar at all with my work, you'll know that - for me - this juxtaposition of the scientific and the spiritual is not unusual. I have found that the two are not as altogether incompatible as many take them to be.