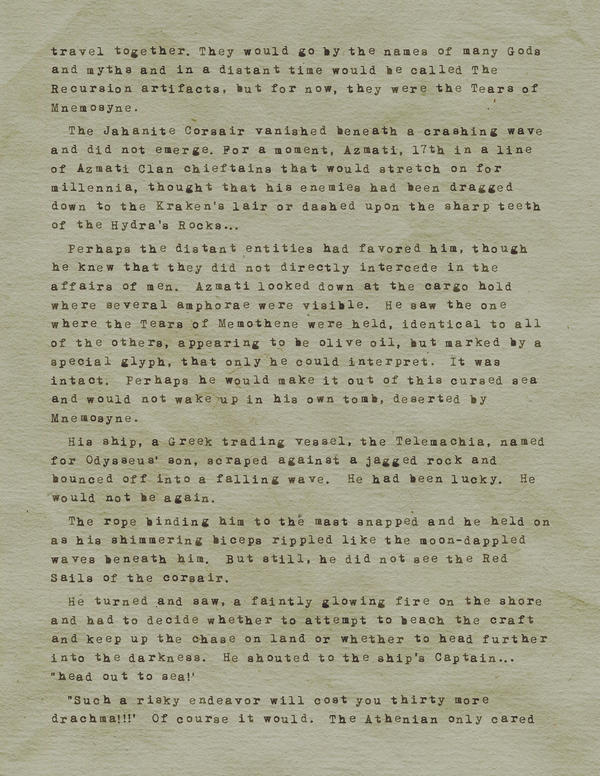 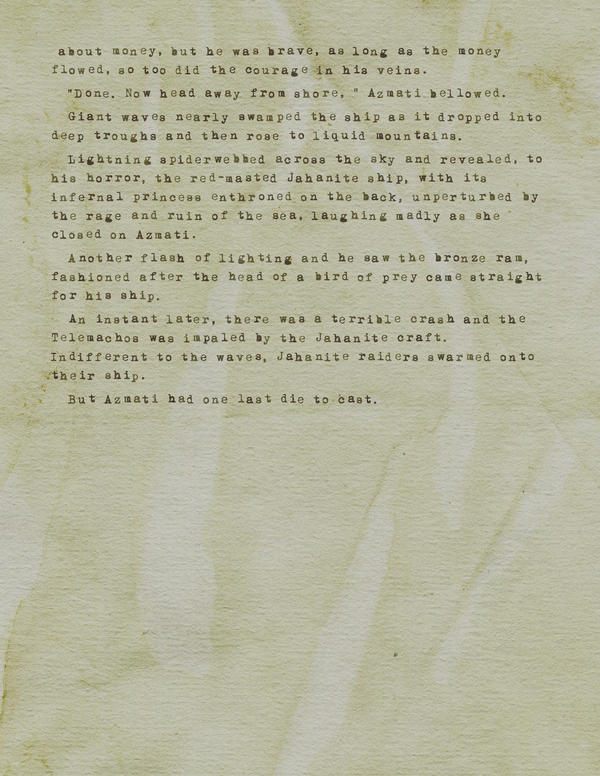 The Tears Of Mnemosyne
Transcripted by Ishira Tsubasa
By F. Ervin Howcraft

Flickering lightning ignited the nimble trireme as it desperately ingress the lashing, luminescent explosion of tempest and rage. The Azmatian explorer was lashed to the prow desperately trying to spot the jagged rocks that would tear apart his ship, spill it's precious, irreplaceable cargo into the stygian deaths of the Black Sea.

A Jovian bolt lit The Red Sails of the Jahanite corsairs who had followed him from the far eastern lands of his birth up the Dardanelles past Priam's broken fortress and into the sea where Jason and Heracles sought the golden fleece. He was sailing farther and farther from his destination, staying just ahead of those who would steal what the ancient Greeks had called 'The Tears of Mnemosyne' and drag them to their ensorcelled palace in the mysterious eastern lands.

The Tears of Mnemosyne had been named for the queen of the muses who embodied memories, for it was believed that all divinely inspired art came from the memory. Maktar Azmati knew that the 'Tears' were far older than ever known. They were 21 artifacts, disguised as coins, created by other kinds... those who went by many names who came from a distant place and a distant time who once inhabited earth and still spoke to the oracles and sibyls and prophets in their oracular shrines, a language without voice.

He knew not whose memories were contained within the tears, but he had suspicions. He knew that these artifacts, known in the book of Past Future contained things that echoed from the mist shrouded past and reverberated back from the glimmering future, but were valuable in the now for the past, present, future

travel together. They would go by the names of many Gods and myths and in a distant time would be called The Recursion artifacts, but for now, they were the Tears of Mnemosyne.

The Jahanite Corsair vanish beneath a crashing wave and did not emerge. For a moment, Azmati , 17th in a line of Azmati Clan chieftains that would stretch on for a millennia, thought that his enemies had been dragged down to the Kraken's lair or dashed upon the sharp teeth of the Hydra rocks...

Perhaps the distant entities had favored him, though he knew that they did not directly intercede in the affairs of men. Azmati looked down at the cargo hold where several amphorae were visible. He saw the one where the Tears of Memothene were held, identical to all the others, appearing to be olive oil, but marked by a special glyph, that only he could interpret. It was intact. Perhaps he would make it out of this cursed sea and would not wake up in his own tomb, deserted by Mnemosyne.

His ship, a Greek trading vessel, the Telemachia, named for Odysseus' son, scraped against the jagged rock and bounced off into a falling wave. He had been lucky. He would not be again.

The rope binding him to the mass snapped and he held on as his shimmering biceps rippled like the moon-dappled waves in beneath him. But still, he did not see the Red Sails of the corsair.

He turned and saw, a faintly glowing fire on the shore and had to decide whether to attempt to beach the craft and keep up the chase on land or whether to head further into the darkness. He shouted to the ship's Captain...
"head out to sea!"

"Such a risky endeavor will cost you thirty more drachma!!!' Of course it would. The Athenian only cared

about money, but he was brave, as long as the money flowed, so too did the courage in his veins.
"Done. Now head away from shore." Azmati bellowed.

Giant waves nearly swamped the ship as it dropped into deep troughs and then rose to liquid mountains.

Lightning spiderwebbed across the sky and revealed, to his horror, the red-masted Jahanite ship, with its infernal princess enthroned on the back, unperturbed by the rage and ruin of the sea, laughing madly as she closed on Azmati.

Another flash of lightning and he saw the bronze ram, fashioned after the head of a bird of prey came straight for his ship.

An instant later, there was a terrible crash and the Telemachos was impaled by the Jahanite craft.
Indifferent to the waves, Jahanite raiders swarmed onto their ship.

But Azmati had one last die to cast.