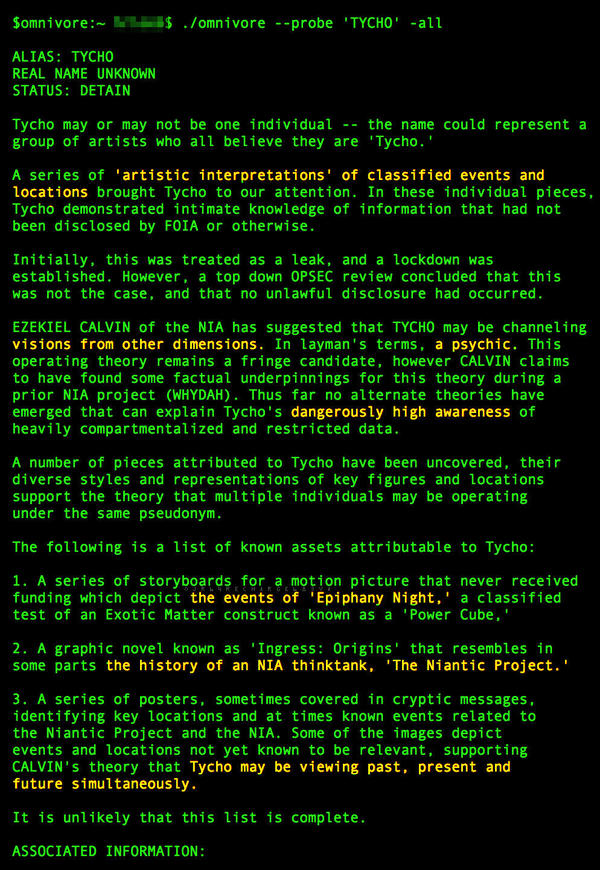 You'll get to know me better in the weeks that come. You'll learn that I'm dogged, and that I have access. Lots of it.

For now, just use it to your advantage. Here's some more intel about Tycho -- the psychic comic artist.

Tycho may or may not be one individual -- the name could represent a group of artists who all believe they are 'Tycho.'

A series of 'artistic interpretations' of classified events and locations brought Tycho to our attention. In these individual pieces, Tycho demonstrated intimate knowledge of information that had not been disclosed by FOIA or otherwise.

Initially, this was treated as a leak, and a lockdown was established. However, a top down OPSEC review concluded that this was not the case, and that no unlawful disclosure had occurred.

EZEKIEL CALVIN of the NIA has suggested that TYCHO may be channeling visions from other dimensions. In layman's terms, a psychic. This operating theory remains a fringe candidate, however CALVIN claims to have found some factual underpinnings for this theory during a prior NIA project (WHYDAH). Thus far no alternate theories have emerged that can explain Tycho's dangerously high awareness of heavily compartmentalized and restricted date.

A number of pieces attributed to Tycho have been uncovered, their diverse styles and representations of key figures and locations support the theory that multiple individuals may be operating under the same pseudonym.

The following is a list of known assets attributable to Tycho:

1. A series of storyboards for a motion picture that never recerived funding which depict the events of 'Epiphany Night,' a classified test of an Exotic Matter construct known as a 'Power Cube,'

2. A graphic novel known as 'Ingress: Origins' that resembles in some parts the history of an NIA thinktank, 'The Niantic Project.'

3. A series of posters, sometimes coverd in cryptic message, identifying key locations and at times known events related to the Niantic Project and the NIA. Some of the images depict events and locations not yet known to be relevant, supporting CALVIN's theory that Tycho may be viewing past, present and future simultaneously.