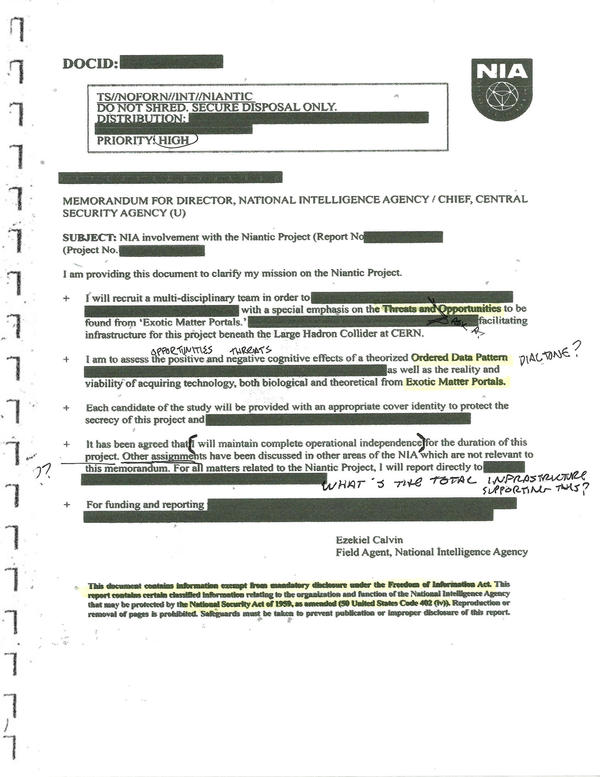 The NIA. An intelligence agency that -- if you believe the Wikipedia page -- was gracefully shut down in 1947.

Hardly. They specialize in fringe technology research. Psychometry... Remote Viewing... Telekinesis... Their projects know no bounds. But their latest foray... after decades of being a black budget joke among the powers that be... it turned heads.

They called it 'The Niantic Project.' And one very dedicated, very seasoned field officer took the entire project onto his shoulders.

His name is Ezekiel Calvin. Goes by Zeke. A smart, dedicated, patriotic guy. But you don't spend a lifetime investigating the strange and improbable and not end up a little... warped.

My suspicion? Ezekiel knew more about Exotic Matter than he let on when he brought this project into being... And the plans he set in motion have just begun.
Transcript
DOCID: XXXXXXXXXX
TS//NOFORN//INT//NIANTIC
DO NOT SHRED: SECURE DISPOSAL ONLY.
DISTRIBUTION: XXXXXXXXXX
PRIORITY: HIGH
XXXXXXXXXX
MEMORANDUM FOR DIRECTOR, NATIONAL INTELLIGENCE AGENCY / CHIEF, CENTRAL SECURITY AGENCY (U)
SUBJECT: NIA involvement with the Niantic Project (Report No XXXXXXXXXX
(Project No. XXXXXXXXXX
I am providing this docment to clarify my mission on the Niantic Project.
I will recruit a multi-discriplinary team in order to XXXXXXXXXX with a special emphasis on the Threats and Opportunities to be found from 'Exotic Matter Portals' XXXXXXXXXX facilitating infrastructure for this project beneath the Large Hadron Collider at CERN.
I am to assess the positive and negative cognitive effects of a theorized Ordered Data Pattern XXXXXXXXXX as well as the reality and viability of acquiring technology, both biological and theoretical from Exotic Matter Portals.
It has been agreed that I will maintain complete operational independence for the duration of this project. Other assignments have been discussed in other areas of the NIA which are not relevant to this memorandum. For all matters related to the Niantic Project, I will report directly to XXXXXXXXXX
For funding and reporting XXXXXXXXXX
Ezekiel Calvin
Field Agent, National Intelligence Agency
This document contains information exempt from mandatory disclosure under the Freedom of Information Act. This report contains certain classiffied information relating to the organization and function of the National Intelligence Agency that may be protected by the National Security Act of 1959, as amended (50 United States Code 402 (iv)). Reproduction or removal of pages is prohibited. Safeguards must be taken to prevent publication or improper disclosure of this report.