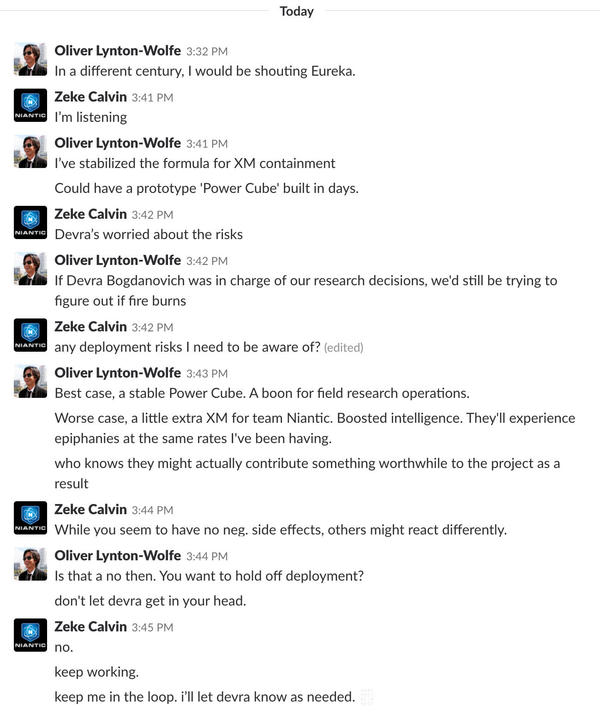 This self-important, arrogant, but (even I have to admit) brilliant researcher made the Niantic Project what it was. He unlocked the secrets of XM objects, like Resonators, learned how to interact with transdimensional Portals (using nothing more than a cell phone!), and created the XM Scanner... what you know as the 'game' Ingress.

Smart guy. But possessed by an insatiable hunger for knowledge. And that makes him dangerous.

How dangerous? If you want to know the answer to that, you have to learn about what really happened on one fateful night at the Niantic Project. To some, a powerful moment of awakening. An Epiphany Night. To others, a disaster. The Niantic Calamity.

One event. Two names. You'll figure out why soon enough.

Transcript
--TODAY--
Oliver Lynton-Wolfe 3:32 PM
In a different century, I would be shouting Eureka.

Oliver Lynton-Wolfe 3:41 PM
I've stabilized the formula for XM containment.
Could have a prototype 'Power Cube' built in days.

Oliver Lynton-Wolfe 3:42 PM
If Devra Bogdanovich was in charge of our research decisions, we'd still be trying to figure out if fire burns.

Zeke Calvin 3:42 PM
any deployment risks I need to be aware of? (edited)

Oliver Lynton-Wolfe 3:43 PM
Best case, a stable Power Cube. A boon for field research operations.
Worse case, a little extra XM for team Niantic. Boosted intelligence. They'll experience epiphanies at the same rates I've been having.
who knows they might actually contribute something worthwhile to the project as a result

Zeke Calvin 3:44 PM
While you seem to have no neg. side effects, others might react differently.

Oliver Lynton-Wolfe 3:44 PM
Is that a no then. You want to hold off deployment?
don't let devra get in your head.