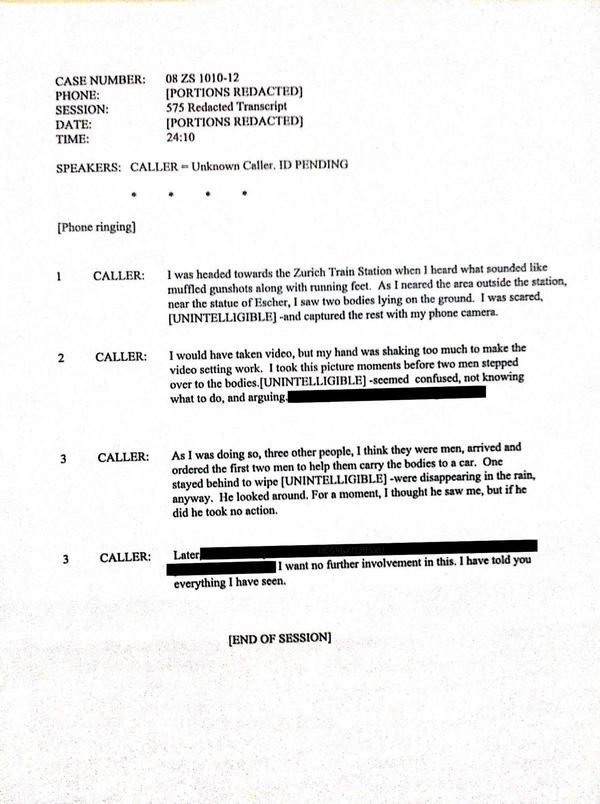 Witness
Witness report of the murders in Zurich. Just in case you thought I was making this up. I have tried to contact this witness. So far, no luck. Worried for her safety.

1 CALLER: I was headed towards the Zurich Train Station when I heard what sounded like muffled gunshots along with running feet. As I neared the area outside the station, near the statue of Escher, I saw two bodies lying on the ground. I was scared, [UNINTELLIGIBLE] -and captured the rest with my phone camera.

2 CALLER: I would have taken video, but my hand was shaking too much to make the video setting work. I took this picture moments before two men stepped over to the bodies.[UNITELLIGIBLE] -seemed confused, not knowing what to do, and arguing XXXXXXXXXX

3 CALLER: As I was doing so, three other people, I think they were men, arrived and ordered the first two men to help them carry the boddies to a car. One stayed behind to wipe [UNINTELLIGIBLE] -were disappearing in the rain, anyway. He looked around. For a moment, I thought he saw me, but if he did he took no action.

3 CALLER: Later XXXXXXXXXX I want no further involvement in this, I have told you everything I have seen.