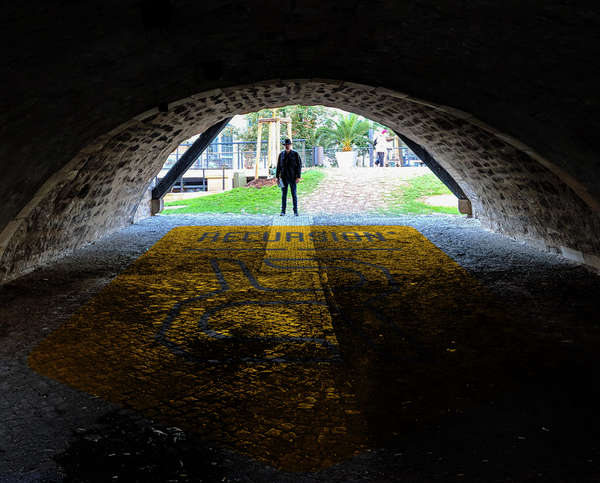 It looks like while he was there, he obtained some intriguing intel related to the upcoming #RecursionPrime Anomalies, including worldwide AP bonuses and Fielding challenges, and several new Anomaly mechanics for those within the Anomaly Zones.

Whether you are going to be on the ground at the Anomalies on October 20th or are planning to support your Faction from wherever you are in the world, there's important information for you in this document, Agent.

XM ANOMALIES OVERVIEW
"My theory is that certain places have an energy to them that not only attracts people, but events." jyq43ivhlmzmxv877nw
Hank Johnson
Archeologist, XM Researcher

An Anomaly is a special window in time where the actions of Ingress Agents and the state of XM at key locations can alter the course of a universe, changing its future.

Each XM Anomaly is distinct. Our research has found that Anomalies can affect people, certain unique kinds of XM objects and more.

Our mission is to predict how Anomalies can be understood and affected so that Agents can use the Ingress Scanner to control their outcome.

The final Anomaly series, Abaddon, will take place in May, 2019. At that time, we predict that the Faction that controls TS-OSIRIS will determine the fate of our entire universe.

It is unknown what lies beyond this rubicon.

RECURSION: BACKGROUND
We have determined that the XM researcher, Hank Johnson, stands at the center of the Recursion Anomaly series. The winners of Recursion will align Hank Johnson to their Faction.

At various times in his life, Hank Johnson has been an archeologist, a Spec-Ops soldier, a TV personality hosting the travel show 'Nomad,' and an XM researcher. The common thread through all those pursuits has been his ability to find 'Power Spots' -- places all around the world that emit a special kind of energy he is capable of sensing. Johnson is, in the purest sense of the word, an XM Sensitive, and the 'Power Spots' are Exotic Matter Portals, both modern and ancient.

Recent revelations have caused Hank Johnson to learn that he may no longer be human. First, Carrie Campbell, the Niantic Project's semiotician known to have powerful oracular visions, showed Hank Johnson a drawing of himself exploding into XM and then being reborn. Following that, Johnson received a package containing 21 'Recursion Artifacts' -- supposedly once the true agenda of Alexander III of Macedon's military campaign across Asia. A message in the package indicated that Hank Johnson had been unknowingly transformed into an 'XM Simulacrum' -- a living replica composed of XM.

Simulacra are able to maintain a stable form for 1331 days before undergoing a violent destabilization and rebirth, a process known as Recursion. If Hank is a Simulacrum, and he undergoes Recursion, he will lose all memories from the point he was first converted. The Artifacts, according to the message in the package, are a way to mitigate this.

Each Recursion Artifact, if activated by an XM Anomaly, can contain one memory and transmit it forward to Johnson's next Simulacrum. The Artifacts will also align that memory to the Faction that controls the Anomaly associated with it.

As a result, if a single Faction controls 13 of the 21 Artifacts, they will be able to define the alignment of the next Simulacrum of Hank Johnson.

Hank Johnson is by far one of the most knowledgeable and tactically skilled of the Niantic Researchers. Having him as an ally would be a powerful resource.

In determining the overall victory of the Recursion Anomaly Series, each Anomaly site will be able to activate and align one Recursion Artifact each.

In addition, six Recursion Artifacts will be activated by the Agents around the world, three on the first Anomaly day and three on the second Anomaly day, as part of a Global MU challenge.

IDENTIFYING THE ANOMALY ZONES
Each Anomaly will take place within a specific set of Portals designated as the Anomaly Zone. Maps will be published to clarify the approximate footprint of the Anomaly Zones. In addition, Portal ornaments will be present during the Anomaly to indicate which Portals are an active member of the Zone.

During the Anomaly, all active Portals in the Anomaly Zone will be ornamented on Intel and in the Scanner. In addition, Portal ornaments will be used to indicate specific kinds of Portals based on their role within the Anomaly. These different Portal types are outlined below.

Periphery Portal
Can be used to create for Periphery Fielding Operation.

MEASUREMENT TIMES
In order to evaluate the state of the ongoing Anomaly, NIA Command will measure the Anomaly a number of times over the course of the three hours.

During Hour 2, Measurements will be conducted every 20 minutes, at 20, 40 and 60 minutes after the start of Hour 2. undlbmatebzgfxgmmpmayhhd

Each Measurement will be conducted at a predetermined random moment within a 2 minute window. These windows will open at the times listed above, and close 2 minutes after.

Unique Portal Hacks will be measured from the beginning to the end of the Anomaly (~3 hours).

ANOMALY ZONE NEUTRALIZATION AND FIELD STABILITY
All Portals within the Anomaly Zones will be neutralized shortly before the Anomaly (approximately 2-3 hours before). This will have no effect on Portal inoculation times.

During the Anomaly, large Fields that cover significant parts of the Anomaly Zone and interfere with any of the competitions may spontaneously destabilize.

COMPETITION 1: ACTIVATE THE ARTIFACT (PORTAL CONTROL BATTLE)
At each Measurement Time, the state of all Anomaly Zone Portals will be tested.

The state of Periphery Portals and Start Portals for the Longest Link Path Challenge will be included in these Measurements.
yfe81hvou182uu

COMPETITION 2: CIRCLE OF MEMORIES (PERIPHERY FIELDING OPERATION)
At each Measurement Time, the specially ornamented 'Periphery Portals' will be measured for the presence of Unique Fields that make use of a single non-Anomaly Zone Portal.

Periphery Fields, in order to be scored, should use two distinct Periphery Portals, and one unique Portal from outside the Anomaly Zone. Any Field that does not do so, or that shares a non-Anomaly Zone Portal, will not be scored. This is explained further in the image below.

The configuration depicted above would result in the following: fnjijpresquevuffduf

Using up to 8 distinct Links, the Factions' goal is to create the longest Link path from their designated Start Portals. An example is shown below.

In this specific example, the Enlightened would score:

The #9 Enlightened Link would not contribute to their score, as it is past the 8 Link limit.

The Resistance would score:

The Resistance score would be higher, even though they used fewer Links, because their Link Path traversed greater distance. In the above example, both Factions had alternate pathways that resulted in shorter total distances for their Link paths. These alternate pathways would not be scored, and only the longest possible length over 8 Links would be measured.

The Link paths must start at the Faction specific Start Portals, but can use any Anomaly Zone Portal (including Periphery or Volatile Portals, or even another Faction's Start Portal) to complete the path. Use of a non-Anomaly Zone Portal will terminate a Path at that point. A Link Path that closes in on itself (a loop) will terminate that Path at that point. Link Paths created by one Faction originating at another Faction's Start Portal will have no value (eg. a Resistance Link Path starting from the Enlightened Start Portal).

At each Measurement, the longest distance created by the Factions' Link paths will be recorded. The highest lengths achieved over all Measurements will be used as that Faction's raw final score, similar to how the other competitions are measured.

COMPETITION 4: AWAKEN THE PORTALS (UNIQUE PORTAL HACKS)
From the beginning to the end of an Anomaly window (3 hours), each registered and checked-in Agent will have the number of Unique Anomaly Zone Portals they hacked counted.

For each Faction, the highest and lowest 15% will be removed, and from the remaining Agents, the average number of Unique Anomaly Zone Portals Hacked per Agent will be selected as the Faction's final raw score, which will be used for Anomaly scoring as detailed below

ANOMALY SCORING
For Competitions 1-3 (Portal Capture, Periphery Fielding, Longest Link Path), the Factions' raw final scores will be normalized to total 100. (Ex. 130 : 250 will become 34.21 : 65.79). For Competition 4 (Unique Portal Hacks), a total value of 33 will be assigned as a single, winner-takes-all sum to the winning Faction.

The total of these numbers will be used to create the final Anomaly score, out of 333, and the Faction with the higher number will be the winner of that Anomaly. In the event of a tie, the Unique Portal Hacks winner will be used as the tie-breaker.

In addition, the AP gained by all registered and checked-in Agents during the three hours of their local Anomaly window will be measured. That number, multiplied by 2, will be automatically added to their Scanner within the week following the Anomaly. These Agents will also receive an email informing them of the AP they have gained for their dedicated work in the Anomaly Zone.

GLOBAL MU CHALLENGE
Global MU levels will be measured once at the beginning of the Anomalies in Asia, and once again following the end of the Anomalies in the Americas. Over the course of this window, the Faction with the greater positive MU delta will win the Global MU Challenge, and activate and align 3 Recursion Artifacts on each of the Anomaly days. The delta is the difference between the ending MU and beginning MU for that Faction.
gwwmrullowgdmrhvxl

INTEL
It is possible that intelligence may emerge revealing some specific aspects of these Anomalies. Agents should remain vigilant in order to take advantage of these opportunities. 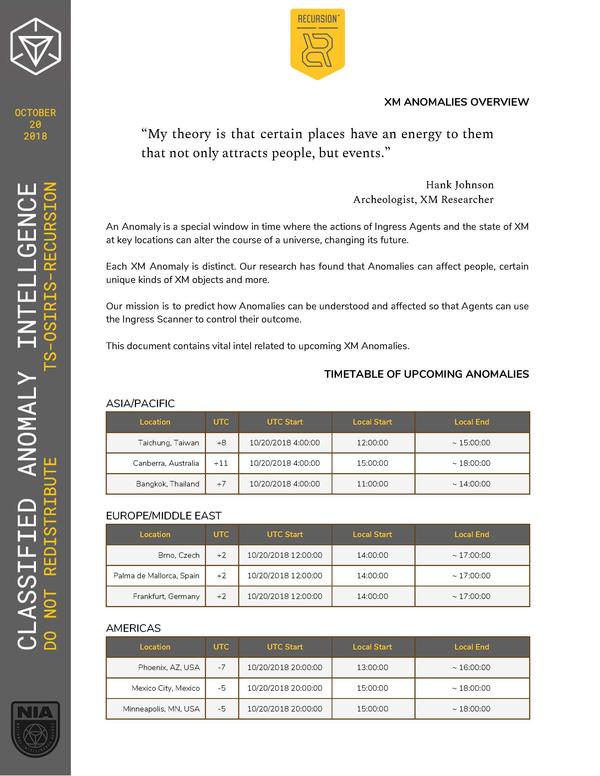 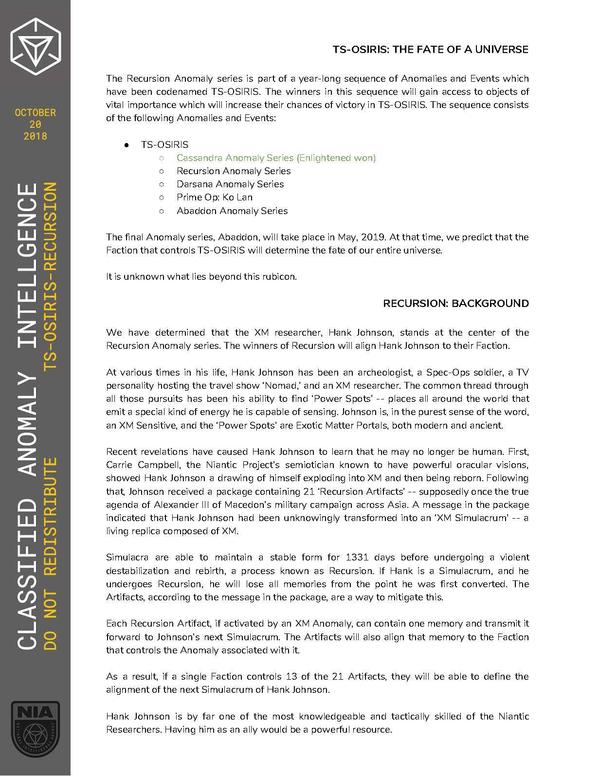 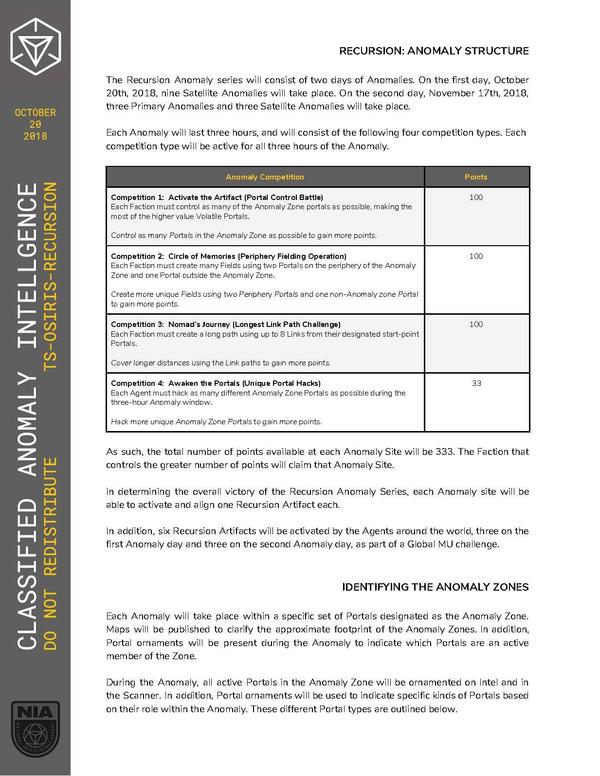 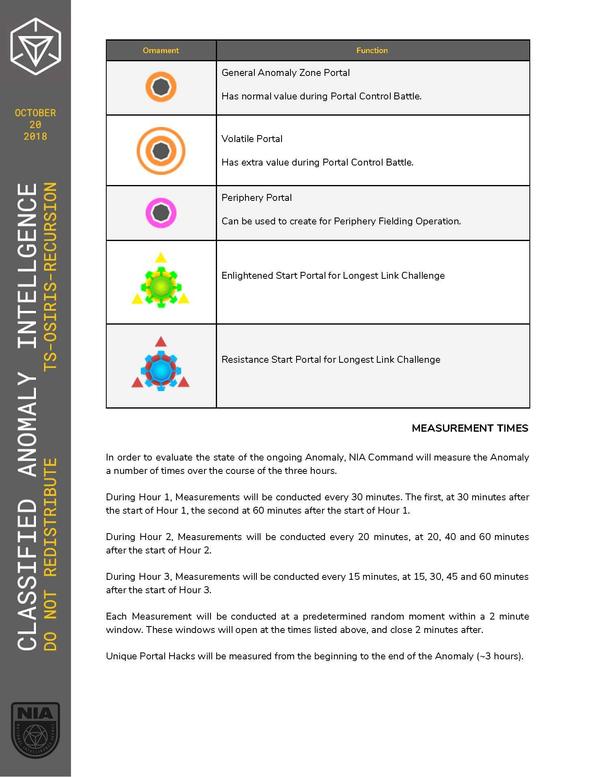 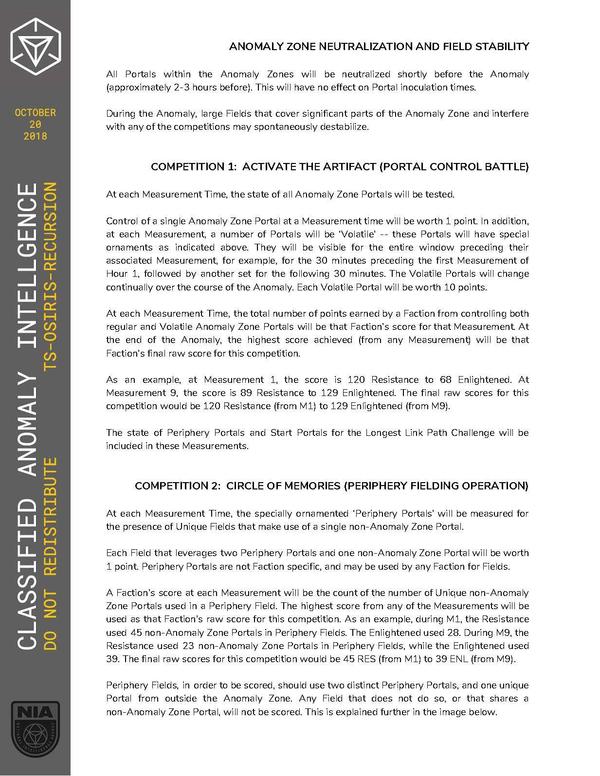 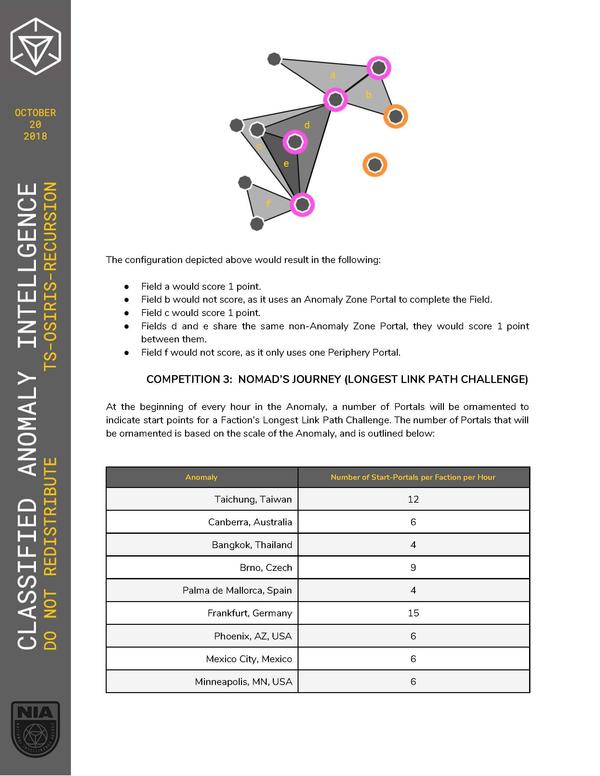 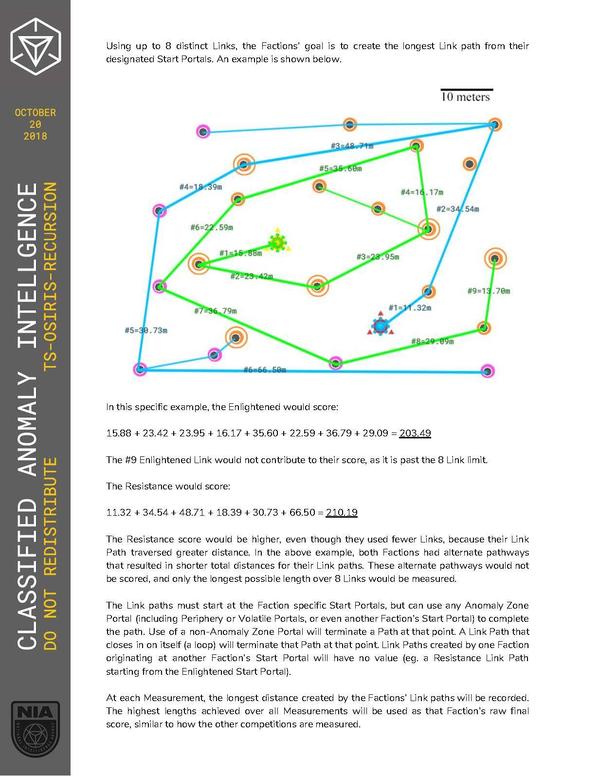 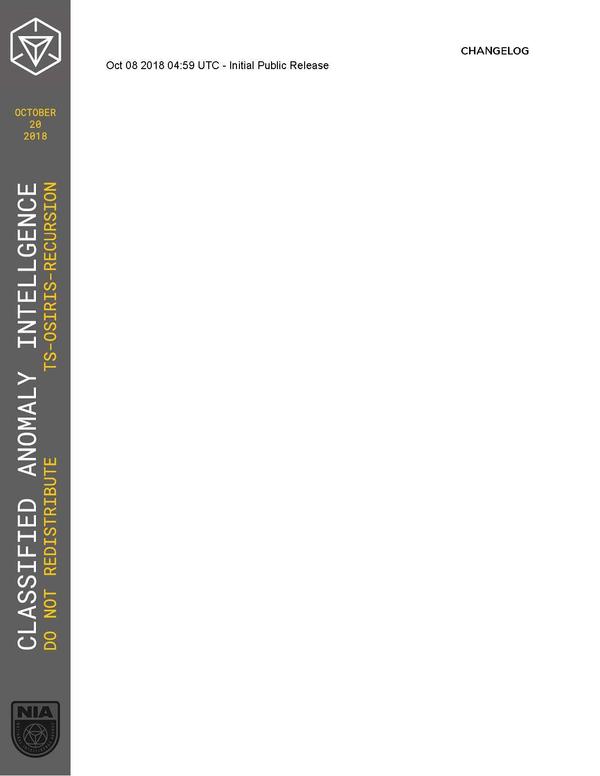