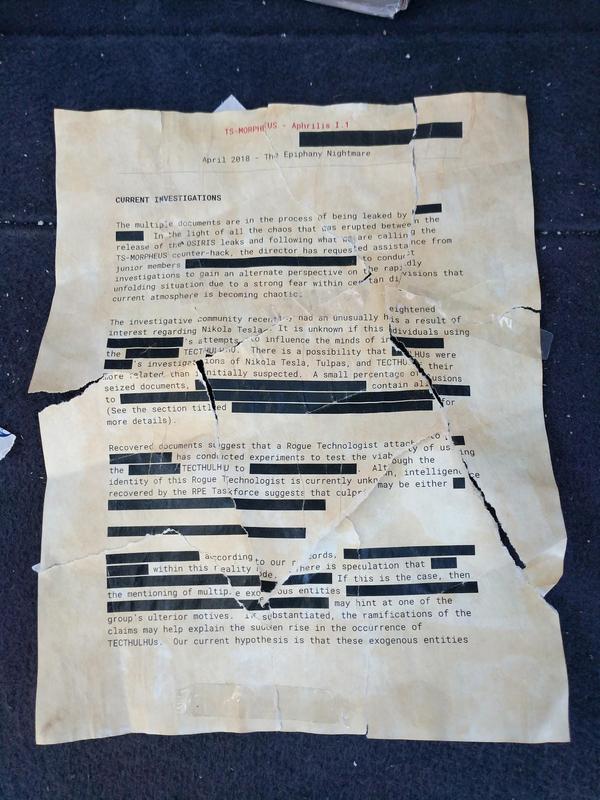 Ishira "Glyph Hunter" Tsubasa
2018/04/15 05:05:10
I took the time to transcribe the two documents from the San Jose and Palo Alto dead drops, so they would be easier to read, with the help of some of the agents that participated in finding the drops. Agent +Zandrae Pyreanor wrote out the entirety of Thetas and Tuas conversation! thank you so much!!

I find these documents rather interesting as i played a part in the RPE that involved Tesla and had done my own study on Telsa beforehand.... Also it speaks a lot about the involvement so far... New names are added to this investigation now. I hope you.ll share your thoughts on these pieces agents!


The multiple documents are in the process of being leaked by REDACTED. In the light of all the chaos that was erupted between the release of the OSIRIS leaks and following what we are calling the TS-MORPHEUS counter-hank, the director has requested assistance from junior members REDACTED to conduct investigations to gain an alternate perspective on the rapidly unfolding situation due to a strong fear within certain divisions that current atmosphere is becoming chaotic.

The investigative community recently had an unusually heightened interest regarding Nikola Tesla. It is unknown if this is the result of REDACTED's attempts to influence the minds of individuals using the REDACTED TECTHUHU. There is a possibility that REDACTED's investigations of Nikola Tesla, Tulpas, And TECTHULUs were more related than initially suspected. A small percentage of their seized documents, REDACTED contain allusions to REDACTED (See the section titled REDACTED for more details.)

REDACTED according to our records REDACTED with this reality node. There is speculation that REDACTED. If this is the case, then the mentioning of multiple exogenous REDACTED may hint at one of the group's ulterior motive. If substantiated, the ramifications of the claims may help explain the sudden rise in occurance of the TECTHULHUs. Our current hypothesis is that these exogenous entities

are REDACTED. Furthermore, we believe that REDACTED is covertly seeding the creation of these entities by treating them as REDACTED. Analytics are assessing the possibility that this may have been accomplished using a reverse engineered REDACTED
.
COMMUNICATION INTERCEPT

HUMINT has become aware of the existence of multiple leaked conversations between REDACTED. According to the various sources, many of these conversations, like the following took place prior to the release of the OSIRIS audio logs between Hank Johnson and Akira Tsukasa. However it is believed that PI/BETA conversation took place days in the following event.

THETA: Do you want to hear a story?

TAU: Depends, is it lewd? I want to hear you say something lewd.

THETA: No it isn't; but it might be something true.

THETA: Have you ever heard about the Montauk Project?

TAU: Was that the conspiracy theory about an exogenous creature that was spotted in a town in REDACTED that wreaked all sorts of havoc before REDACTED?

THETA: No, you are thinking about the mothman. . The Montauk Project was completely different. It was an top secret research project that died during the early 1980s which had Nikola Tesla as a director from 1940 to 1983.

TAU: That's not possible. How can Tesla head a research project that ended 40 years after his death?

THETA: He didn't die, per say, he recursed, often, which really must have sucked since his labs and apartment were raided by REDACTED.

TAU: Ok, let's assume that was true; what exactly was the Montauk Project about?

TAU: And you are telling this why?

THETA: I always thought it was an interesting story. Just like the one about Tesla's exogenous pigeon.