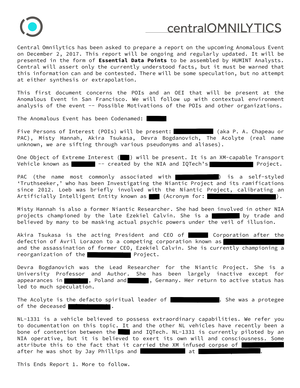 This report by an Intelligence and Analytics firm came across my way... there was very little in here that I wasn't aware of, but I suspect that future reports may cover more difficult ground... We'll likely need every member of the Investigative Community, as well as those in the Anomaly Zones to help out in the days to come...

So, a little refresher course... This report was actually clean when it got to me, but I have redacted a few key bits of data... Simple, if you've been paying attention. Can you fill in the blanks, Agents?

Central Omnilytics has been asked to prepare a report on the upcoming Anomalous Event on December 2, 2017. This report will be ongoing and regularly updated. It will be presented in the form of Essential Data Points to be assembled by HUMINT Analysts. Central will assert only the currently understood facts, but it must be warned that this information can and be contested. There will be some speculation, but no attempt at either synthesis or extrapolation.

This first document concerns the POIs and an OEI that will be present at the Anomalous Event in San Francisco. We will follow up with contextual environment analysis of the event -- Possible Motivations of the POIs and other organizations.

The Anomalous Event has been Codenamed: REDACTED.

Five Persons of Interest (POIs) will be present: REDACTED (aka P. A. Chapeau or PAC), Misty Hannah, Akira Tsukasa, Devra Bogdanovich, The Acolyte (real name unknown, we are sifting through various pseudonyms and aliases).
gzz36luhnepw8s2u

One Object of Extreme Interest (REDACTED) will be present. It is an XM-capable Transport Vehicle known as REDACTED -- created by the NIA and IQTech's REDACTED Project.

PAC (the name most commonly associated with REDACTED) is a self-styled 'Truthseeker,' who has been Investigating the Niantic Project and its ramifications since 2012. Loeb was briefly involved with the Niantic Project, calibrating an Artificially Intelligent Entity known as REDACTED(Acronym for: REDACTED).

Misty Hannah is also a former Niantic Researcher. She had been involved in other NIA projects championed by the late Ezekiel Calvin. She is a REDACTED by trade and believed by many to be masking actual psychic powers under the veil of illusion.

Akira Tsukasa is the acting President and CEO of REDACTED Corporation after the defection of Avril Lorazon to a competing corporation known as REDACTED and the assassination of former CEO, Ezekiel Calvin. She is currently championing a reorganization of the REDACTED Project.

Devra Bogdanovich was the Lead Researcher for the Niantic Project. She is a University Professor and Author. She has been largely inactive except for appearances in REDACTED, Poland and REDACTED, Germany. Her return to active status has led to much speculation.
gdukorw3h3ah58l6

The Acolyte is the defacto spiritual leader of REDACTED. She was a protegee of the deceased REDACTED.

NL-1331 is a vehicle believed to possess extraordinary capabilities. We refer you to documentation on this topic. It and the other NL vehicles have recently been a bone of contention between the REDACTED and IQTech. NL-1331 is currently piloted by an NIA operative, but it is believed to exert its own will and consciousness. Some attribute this to the fact that it carried the XM infused corpse of REDACTED after he was shot by Jay Phillips and REDACTED at REDACTED.

H. Richard Loeb
2017/11/27 14:56:55
This report by an Intelligence and Analytics firm came across my way... there was very little in here that I wasn't aware of, but I suspect that future reports may cover more difficult ground... We'll likely need every member of the Investigative...