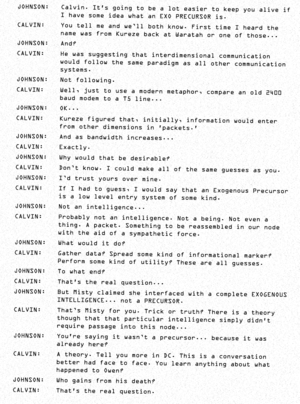 Came upon this surveilled conversation between Hank Johnson and Ezekiel Calvin... they're talking about 'EXOGENOUS PRECURSORS...' a term that's definitely been piquing my interest...

JOHNSON: Calvin. It's going to be a lot easier to keep you alive if I have some idea what an EXO PRECURSOR is.
CALVIN: You tell me and we'll both know. First time I heard the name was from Kureze back at Waratah or one of those...
JOHNSON: And?
CALVIN: He was suggesting that interdimensional communication would follow the same paradigm as all other communication systems.
JOHNSON: Not following.
CALVIN: Well, just to use a modern metaphor, compare an old 2400 baud modem to a T5 line...
JOHNSON: OK...
CALVIN: Kureze figured that, initially, information would enter from other dimensions in 'packets.'
JOHNSON: And as bandwidth increases...
CALVIN: Exactly.
JOHNSON: Why would that be desirable?
CALVIN: Don't know. I could make all of the same guesses as you.
JOHNSON: I'd trust yours over mine.
$$@#$#!$%!@!@$@$##%!!%#
#@$$@@$!!$$%@%#@!#$##
CALVIN: If I had to guess, I would say that an Exogenous Precursor is a low level entry system of some kind.
JOHNSON: Not an intelligence...
CALVIN: Probably not an intelligence. Not a being. Not even a thing. A packet. Something to be reassembled in our node with the aid of a sympathetic force.
JOHNSON: What would it do?
CALVIN: Gather data? Spread some kind of informational marker? Perform some kind of utility? These are all guesses.
JOHNSON: To what end?
CALVIN: That's the real question...
JOHNSON: But Misty claimed she interfaced with a complete EXOGENOUS INTELLIGENCE... not a PRECURSOR.
CALVIN: That's Misty for you. Trick or truth? There is a theory though that that particular intelligence simply didn't require passage into this node...
3guj4xskenyot9j4x
JOHNSON: You're saying it wasn't a precursor... because it was already here?
CALVIN: A theory. Tell you more in DC. This is a conversation better had face to face. You learn anything about what happened to Owen?
JOHNSON: Who gains from his death?
CALVIN: That's the real question.

H. Richard Loeb
2017/09/21 16:50:37
Came upon this surveilled conversation between Hank Johnson and Ezekiel Calvin... they're talking about 'EXOGENOUS PRECURSORS...' a term that's definitely been piquing my interest...