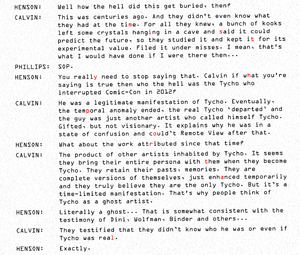 Here is the final fragment recovered by Misty Hannah last Friday... the details of her appearance in Los Angeles this Saturday are also coming into focus, if you know where to look...

HENSON: Well how the hell did this get buried, then?
CALVIN: This was centuries ago. And they didn't even know what they had at the time. For all they knew, a bunch of kooks left some crystals hanging in a cave and said it could predict the future, so they studied it and kept it for its experimental value. Filed it under misses. I mean, that's what I would have done if I were there then...
PHILLIPS: SOP.
HENSON: You really need to stop saying that. Calvin if what you're saying is true then who the hell was the Tycho who interrupted Comic-Con in 2012?7rup3gtaggksxf1v0x
CALVIN: He was a legitimate manifestation of Tycho. Eventually, the temporal anomaly ended, the real Tycho 'departed' and the guy was just another artist who called himself Tycho. Gifted, but not visionary. It explains why he was in a state of confusion and could't Remote View after that.
HENSON: What about the work attributed since that time?
CALVIN: The product of other artists inhabited by Tycho. It seems they bring their entire persona with them when they become Tycho. They retain their pasts, memories. They are complete versions of themselves, just enhanced temporarily and they truly believe they are the only Tycho. But it's a time-limited manifestation. That's why people think of Tycho as a ghost artist.IVEcCxIVEWQnh0diWkxksGhTZsIXq
HENSON: Literally a ghost... That is somewhat consistent with the testimony of Dini, Wolfman, Binder and others...
CALVIN: They testified that they didn't know who he was or even if Tycho was real.
HENSON: Exactly.

H. Richard Loeb
2017/07/26 14:13:21
Here is the final fragment recovered by Misty Hannah last Friday... the details of her appearance in Los Angeles this Saturday are also coming into focus, if you know where to look...