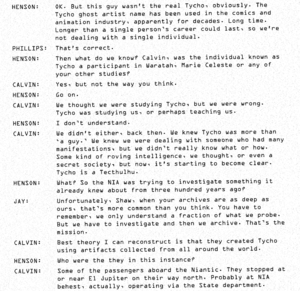 Here is the second fragment of the document uncovered by Misty Hannah last Friday. I shared Part 1 yesterday.

My sources tell me there may be an opportunity to see Misty again in Los Angeles this coming Saturday afternoon... stay tuned for details on that...

HENSON: OK. But this guy wasn't the real Tycho, obviously. The Tycho ghost artist name has been used in the comics and animation industry, apparently for decades. Long time. Longer than a single person's career could last, so we're not dealing with a single individual.
PHILLIPS: That's correct.
HENSON: Then what do we know? Calvin, was the individual known as Tycho a participant in Waratah, Marie Celeste or any of your other studies?
CALVIN: Yes, but not the way you think.
HENSON: Go on.1404211718j09161804l121904l162022j2118
CALVIN: We thought we were studying Tycho, but we were wrong. Tycho was studying us, or perhaps teaching us.
HENSON: I don't understand.
CALVIN: We didn't either, back then. We knew Tycho was more than 'a guy.' We knew we were dealing with someone who had many manifestations, but we didn't really know what or how. Some kind of roving intelligence, we thought, or even a secret society, but now, it's starting to become clear. Tycho is a Tecthulhu.
HENSON: What? So the NIA was trying to investigate something it already knew about from three hundred years ago?
JAY: Unfortunately, Shaw, when your archives are as deep as ours, that's more common than you think. You have to remember, we only understand a fraction of what we probe. But we have to investigate and then we archive. That's the mission.
CALVIN: Best theory I can reconstruct is that they created Tycho using artifacts collected from all around the world.
HENSON: Who were the they in this instance?rj6e8dacfv2dif9tey
CALVIN: Some of the passengers aboard the Niantic. They stopped at or near El Jupiter on their way north. Probably at NIA behest, actually, operating via the State department.

H. Richard Loeb
2017/07/25 14:59:27
Here is the second fragment of the document uncovered by Misty Hannah last Friday. My sources tell me there may be an opportunity to see Misty again in Los Angeles this coming Saturday afternoon... stay tuned for details on that...