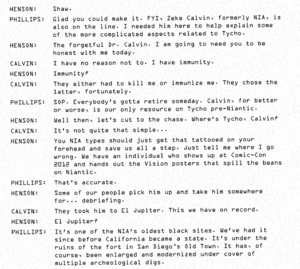 Misty was able to bring to the surface a long and detailed conversation about the true history of Tycho last Friday. This is its first fragment.

Many of those involved in the deeper aspects of the Investigative community may already have laid their eyes on this. The mission that helped reveal this information also suggested the possibility of another sighting of Misty -- later this week in Los Angeles. Agents, do any of you know any details about this?

HENSON: Shaw.
PHILLIPS: Glad you could make it. FYI, Zeke Calvin, formerly NIA, is also on the line. I needed him here to help explain some of the more complicated aspects related to Tycho.
HENSON: The forgetful Dr. Calvin. I am going to need you to be honest with me today.
CALVIN: I have no reason not to. I have immunity.
HENSON: Immunity?
CALVIN: They either had to kill me or immunize me. They chose the latter, fortunately.
PHILLIPS: SOP. Everybody's gotta retire someday. Calvin, for better or worse, is our only resource on Tycho pre-Niantic.mxqgiemuruofsvederifusyv
HENSON: Well then, let's cut to the chase. Where's Tycho, Calvin?
CALVIN: It's not quite that simple...
HENSON: You NIA types should just get that tattooed on your forehead and save us all a step. Just tell me where I go wrong. We have an individual who shows up at Comic-Con 2012 and hands out the Vision posters that spill the beans on Niantic.
PHILLIPS: That's accurate.7vox3mafra8nc6n
HENSON: Some of our people pick him up and take him somewhere for... debriefing.
CALVIN: They took him to El Jupiter. This we have on record.
HENSON: El Jupiter?
PHILLIPS: It's one of the NIA's oldest black sites. We've had it since before California became a state. It's under the ruins of the fort in San Diego's Old Town. It has, of course, been enlarged and modernized under cover of multiple archeological digs.

H. Richard Loeb
2017/07/24 13:48:07
Misty was able to bring to the surface a long and detailed conversation about the true history of Tycho last Friday. This is its first fragment.