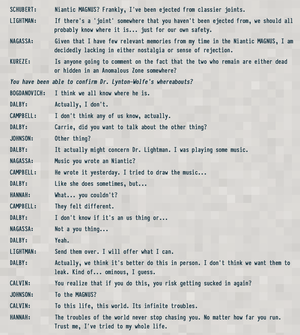 The former members of the Niantic MAGNUS discuss the troubles of the world...

SCHUBERT: Niantic MAGNUS? Frankly, I've been ejected from classier joints.
LIGHTMAN: If there's a 'joint' somewhere that you haven't been ejected from, we should all probably know where it is... just for our own safety.
NAGASSA: Given that I have few relevant memories from my time in the Niantic MAGNUS, I am decidedly lacking in either nostalgia or sense of rejection.
KUREZE: Is anyone going to comment on the fact that the two who remain are either dead or hidden in an Anomalous Zone somewhere?

You have been able to confirm Dr. Lynton-Wolfe's whereabouts?

BOGDANOVICH: I think we all know where he is.
DALBY: Actually, I don't.
CAMPBELL: I don't think any of us know, actually.
DALBY: Carrie, did you want to talk about the other thing?
JOHNSON: Other thing?
raah2k6ra9m5fmv
DALBY: It actually might concern Dr. Lightman. I was playing some music.
NAGASSA: Music you wrote an Niantic?
CAMPBELL: He wrote it yesterday. I tried to draw the music...
DALBY: Like she does sometimes, but...
HANNAH: What... you couldn't?
CAMPBELL: They felt different.
DALBY: I don't know if it's an us thing or...
NAGASSA: Not a you thing...
DALBY: Yeah.
clvpxug9khns26o4
LIGHTMAN: Send them over. I will offer what I can.
DALBY: Actually, we think it's better do this in person. I don't think we want them to leak. Kind of... ominous, I guess.
CALVIN: You realize that if you do this, you risk getting sucked in again?
JOHNSON: To the MAGNUS?
CALVIN: To this life, this world. Its infinite troubles.
HANNAH: The troubles of the world never stop chasing you. No matter how far you run. Trust me, I've tried to my whole life.