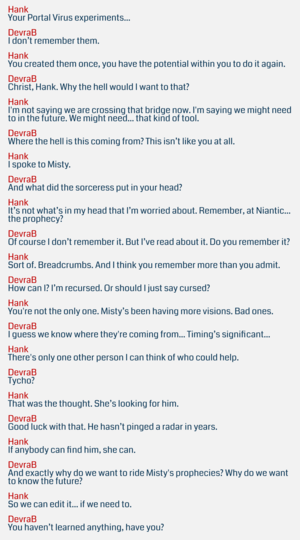 Hank makes contact with Misty... It's unclear what they talked about it, but whatever it is, it appears to have shaken him...

Hank: Your Portal Virus experiments...
DevraB: I don't remember them.
Hank: You created them once, you have the potential within you to do it again.
DevraB: Christ, Hank. Why the hell would I want to that?
Hank: I'm not saying we are crossing that bridge now. I'm saying we might need to in the future. We might need... that kind of tool.
DevraB: Where the hell is this coming from? This isn't like you at all.
Hank: I spoke to Misty.
wd7,vol3kxcnr1
DevraB: And what did the sorceress put in your head?
Hank: It's not what's in my head that I'm worried about. Remember, at Niantic... the prophecy?
DevraB: Of course I don't remember it. But I've read about it. Do you remember it?
Hank: Sort of. Breadcrumbs. And I think you remember more than you admit.
DevraB: How can I? I'm recursed. Or should I just say cursed?
Hank: You're not the only one. Misty's been having more visions. Bad ones.
DevraB: I guess we know where they're coming from... Timing's significant...
Hank: There's only one other person I can think of who could help.
DevraB: Tycho?
axhchcddqdxmlunrqopoprnwyrssyiw
Hank: That was the thought. She's looking for him.
DevraB: Good luck with that. He hasn't pinged a radar in years.
Hank: If anybody can find him, she can.
DevraB: And exactly why do we want to ride Misty's prophecies? Why do we want to know the future?
Hank: So we can edit it... if we need to.
DevraB: You haven't learned anything, have you?