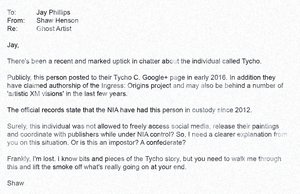 It seems there are increased signals about Tycho in the top secret airwaves of the Intel Community... but why?

To: Jay Phillips
From: Shaw Henson
Re: Ghost Artist

There's been a recent and marked uptick in chatter about the individual called Tycho.

Publicly, this person posted to their Tycho C. Google+ page in early 2016. In addition they have claimed authorship of the Ingress: Origins project and may also be behind a number of 'artistic XM visions' in the last few years.nhs
76ylwb542pq

The official records state that the NIA have had this person in custody since 2012.

Surely, this individual was not allowed to freely access social media, release their paintings and coordinate with publishers while under NIA control? So, I need a clearer explanation from you on this situation. Or is this an impostor? A confederate?
efeeffedefaffa9f66efbf68ee
eee9efaf66fa9faafaef66eea

Frankly, I'm lost. I know bits and pieces of the Tycho story, but you need to walk me through this and lift the smoke off what's really going on at your end.