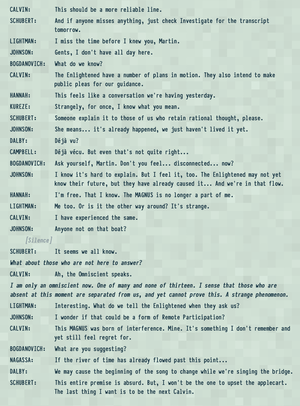 Perhaps you thought the news article I shared yesterday about causality, destiny and fate in the quantum world yesterday was a coincidence or the result of a whim.

As the Enlightened were working day and night to make the best of the choice they had been presented with, I came across this strange conversation.

Although I was not a participant in it, I chose to withhold it to honor their intent and wishes. I don't know if seeing this information before they announced their decision would have changed something for the Enlightened, but these former MAGNUS members felt they were at the crest of a wave that had not yet emerged from the ocean -- it was a strange thing to see, and something beyond my limited understanding.

For better or worse, both I and they chose not to interfere with this strange temporal desynchronization.

CALVIN: This should be a more reliable line.
SCHUBERT: And if anyone misses anything, just check Investigate for the transcript tomorrow.
LIGHTMAN: I miss the time before I knew you, Martin.
JOHNSON: Gents, I don't have all day here.
BOGDANOVICH: What do we know?
hcz30acpl711ye
CALVIN: The Enlightened have a number of plans in motion. They also intend to make public pleas for our guidance.
HANNAH: This feels like a conversation we're having yesterday.
KUREZE: Strangely, for once, I know what you mean.
SCHUBERT: Someone explain it to those of us who retain rational thought, please.
JOHNSON: She means... it's already happened, we just haven't lived it yet.
DALBY: Déjà vu?
CAMPBELL: Déjà vécu. But even that's not quite right...
BOGDANOVICH: Ask yourself, Martin. Don't you feel... disconnected... now?
JOHNSON: I know it's hard to explain. But I feel it, too. The Enlightened may not yet know their future, but they have already caused it... And we're in that flow.
HANNAH: I'm free. That I know. The MAGNUS is no longer a part of me.
LIGHTMAN: Me too. Or is it the other way around? It's strange.
CALVIN: I have experienced the same.
JOHNSON: Anyone not on that boat?
lpp44xksqmyt419jg
[Silence]
SCHUBERT: It seems we all know.
What about those who are not here to answer?
CALVIN: Ah, the Omniscient speaks.
I am only an omniscient now. One of many and none of thirteen. I sense that those who are absent at this moment are separated from us, and yet cannot prove this. A strange phenomenon.
LIGHTMAN: Interesting. What do we tell the Enlightened when they ask us?
JOHNSON: I wonder if that could be a form of Remote Participation?
CALVIN: This MAGNUS was born of interference. Mine. It's something I don't remember and yet still feel regret for.
BOGDANOVICH: What are you suggesting?
NAGASSA: If the river of time has already flowed past this point...
DALBY: We may cause the beginning of the song to change while we're singing the bridge.
SCHUBERT: This entire premise is absurd. But, I won't be the one to upset the applecart. The last thing I want is to be the next Calvin.

H. Richard Loeb
2017/07/05 18:33:49
Perhaps you thought the news article I shared yesterday about causality, destiny and fate in the quantum world yesterday was a coincidence or the result of a whim. No. As the Enlightened were working day and night to make the best of the choice they had...