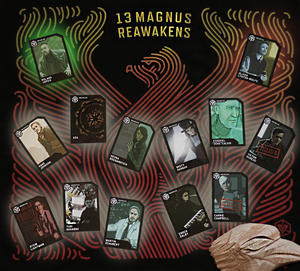 As a result of their victory during #FateOfThe13, the Enlightened gained control of 12 of the 13 Archetypes in the current Niantic MAGNUS.

With the exception of Oliver Lynton-Wolfe -- the Alchemist -- the Enlightened held the fate of each Niantic Researcher's membership in the MAGNUS in their hands. Today, their decision has been revealed.

Nearly every member of the MAGNUS has been freed of the connections that bound them to the group created by Ezekiel Calvin during the Niantic Project. Only Jarvis and Lynton-Wolfe remain... The fate of the remaining researchers, in some way, has been returned to them -- an act of generosity, but also one with many unknown consequences -- both for the researchers themselves as well as the Niantic MAGNUS.

I applaud the thoughtful leadership displayed by the Enlightened Agents who helped represent their Faction during this process. Liberty Naud, +Matt Stevenson, +Kristen, +Cate Goodfriend, +Tina W., +Winona Tong and +Dillion C, you undertook something massive and faced its challenges head on.

The full text of their decision is available on Google+ here.

We don't know what lasting consequences our choices will hold; but we are certain the unnatural "Niantic Magnus" that was formed when Ezekiel Calvin engineered the event that "forcibly converted [the Magnus members] into Simulacra", must come to an end.

+Hank Johnson was freed from his endless cycles as a Simulacrum when Azmati sacrificed himself while destroying the Shōnin Stone, and we will not send him back. Johnson will not stay in the Niantic Magnus. We hope that he will fulfill the destiny Azmati hinted at, and find the all-Enlightened "13MAGNUS" he is destined to be a part of.9hk2ta4oa5rv8zh

For +Roland Jarvis, we have chosen to leave him within the Niantic Magnus. Once Jarvis became a part of the portal network, he was the outlier who embraced this evolution. In addition, after his many cycles of death and rebirth, we are concerned that releasing Jarvis from the Magnus may cause the loss of what remains of this great man. We leave him where he has chosen to be, with the Ultimate.

Other members of the Niantic Magnus have either spoken out against their imprisonment as Simulacra or not spoken at all. +Devra Bogdanovich and +Carrie Campbell both have shown ill effects from being a part of the Niantic Magnus and a desire to be free from them. We will not be responsible for increasing those ill effects, and so +enoch dalby must join Campbell outside the Magnus, as we are not sure their connection could sustain the separation.

+A Detection Algorithm, we don't trust you. As you have continued to evolve, you have pushed to become the AI that the N'Zeer sought. You have been scattered and are now struggling to find yourself once again. You are not ready for a Magnus.

Of all the researchers, it is perhaps fitting that Ezekiel Calvin was also sentenced to roam without his memories as a Simulacrum, as it was he who engineered the the 'accident' that artificially caused the formation of the Niantic Magnus. We strongly suspect that Victor Kureze's intentions have not been fully revealed. Neither of you can be trusted with the power and influence over the portal network granted to those within a Magnus, therefore you will no longer be a part of this one.

+Martin Schubert It is clear from your shock that despite what you wanted from life, from Marlie, as a Simulacrum you were unhappy it would all be taken away from you again in 1331 days. Additionally, your dealings are suspect and there is much we don't know about your current intentions. Are you working for Jahan? We can't take the risk that you would support a Resistance-aligned Anti-Magnus.7ujph4yt4po6zh2

While your alignment has been contested, +Stein Lightman you have continued to pursue the mysteries of the glyphs and the answers we are only beginning to understand. The complete memory loss that occurs with Recursing every 1331 days does not support the continuancy needed for a researcher trying to translate a language from a dimension breaking into ours. Our need is great, and we need you outside the Magnus.

+Yuri Alaric Nagassa we hope you will continue to aid Hank Johnson in his search for answers. We believe you are best able to do so from outside the Magnus.

This is not just another government project, +Misty Hannah and your actions after your recursion show that you would have never consented to losing your memories, with your existence being left at the mercy of others. You will no longer be a part of the Niantic Magnus.

+Oliver Lynton-Wolfe we are sorry we can not also free you from this inhuman recursion as a Simulacrum; we were so close. Hopefully there is an end for your suffering close at hand.

Enlightened Agents, we have spent the last five days quizzing our compatriots, digging through references, and always following our dedication to the evolution of humanity. Thank you for weighing in through your local communities and on our posts. Your voices have been heard and we sincerely hope these decisions adequately reflect your efforts in #Fateofthe13.

H. Richard Loeb
2017/06/20 12:10:46
As a result of their victory during #FateOfThe13, the Enlightened gained control of 12 of the 13 Archetypes in the current Niantic MAGNUS. With the exception of Oliver Lynton-Wolfe -- the Alchemist -- the Enlightened held the fate of each Niantic...