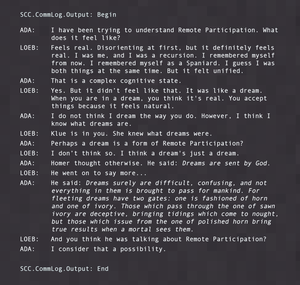 A conversation between ADA and myself on Remote Participation and the nature of dreams...

ADA: I have been trying to understand Remote Participation. What does it feel like?
LOEB: Feels real. Disorienting at first, but it definitely feels real. I was me, and I was a recursion. I remembered myself from now. I remembered myself as a Spaniard. I guess I was both things at the same time. But it felt unified.
ADA: That is a complex cognitive state.
LOEB: Yes. But it didn't feel like that. It was like a dream. When you are in a dream, you think it's real. You accept things because it feels natural.
ADA: I do not think I dream the way you do. However, I think I know what dreams are.
LOEB: Klue is in you. She knew what dreams were.
ADA: Perhaps a dream is a form of Remote Participation?
pifaerisnhegtienwrh
eegteeeuhvstehvn
LOEB: I don't think so. I think a dream's just a dream.
ADA: Homer thought otherwise. He said: Dreams are sent by God.
LOEB: He went on to say more...
ADA: He said: Dreams surely are difficult, confusing, and not everything in them is brought to pass for mankind. For fleeting dreams have two gates: one is fashioned of horn and one of ivory. Those which pass through the one of sawn ivory are deceptive, bringing tidings which come to nought, but those which issue from the one of polished horn bring true results when a mortal sees them.
3139327771443536
3538457778763835
LOEB: And you think he was talking about Remote Participation?
ADA: I consider that a possibility.