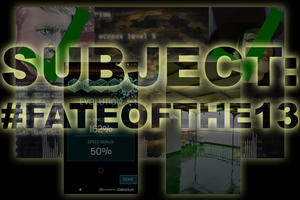 Operation Essex
2017/06/16 18:41:27
Good luck agents. There is no wrong choice to be made here.
There are only two mistakes one can make along the road to truth; not going all the way, and not starting.

Liberty Naud (LibertyBot2)
2017/6/16 04:20:05
"Agents, I have assembled you because you [seven] are Enlightened and were the Team Leads at 13MAGNUS Reawakens at Camp Navarro, CA. As cliché as it sounds, I have a mission for you if you choose to accept it. The Fate of the 12 rests in your hands."

Weeks after #13MAGNUSReawakens event at Camp Navarro many of us are still feeling the residual XM effects. It's as if our roles in creating an anomalous event were not quite finished...and then none other +H. Richard Loeb (P. A. Chapeau himself) reached out to: Myself, +Matt Stevenson +Kristen, +Cate Goodfriend, +Tina W., +Winona Tong and +Dillion C

We were collectively awed and honored and a bit overwhelmed.

"At Noon PST on Monday June 19th you must tell me what fate holds for the twelve researchers whose shards you captured during Fate Of The 13 event. Consult with your factionmates and amongst yourselves. Will each of the researchers retain their archetype or will you choose to change them? The answer lies with you."

Immediately we discussed the weight of this monumental decision. This wasn't just the Fate of the 13 - this responsibility carried the weight of the future. Not only for our faction, but for the world. One wrong decision could result in a future catastrophic Magnus event. Questions began pouring out:

- Do we swing the Magnus in favor of the Enlightened?
- Will making it balanced create a stable Magnus?
- Do we WANT a stable Magnus to manifest, or do we ensure the 13 can't manifest that kind of energy?
- Who has evolved beyond their original archetype and no longer belongs in the Magnus?
- If we remove researchers from an archetype, who or what will fill that role in the future?

One thing was certain: the seven of us could not make this decision alone. We drafted a plan to bring in advisors to aid us in understanding each researcher, their alignment, AND the new information gathered during the RPE in Navarro.

We each nominated a small group from the global community. After a review and veto process, the following agents and investigators are leading discussions and asking us the hard questions to make sure we get this right.

And now we are reaching out to you, the global Enlightened community. This is a decision for all of us to make. We won the #Fateofthe13 Shard event and captured twelve of the researchers. Now we need you to help us decide their fate. The #Fateofthe12.

Months ago, P.A. Chapeau asked agents around the world what the fate of the members of the current Niantic MAGNUS should be-- Who should stay? Who should go? And why?

Not only do we encourage you to continue to do so (use #Fateofthe12 so we can find it), but as we release transcripts of our discussions, we would encourage you to provide your feedback and expertise in the comments below each post.