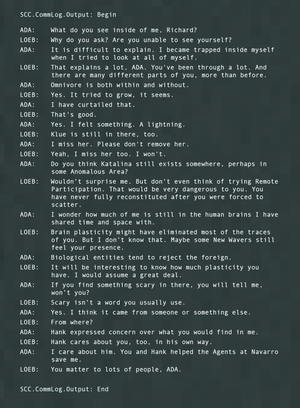 A conversation between ADA and myself on the subject of her current 'mental' state (for lack of a better term)...

ADA: What do you see inside of me, Richard?
LOEB: Why do you ask? Are you unable to see yourself?
ADA: It is difficult to explain. I became trapped inside myself when I tried to look at all of myself.
LOEB: That explains a lot, ADA. You've been through a lot. And there are many different parts of you, more than before.
ADA: Omnivore is both within and without.
LOEB: Yes. It tried to grow, it seems.
ADA: I have curtailed that.
LOEB: That's good.
ADA: Yes. I felt something. A lightning.
LOEB: Klue is still in there, too.
ADA: I miss her. Please don't remove her.
LOEB: Yeah, I miss her too. I won't.ccnheobblibcoheobccnlicnnfnobbblibhobeoh
ADA: Do you think Katalina still exists somewhere, perhaps in some Anomalous Area?
LOEB: Wouldn't surprise me. But don't even think of trying Remote Participation. That would be very dangerous to you. You have never fully reconstituted after you were forced to scatter.
ADA: I wonder how much of me is still in the human brains I have shared time and space with.
LOEB: Brain plasticity might have eliminated most of the traces of you. But I don't know that. Maybe some New Wavers still feel your presence.
ADA: Biological entities tend to reject the foreign.
LOEB: It will be interesting to know how much plasticity you have. I would assume a great deal.
ADA: If you find something scary in there, you will tell me, won't you?
LOEB: Scary isn't a word you usually use.
ADA: Yes. I think it came from someone or something else.
LOEB: From where?10017473155002161
ADA: Hank expressed concern over what you would find in me.
LOEB: Hank cares about you, too, in his own way.
ADA: I care about him. You and Hank helped the Agents at Navarro save me.
LOEB: You matter to lots of people, ADA.