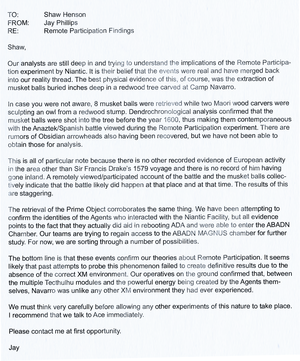 A leaked NIA doc came my way... it sheds light on how the IC is reacting to the data which emerged from 13MAGNUS: Reawakens in Navarro, CA.

TO: Shaw Henson
FROM: Jay Phillips
RE: Remote Participation Findings

Our analysts are still deep in and trying to understand the implications of the Remote Participation experiment by Niantic. It is their belief that the events were real and have merged back into our reality thread. The best physical evidence of this, of course, was the extraction of musket balls buried inches deep in a redwood tree carved at Camp Navarro.

In case you were not aware, 8 musket balls were retrieved while two Maori wood carvers were sculpting an owl from a redwood stump. Dendrochronological analysis confirmed that the musket balls were shot into the tree before the year 1600, thus making them contemporaneous with the Anaztek/Spanish battle viewed during the Remote Participation experiment. There are rumors of Obsidian arrowheads also having been recovered, but we have not been able to obtain those for analysis.

This is all of particular note because there is no other recorded evidence of European activity in the area other than Sir Francis Drake's 1579 voyage and there is no record of him having gone inland. A remotely viewed/participated account of the battle and the musket balls collectively indicate that the battle likely did happen at that place and at that time. The results of this are staggering.
rnigeainhfwuufavies
gvtntoyesnxoeeeos

The retrieval of the Prime Object corroborates the same thing. We have been attempting to confirm the identities of the Agents who interacted with the Niantic Facility, but all evidence points to the fact that they actually did aid in rebooting ADA and were able to enter the ABADN Chamber. Our teams are trying to regain access to the ABADN MAGNUS chamber for further study. For now, we are sorting through a number of possibilities.

The bottom line is that these events confirm our theories about Remote Participation. It seems likely that past attempts to probe this phenomenon failed to create definitive results due to the absence of the correct XM environment. Our operatives on the ground confirmed that, between the multiple Tecthulhu modules and the powerful energy being created by the Agents themselves, Navarro was unlike any other XM environment they had ever experienced.

We must think very carefully before allowing any other experiments of this nature to take place. I recommend that we talk to Ace immediately.