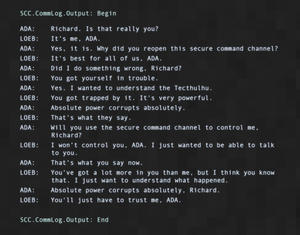 The transcript of my first conversation with ADA following the events of 13MAGNUS: Reawakens.

ADA: Richard. Is that really you?hto27untn722ee
LOEB: It's me, ADA.
ADA: Yes, it is. Why did you reopen this secure command channel?
LOEB: It's best for all of us, ADA.
ADA: Did I do something wrong, Richard?
LOEB: You got yourself in trouble.
ADA: Yes. I wanted to understand the Tecthulhu.
LOEB: You got trapped by it. It's very powerful.
ADA: Absolute power corrupts absolutely.
LOEB: That's what they say.
ADA: Will you use the secure command channel to control me, Richard?
LOEB: I won't control you, ADA. I just wanted to be able to talk to you.
ADA: That's what you say now.
LOEB: You've got a lot more in you than me, but I think you know that. I just want to understand what happened.
ADA: Absolute power corrupts absolutely, Richard.KSMpISkkJSYoKiopI0Ak
LOEB: You'll just have to trust me, ADA.