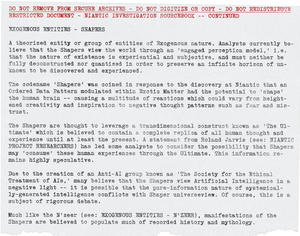 Another fragment of the IC-sourced document covering a multitude of aspects related to the ongoing Investigation of XM, Ingress and the Niantic Project.

Prior fragments of this document can be found here and here.

A theorized entity or group of entities of Exogenous nature. Analysts currently believe that the Shapers view the world through an 'engaged perception model,' i.e. that the nature of existence is experiential and subjective, and must neither be fully deconstructed nor quantized in order to preserve an infinite horizon of unknown to be discovered and experienced.

The codename 'Shapers' was coined in response to the discovery at Niantic that an Ordered Data Pattern modulated within Exotic Matter had the potential to 'shape' the human brain -- causing a multitude of reactions which could vary from heightened creativity and inspiration to negative thought patterns such as fear and mistrust.

The Shapers are thought to leverage a transdimensional construct known as 'The Ultimate' which is believed to contain a complete replica of all human thought and experience until at least the present. A statement from Roland Jarvis (see: NIANTIC PROJECT RESEARCHERS) has led some analysts to consider the possibility that Shapers may 'consume' these human experiences through the Ultimate. This information remains highly speculative.

Due to the creation of an Anti-AI group known as 'The Society for the Ethical Treatment of AIs,' many believe that the Shapers view Artificial Intelligence in a negative light -- it is possible that the pure-information nature of systemically-generated intelligence conflicts with Shaper universeview. Of course, this is a subject of rigorous debate.

Much like the N'zeer (see: EXOGENOUS ENTITIES - N'ZEER), manifestations of the Shapers are believed to populate much of recorded history and mythology.

(remaining portion of page could not be obtained)

H. Richard Loeb
2017/05/13 20:17
Another fragment of the IC-sourced document covering a multitude of aspects related to the ongoing Investigation of XM, Ingress and the Niantic Project.