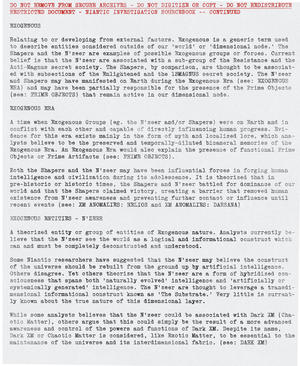 As I mentioned a few days ago, I was able to obtain some pages of this highly protected IC document that covers, in great detail, a number of aspects of the Niantic Investigation. Here is one of the sections that focuses on Exogenous forces, in particular the N'zeer. As I have said before -- despite the IC source on this, I personally consider this data to be fragmentary and in some cases inaccurate. The knowledge-base within our collective Investigative consciousness exceed that which seems to be represented here... As someone who's worked with or within the IC for a good section of my professional life, can I just say: Not. Surprised.

More of this to come in the days that follow...

Exogenous: Relating to or developing from external factors. Exogenous is a generic term used to describe entities considered outside of our 'world' or 'dimensional node.' The Shapers and the N'zeer are examples of possible Exogenous groups or forces. Current belief is that the N'zeer are associated with a sub-group of the Resistance and the Anti-Magnus secret society. The Shapers, by comparison, are thought to be associated with subsections of the Enlightened and the 13MAGNUS secret society. The N'zeer and Shapers may have manifested on Earth during the Exogenous Era (see: EXOGENOUS ERA) and may have been partially responsible for the presence of the Prime Objects (see: PRIME OBJECTS) that remain active in our dimensional node.

Exogenous Era: A time when Exogenous Groups (eg. the N'zeer and/or Shapers) were on Earth and in conflict with each other and capable of directly influencing human progress. Evidence for this era exists mainly in the form of myth and localized lore, which analysts believe to be the preserved and temporally-diluted bicameral memories of the Exogenous Era. An Exogenous Era would also explain the presence of functional Prime Objects or Prime Artifacts (see: PRIME OBJECTS).

Both the Shapers and the N'zeer may have been influential forces in forging human intelligence and civilization during its adolescence. It is theorized that in pre-historic or historic times, the Shapers and N'zeer battled for dominance of our world and that the Shapers claimed victory, creating a barrier that removed human existence from N'zeer awareness and preventing further contact or influence until recent events (see: RECENT XM ANOMALIES: HELIOS and RECENT XM ANOMALIES: DARSANA)

Exogenous Entities - N'zeer: A theorized entity or group of entities of Exogenous nature. Analysts currently believe that the N'zeer see the world as a logical and informational construct which can and must be completely deconstructed and understood.
na78e9pslaol8cs2up

Some Niantic researchers have suggested that the N'zeer may believe the construct of the universe should be rebuilt from the ground up by Artificial Intelligence. Others disagree. Yet others theorize that the N'zeer are a form of hybridized consciousness that spans both 'naturally evolved' intelligence and 'artificially or systemically generated' intelligence.

The N'zeer are thought to leverage a transdimensional informational construct known as 'The Substrate.' Very little is currently known about the true nature of this dimensional layer.
c3.b0.mzdvc.g.vy.y.x.
rpdm.v2a.th2a.w1o

While some analysts believes that the N'zeer could be associated with Dark XM (Chaotic Matter), others argue that this could simply be the result of a more advanced awareness and control of the power and function of Dark XM. Despite its name, Dark XM or Chaotic Matter is considered, like Exotic Matter, to be essential to the maintenance of the universe and its interdimensional fabric.

H. Richard Loeb
2017/05/09 09:12
As I mentioned a few days ago, I was able to obtain some pages of a highly protected IC document that covers, in great detail, a number of aspects of the Niantic Investigation. Here is one of the sections that focuses on Exogenous forces, in particular...