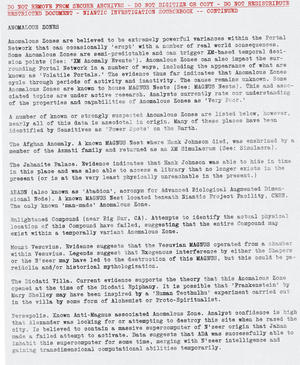 I've been able to gain access to a few pages of a highly protected IC (Intel Community) document about the ongoing investigation into XM, Niantic and Ingress. I will share these pages as and when it's safe to do so. This document was a real hot-potato to get a hold of, so I need to make sure my source can stay protected.

I should mention that I had a brief conversation with a highly respected member of the Niantic Investigation community yesterday (I will protect their anonymity at this stage) who is working on their own document of a very similar nature. It will be good to see that effort come to fruition.

Ultimately, the collaborative work emerging from this community is likely to exceed much of what the IC can accomplish using their old-world (and frankly, outdated) methods.

A number of known or strongly suspected Anomalous Zones are listed below, however, nearly all of this data is anecdotal in origin. Many of these places have been identified by Sensitives as 'Power Spots' on the Earth.

The Afghan Anomaly. A known MAGNUS Nest where Hank Johnson died, was enshrined by a member of the Azmati family and returned as an XM Simulacrum (See: Simulacra).

The Jahanite Palace. Evidence indicates that Hank Johnson was able to hide in time in this place and was also able to access a library that no longer exists in the present (or is at the very least physically unreachable in the present.)

Enlightened Compound (near Big Sur, CA). Attempts to identify the actual physical location of this Compound have failed, suggesting that the entire Compound may exist within a temporally variant Anomalous Zone.
Mount Vesuvius. Evidence suggests that the Vesuvian MAGNUS operated from a chamber within Vesuvius. Legends suggest that Exogenous interference by either the Shapers or the N'zeer may have led to the destruction of this MAGNUS, but this could be pareidolia and/or historical mythologization.
5r5epamrodx9r8k5

The Diodati Villa. Current evidence supports the theory that this Anomalous Zone opened at the time of the Diodati Epiphany. It is possible that 'Frankenstein' by Mary Shelley may have been inspired by a 'Human Tecthulhu' experiment carried out in the villa by some form of Alchemist or Proto-Spiritualist.bb-rre-rr-rre-rrr-e-c-rrr-rrr-yzq

Persepolis. Known Anti-Magnus associated Anomalous Zone. Analyst confidence is high that Alexander was looking for or attempting to destroy this site when he razed the city. Is believed to contain a massive supercomputer of N'zeer origin that Jahan made a failed attempt to activate. Data suggests that ADA was successfully able to inhabit this supercomputer for some time, merging with N'zeer intelligence and gaining transdimensional computational abilities temporarily.