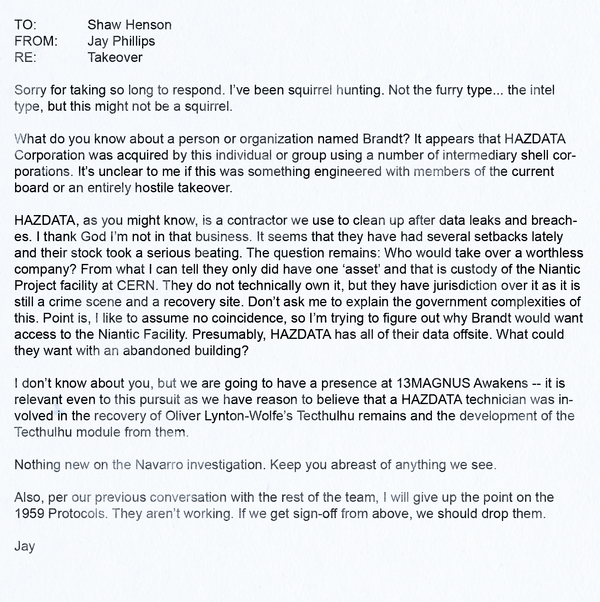 HAZDATA CHANGES HANDS?
May 2, 2017 · by PAC · in Intelligence and Other Media
I seem to recall hearing rumors about this before, but now it seems on better authority. HAZDATA, it appears, has changed hands, but it's unclear whether this is just the usual, shady, corporate shell game or an actual hostile takeover...

TRANSCRIPT:
TO: Shaw Henson
FROM: Jay Phillips
RE: Takeover

Sorry for taking so long to respond. I've been squirrel hunting. Not the furry type... the intel type, but this might not be a squirrel.

What do you know about a person or organization named Brandt? It appears that HAZDATA Corporation was acquired by this individual or group using a number of intermediary shell corporations. It's unclear to me if this was something engineered with members of the current board or an entirely hostile takeover.

HAZDATA, as you might know, is a contractor we use to clean up after data leaks and breaches. I thank God I'm not in that business. It seems that they have had several setbacks lately and their stock took a serious beating. The question remains: Who would take over a worthless company? From what I can tell they only did have one 'asset' and that is custody of the Niantic Project facility at CERN. They do not technically own it, but they have jurisdiction over it as it is still a crime scene and a recovery site. Don't ask me to explain the government complexities of this. Point is, I like to assume no coincidence, so I'm trying to figure out why Brandt would want access to the Niantic Facility. Presumably, HAZDATA has all of their data offsite. What could they want with an abandoned building?
bg4sc76ok7lpjy3
nn2pg8op45hj7or

I don't know about you, but we are going to have a presence at 13MAGNUS Awakens -- it is relevant even to this pursuit as we have reason to believe that a HAZDATA technician was involved in the recovery of Oliver Lynton-Wolfe's Tecthulhu remains and the development of the Tecthulhu module from them.

Nothing new on the Navarro investigation. Keep you abreast of anything we see.

Also, per our previous conversation with the rest of the team, I will give up the point on the 1959 Protocols. They aren't working. If we get sign-off from above, we should drop them.

H. Richard Loeb
2017/05/03 08:02
I seem to recall hearing rumors about this before, but now it seems on better authority. HAZDATA, it appears, has changed hands, but it's unclear whether this is just the usual, shady, corporate shell game or an actual hostile takeover..