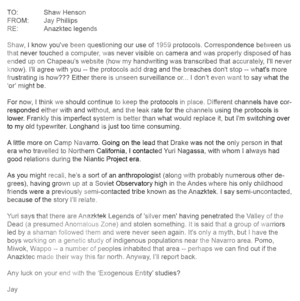 ANAZKTEC LEGENDS
April 25, 2017 · by PAC · in Intelligence and Other Media

Sorry Jay. I know I'm a bit of a thorn in your side. We just have different ways of going about what we think is best. Thanks for this intel though... the Anazktec connection to Navarro is very interesting...

TO: Shaw Henson
FROM: Jay Phillips
RE: Anazktec legends

Shaw, I know you've been questioning our use of 1959 protocols. Correspondence between us that never touched a computer, was never visible on camera and was properly disposed of has ended up on Chapeau's website (how my handwriting was transcribed that accurately, I'll never know). I'll agree with you -- the protocols add drag and the breaches don't stop -- what's more frustrating is how??? Either there is unseen surveillance or ... I don't even want to say what the 'or' might be.

For now, I think we should continue to keep the protocols in place. Different channels have cor­responded either with and without, and the leak rate for the channels using the protocols is lower. Frankly this imperfect system is better than what would replace it, but I'm switching over to my old typewriter. Longhand is just too time consuming.

A little more on Camp Navarro. Going on the lead that Drake was not the only person in that era who travelled to Northern California, I contacted Yuri Nagassa, with whom I always had good relations during the Niantic Project era.

As you might recall, he's a sort of an anthropologist (along with probably numerous other de­grees), having grown up at a Soviet Observatory high in the Andes where his only childhood friends were a previously semi-contacted tribe known as the Anazktek. I say semi-uncontacted, because of the story I'll relate.

Yuri says that there are Anazktek Legends of 'silver men' having penetrated the Valley of the Dead (a presumed Anomalous Zone) and stolen something. It is said that a group of warriors led by a shaman followed them and were never seen again. It's only a myth, but I have the boys working on a genetic study of indigenous populations near the Navarro area. Pomo, Miwok, Wappo -- a number of peoples inhabited that area -- perhaps we can find out if the Anazktec made their way this far north. Anyway, I'll report back.

Any luck on your end with the 'Exogenous Entity' studies?

H. Richard Loeb
2017/04/26 15:43
Sorry Jay. I know I'm a bit of a thorn in your side. We just have different ways of going about what we think is best. Thanks for this intel though... the Anazktec connection to Navarro is very interesting...