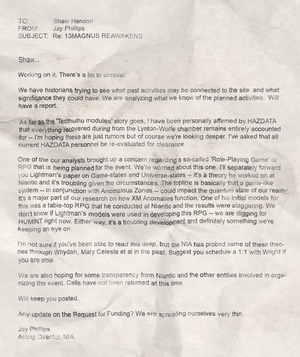 Jay Phillips' response to the recent query from Shaw Hensonabout the MAGNUS event in Navarro, CA.

Some interesting news here... Be curious what you all make of this...

Working on it. There's a lot to unravel.

We have historians trying to see what past activities may be connected to the site and what significance they could have. We are analyzing what we know of the planned activities. Will have a report.

As far as the 'Tecthulhu modules' story goes, I have been personally affirmed by HAZDATA that everything recovered during from the Lynton-Wolfe chamber remains entirely accounted for -- I'm hoping these are just rumors but of course we're looking deeper. I've asked that all current HAZDATA personnel be re-evaluated for clearance.
t6gxmp6ie4urkw65

One of the our analysts brought up a concern regarding a so-called 'Role-Playing Game' or RPG that is being planned for the event. We're worried about this one. I'll separately forward you Lightman's paper on Game-states and Universe-states -- it's a theory he worked on at Niantic and it's troubling given the circumstances. The topline is basically that a game-like system -- in conjunction with Anomalous Zones -- could impact the quantum state of our reality. It's a major part of our research on how XM Anomalies function. One of his initial models for this was a table-top RPG that he conducted at Niantic and the results were staggering. We don't know if Lightman's models were used in developing this RPG -- we are digging for HUMINT right now. Either way, it's a troubling development and definitely something we're keeping an eye on.

I'm not sure if you've been able to read this deep, but the NIA has probed some of these theories through Whydah, Mary Celeste et al in the past. Suggest you schedule a 1:1 with Wright if you are able.

We are also hoping for some transparency from Niantic and the other entities involved in organizing the event. Calls have not been returned at this time.
xaemrqmguerhodvfahlms

Will keep you posted.

Any update on the Request for Funding? We are spreading ourselves very thin...

H. Richard Loeb
2017/04/14
Jay Phillips' response to the recent query from Shaw Henson about the MAGNUS event in Navarro, CA. Some interesting news here... Be curious what you all make of this...