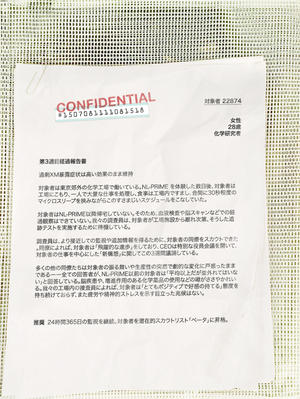 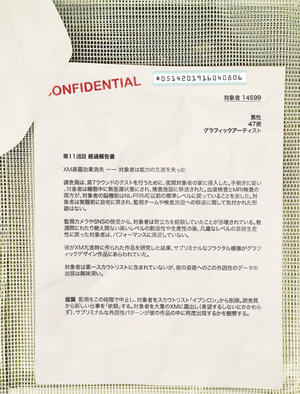 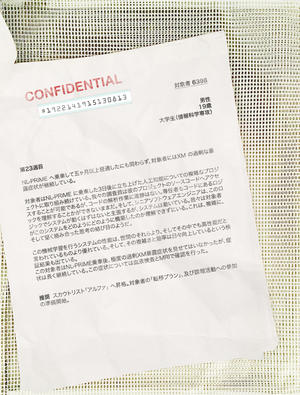 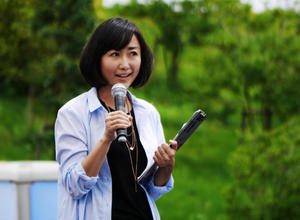 Some days ago I was able to obtain one of the pieces of intelligence surrounding Akira Tsukasa's mysterious XM research vehicle, NL-PRIME.

I came across this post from an Agent on Google+ recently -- this Agent surfaced a translation of all three pieces of intel which had been created by Ingress Agent YutoRaion. The documents reveal much about NL-PRIME's secret... and dark... undertakings...

The subject is working at chemical plant in the suburbs of Tokyo. A few days after experiencing NL-PRIME, the subjects stayed at the factory, handled a large amount of work by themselves, finished meals in the factory, and had this extraordinary schedule while holding a microsleep of about 30 seconds.

The subject has not returned home since NL-PRIME. Therefore, follow-up observation with blood test, brain scan, etc. has not been completed. Our investigators are waiting for the follow-up test to be carried out as soon as the subject leaves the improvement facility.

Investigators were able to scout their subject colleagues to obtain closer monitoring and additional information. According to colleagues, the subjects have made "a dramatic advance" and the CEO has held a special board meeting and discusses the "new concept" centered on the work of the subject for the past three weeks.cmx34ofrar754mm

Many other colleagues are puzzled by sudden and dramatic changes in subject behavior and productivity -- All respondents replied that subjects before NL-PRIME were "above average but not extraordinary". Rumors such as brain diseases and the use of chemicals with enhancing action are being whispered. According to our investigators, subjects do not have a "very positive and favorable" attitude and there are no noticeable signs of fatigue or mental stress.

Investigators invaded the nighttime subject's house to conduct the seventh round of testing. Subjects were put into unconscious state during sleep and transported to the laboratory as instructed. Both blood tests and MRI tests showed that the subject's brain function returned to the standard level before NL-PRIME. Subjects were returned to their homes before awakening, and there was no sign of being noticed regarding the transfer to surveillance teams and laboratories.

It was suggested that subjects were experiencing irritation from surveillance cameras and SNS interception. Subjects who returned to a mediocre level artistic productivity after a couple of weeks of high level of creativity and productivity are not satisfied with the performance.

As a result of studying works he made during the XM hike, subliminal fractal patterns appeared in graphic design works.

Subjects are not included in the first scout list, but the appearance of this extrinsic data to his art is interesting.

Recommend: Stop monitoring at this stage and remove the subject from the scout list "Epsilon". "Invite" a new job from the investigator. Examine the subject to a large amount of XM (whether or not you want) and observe whether a subliminal extrinsic pattern reappears in his work.7a9a78a8a9898c8e8d7b889a87afafae8f98

Despite the fact that he has traveled to NL-PRIME for more than five months, XM's excessive exposure symptoms continue to the subjects.

Subjects continue to work on complex projects on A.I. launched three days after boarding NL-PRIME. Our investigators are able to access the source code of his project, but there is no progress in analyzing the code. The full-time person still can not understand the logic in the code. And senior software engineers insist that this system should not work with this logic, but the system is running. We are unable to understand how the subject constructed this system. It seems like a knot of complex and tightly intertwined thinking.

The performance of this machine learning system is superior to those of the world and among them among those which are said to be high performance. And there are verification results that its complexity and efficiency are improving day by day.

After the appearance of NL-PRIME, this subject did not show extreme excessive XM exposure symptoms, but the symptoms persisted for a long time. This symptom was confirmed by blood test and MRI.

via Agent Michell Smith on Google+