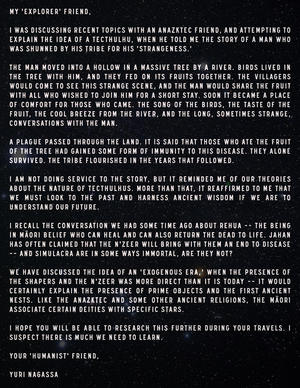 Yesterday, Hank Johnson met up with a large group of Agents in Christchurch, New Zealand. Accounts vary, but I've heard that between 50 and 80 Agents came to meet the Explorer...

He was fairly tightlipped to me about what he was researching there -- if any Agents who spoke with him know any further details, please let us know in the comments.

What I do know is that intel above was recovered by Agents on the ground there via a Mission.

I was discussing recent topics with an Anazktec friend, and attempting to explain the idea of a Tecthulhu, when he told me the story of a man who was shunned by his tribe for his 'strangeness.'

The man moved into a hollow in a massive tree by a river. Birds lived in the tree with him, and they fed on its fruits together. The villagers would come to see this strange scene, and the man would share the fruit with all who wished to join him for a short stay. Soon it became a place of comfort for those who came. The song of the birds, the taste of the fruit, the cool breeze from the river, and the long, sometimes strange, conversations with the man.
7e8a97aba888767c7
b967d76a8a8a89a78

A plague passed through the land. It is said that those who ate the fruit of the tree had gained some form of immunity to this disease. They alone survived. the tribe flourished in the years that followed.

I am not doing service to the story, but it reminded me of our theories about the nature of Tecthulhus. More than that, it reaffirmed to me that we must look to the past and harness ancient wisdom if we are to understand our future.
uejjdiffihfgz

I recall the conversation we had some time ago about Rehua -- the being in Māori belief who can heal and can also return the dead to life. Jahan has often claimed that the N'zeer will bring with them an end to disease -- and Simulacra are in some ways immortal, are they not?

We have discussed the idea of an 'Exogenous Era,' when the presence of the Shapers and the N'zeer was more direct than it is today -- it would certainly explain the presence of Prime Objects and the first ancient nests. Like the Anazktec and some other ancient religions, the Māori associate certain deities with specific stars.

I hope you will be able to research this further during your travels. I suspect there is much we need to learn.

H. Richard Loeb
2017/03/15 15:15
Yesterday, Hank Johnson met up with a large group of Agents in Christchurch, New Zealand. He was fairly tightlipped to me about what he was researching there -- what I do know is that intel above was recovered by Agents on the ground there via a Mission.