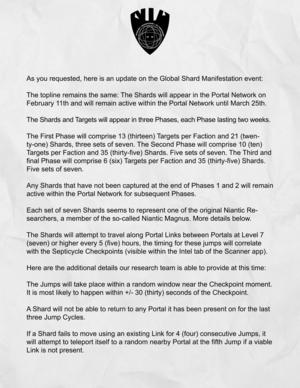 NIA SHARD MANIFESTATION DOCUMENT
February 10, 2017 · by PAC · in Intelligence and Other Media

I've been able to obtain this high-level NIA document that contains all known details about the upcoming Global Shard Manifestation Event.

I have transcribed its contents below:

As you requested, here is an update on the Global Shard Manifestation event:

The Shards and Targets will appear in three Phases, each Phase lasting two weeks.

Any Shards that have not been captured at the end of Phases 1 and 2 will remain active within the Portal Network for subsequent Phases.

Each set of seven Shards seems to represent one of the original Niantic Researchers, a member of the so-called Niantic Magnus. More details below.

The Shards will attempt to travel along Portal Links between Portals at Level 7 (seven) or higher every 5 (five) hours, the timing for these jumps will correlate with the Septicycle Checkpoints (visible within the Intel tab of the Scanner app).

Here are the additional details our research team is able to provide at this time:

The Jumps will take place within a random window near the Checkpoint moment. It is most likely to happen within +/- 30 (thirty) seconds of the Checkpoint.

A Shard will not be able to return to any Portal it has been present on for the last three Jump Cycles.

If a Shard fails to move using an existing Link for 4 (four) consecutive Jumps, it will attempt to teleport itself to a random nearby Portal at the fifth Jump if a viable Link is not present. 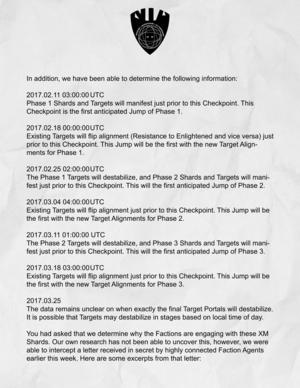 In addition, we have been able to determine the following information:

2017.02.18 00:00:00 UTC
Existing Targets will flip alignment (Resistance to Enlightened and vice versa) just prior to this Checkpoint. This Jump will be the first with the new Target Alignments for Phase 1.

2017.02.25 02:00:00 UTC
The Phase 1 Targets will destabilize, and Phase 2 Shards and Targets will manifest just prior to this Checkpoint. This will the first anticipated Jump of Phase 2.

2017.03.04 04:00:00 UTC
Existing Targets will flip alignment just prior to this Checkpoint. This Jump will be the first with the new Target Alignments for Phase 2.

2017.03.11 01:00:00 UTC
The Phase 2 Targets will destabilize, and Phase 3 Shards and Targets will manifest just prior to this Checkpoint. This will the first anticipated Jump of Phase 3.

2017.03.18 03:00:00 UTC
Existing Targets will flip alignment just prior to this Checkpoint. This Jump will be the first with the new Target Alignments for Phase 3.

2017.03.25
The data remains unclear on when exactly the final Target Portals will destabilize. It is possible that Targets may destabilize in stages based on local time of day.

You had asked that we determine why the Factions are engaging with these XM Shards. Our own research has not been able to uncover this, however, we were able to intercept a letter received in secret by highly connected Faction Agents earlier this week. Here are some excerpts from that letter: 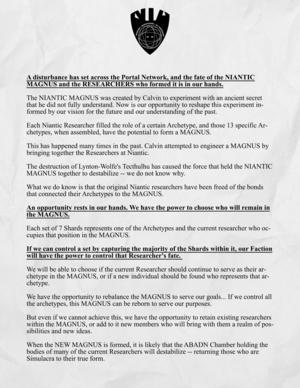 A disturbance has set across the Portal Network, and the fate of the NIANTIC MAGNUS and the RESEARCHERS who formed it is in our hands.

The NIANTIC MAGNUS was created by Calvin to experiment with an ancient secret that he did not fully understand. Now is our opportunity to reshape this experiment informed by our vision for the future and our understanding of the past.

Each Niantic Researcher filled the role of a certain Archetype, and those 13 specific Archetypes, when assembled, have the potential to form a MAGNUS.

This has happened many times in the past. Calvin attempted to engineer a MAGNUS by bringing together the Researchers at Niantic.

The destruction of Lynton-Wolfe's Tecthulhu has caused the force that held the NIANTIC MAGNUS together to destabilize -- we do not know why.

What we do know is that the original Niantic researchers have been freed of the bonds that connected their Archetypes to the MAGNUS.

An opportunity rests in our hands. We have the power to choose who will remain in the MAGNUS.

Each set of 7 Shards represents one of the Archetypes and the current researcher who occupies that position in the MAGNUS.

If we can control a set by capturing the majority of the Shards within it, our Faction will have the power to control that Researcher's fate.

We will be able to choose if the current Researcher should continue to serve as their archetype in the MAGNUS, or if a new individual should be found who represents that archetype.

We have the opportunity to rebalance the MAGNUS to serve our goals... If we control all the archetypes, this MAGNUS can be reborn to serve our purposes.

But even if we cannot achieve this, we have the opportunity to retain existing researchers within the MAGNUS, or add to it new members who will bring with them a realm of possibilities and new ideas.

When the NEW MAGNUS is formed, it is likely that the ABADN Chamber holding the bodies of many of the current Researchers will destabilize -- returning those who are Simulacra to their true form.